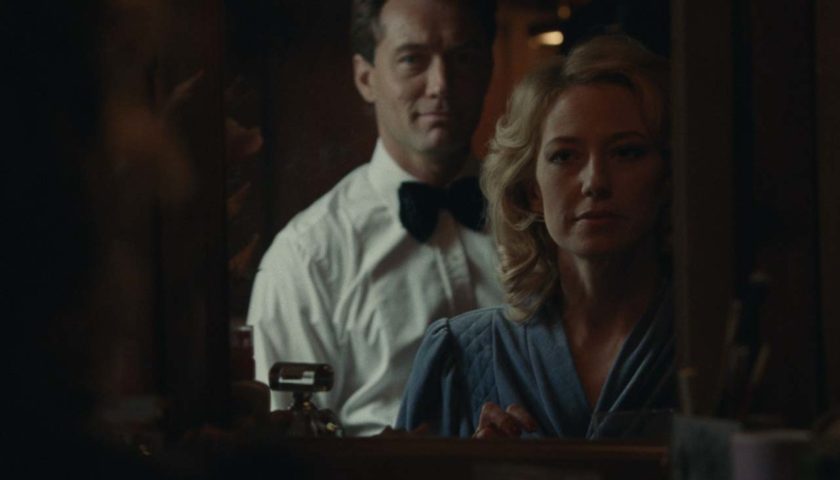 All work and no play makes Rory O’Hara a dull boy — which is to say, one can scarcely overlook the connections between Sean Durkin’s subtly unsettling second feature, “The Nest,” and Stanley Kubrick’s “The Shining,” even if this is by far the more tedious of the two movies. While the obsessive dad Jude Law plays here doesn’t fly off the handle quite so spectacularly as Jack Nicholson did, the horror hits closer to home, since what’s haunting the O’Haras isn’t supernatural. Rather, this family’s unraveling, which likewise follows a big move to a spooky new abode, has more to do with all the baggage they’ve brought with them.

Nine years after “Martha Marcy May Marlene,” an unnerving art-house chiller that’s since achieved cult status among cinephiles, Durkin returns to the Sundance Film Festival with a movie that’s considerably more challenging, and arguably more accomplished as well — although paying audiences aren’t likely to appreciate the crystalline intricacy of what he’s trying to achieve here. That’s because “The Nest” is not a traditional genre movie after all, although it may feel like one going in. Those seeking boogie-boogie scares would do well to adjust their expectations. Commercial prospects are iffier than shares in a Norwegian fish farm during a recession, which is a shame, since the meticulously mounted film won’t translate well to the small screen, and feels like a no-go for streaming.

The real point of comparison between “The Nest” and a movie like “The Shining” lies in the psychological toll that a selfish father can have on his family. In a sense, it has more in common with “Marriage Story” or “The Souvenir” — films about destructive male ego told, at least in part, from a female point of view. Rory may be the first character we meet, but the movie ultimately favors Allison (Carrie Coon), the screw-turning wife seemingly conjured from one of those ghostly classics where sinister things happen when a family relocates to freaky new digs.

One day, after at least a decade spent living in the States, English-born Rory announces that he plans to uproot Allison and their two kids, son Ben (Charlie Shotwell) and stepdaughter Sam (Oona Roche), in order to pursue “an opportunity” back in London. Although she sincerely loves her husband, Allison is justified when she tells her mother, “Something doesn’t feel right.”

“It’s not your job to worry,” Mom tells her. “Leave that to your husband.” It’s a telling line, and one that reflects widespread attitudes of the period in which “The Nest” is set. Durkin, who spent time in both England and the U.S. as a child, sets the film in the mid-1980s, when women were expected to “honor” their husbands, and divorce wasn’t nearly so common.

The movie opens with a long shot of a spacious suburban home, with two cars parked in its driveway. The O’Haras are living the dream, the American dream, which Durkin indicates via clues that audiences aren’t necessarily attuned to interpreting. It doesn’t help that perks that seemed like luxuries 35 years ago are now taken for granted. Back then, how many homes had automated espresso machines in their kitchens? (Ours didn’t even have a VCR.) Rory has achieved a level of economic and emotional success that allows the O’Haras to live more comfortably than the vast majority of Americans. But it’s not enough, not for Rory.

He’s found a posh mansion in Surrey, England, which he rents for more than he can afford. Allison’s concern heightens when she sees the place, whereas the kids (oblivious to the family’s finances) are intimidated by the house itself, which could be haunted. The suggestion is a red herring, mind you, although a handful of scenes involving Allison’s horse may leave permanent scars upon your psyche.

Rory works in finance. Complex calculations of risk and reward are his specialty. But in this case, he’s gambling on his family’s comfort and happiness. “I had a sh—y childhood, and I deserve this!” he bellows late in the film. That line, plus a visit to his mother, whom he hasn’t seen in years, reveal an awful lot about his motivations. Rory wants his mom to see his new home, to meet the “beautiful blond American gal” he married, and to show his son the affection that Rory was denied. (He conveniently neglects to mention Sam, who isn’t his biological daughter, and whom he sends to a so-so high school, while paying for Ben to attend the best private academy around.)

When she married Rory, Allison never imagined that her own identity would be so eclipsed by what pop philosopher Alain de Botton dubbed “status anxiety.” His is a seemingly incurable case: The harder Rory tries to prove himself to others, the more dangerous he becomes to his own family. (There’s a reason Allison hides her money from her husband.) Tapping into the dark side of his own allure, Law’s great in the role, although the scenes Durkin uses to dramatize Rory’s downward spiral will drive most folks to boredom. Coon tends to be more captivating: She starts out an unequal partner, but slowly assumes more power as her husband loses control of a situation he created.

Collaborating with Hungarian cinematographer Mátyás Erdély (“Miss Bala,” “Son of Saul”), Durkin maintains a chilly distance from his characters for much of the film. There are exceptions, including a more tightly framed sex scene designed to suggest the connection that, we hope, will carry the couple through the challenges ahead. But most of the time, “The Nest” feels clinical, requiring audiences to put in a level of detective work that even the O’Haras haven’t committed to their own cause.

Movies almost never deal with the intricacies of marriage: finances, schooling, finding the right work-life balance. By contrast, “The Nest” burrows into the minutiae, and the rewards of going along with the O’Haras are worth it, at least for those willing to risk the frustration of a movie that plays by its own rules and doesn’t necessarily believe in happy endings.