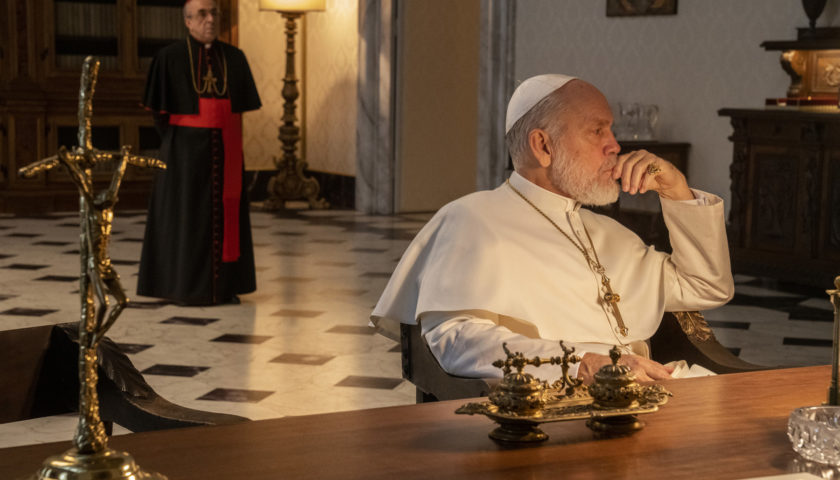 Three years ago, Paolo Sorrentino’s “The Young Pope” crash-landed onto American airwaves. The Italian auteur’s series, which envisioned a sharp-tongued New Yorker bringing the Holy See to heel, was so surreal that it tended to elicit responses of confusion and revulsion from mainstream observers, but for those on its wavelength, it was both an aptly-timed portrait of an egomaniac granted the powers of state and a visual feast with all the ornate peculiarity of its subject, institutional Catholicism.

It also ended, and definitively enough; while the story of “The Young Pope” left a few mysteries to be solved — well, so too did the Bible. One must have faith and continue the story on one’s own in the church pew, but TV, lately, can be counted on to give more of what one wants than is really needed. In that tradition comes “The New Pope,” a sequel series that apes, unsuccessfully, what was so special about the first’s achievement.

We enter the story with Jude Law’s Pius XIII still in a coma (and appearing in fantasy sequences); an early replacement, installed by a Machiavellian cardinal (Silvio Orlando) as a puppet develops, too early, a mind of his own and is dealt with accordingly. This stutter-stepping means that it takes a frustratingly long time for the actual story of the season — the rise of John Malkovich’s “new Pope” — to get underway.

The time we spend waiting for the action to begin, meandering around the corridors of Sorrentino’s strange and splendiferous Vatican feels less novel than it once did, and not merely because it’s a second visit; the show less develops its universe than restates it, less forcefully. In “The Young Pope,” Law’s rapacious performance balanced the will to power with naivete — he was as delighted to wield power as we were to watch him do so. He also, crucially, was shepherded by Diane Keaton’s Sister Mary, a sort of avatar of relatable good sense who provided us a way into the story; this time, our only way in is that we’ve been here before. Malkovich’s John Brannox, later Pope John Paul III, is harder to read; his politics are less about power and dominance than a silkier sort of finesse. A viewer’s tolerance will vary, but it is striking to have a show that seems almost to demand a massive central performance suddenly defined by understatement, by refusal.

What’s more, the statement the show makes about the Vatican seems more muddled than ever. In “The Young Pope,” we saw a church vulnerable to being overtaken by one man with a dark vision of his own potential as a transformative figure. (One of the few genuinely, “Young Pope”-style startling moments in the new series’s early going is an Italian radio station giving themselves over to broadcasting the comatose Pius’s breathing, 24 hours a day. The bereaved give themselves over to listening.) In “The New Pope,” what’s ultimately new is the gnomic unknowability of the man at the center of the intrigue. Malkovich’s often-docile, unmilitant pontiff is undercut yet further by the repetitiousness of the plot around him (the cardinals wonder if they’ve made a mistake, again) and by interactions with celebrities cameoing — from a blandly likable Marilyn Manson to a badly misused Sharon Stone. The Pope asks Stone, as herself, to refrain from uncrossing and recrossing her legs in front of him, a joke warmed over from 1992 about a genuinely able performer.

That throwaway moment sums up “The New Pope” as well as anything could. It’s a show with so much at its disposal — John Malkovich and Sharon Stone sharing a scene! Sorrentino’s visual imagination! A complex and fascinating universe already established! — and one that uses all that to do what it’s done before, less well. It may have Law and Malkovich as an odd-couple sort of father and son. But this time around, it lacks spirit.