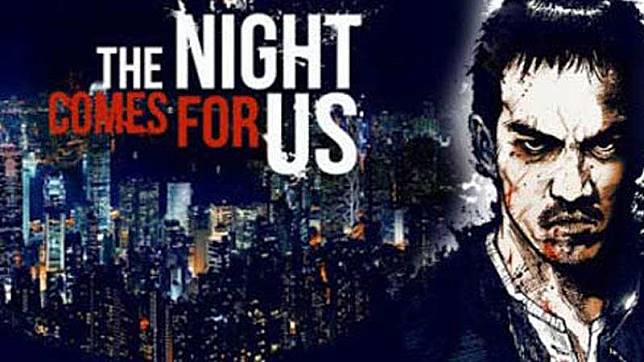 Review: Some action movies are content simply entertaining, but others also strive to educate. For instance, did you know Indonesians have five times as much blood in their bodies as non-Indonesians? That’s just one of the informative tidbits found in Timo Tjahjanto‘s vicious, violent, and very satisfying The Night Comes for Us. The plot is a bit unclear at times, but the action? The sweet, sweet action? It is brutal. It is copious. It is exhilarating. And it makes this the best action movie of 2018.

When members of a small village dare to steal from the drug-running Triads they’re quickly massacred as a message to future thieves, but one young girl survives. Reina witnesses her mother’s slaughter, but the enforcer taking aim on her instead turns his gun on the other gangsters. Ito (Joe Taslim) makes a decision in that moment he can’t turn back from, and while saving her life might just save his soul his action has consequences. And those consequences include having to fight his way through half of Indonesia leaving a river of blood in his wake. So yes, it’s the remake of John Cassavetes’ Gloria you never knew you needed.

Tjahhanto co-directed three features as part of “The Mo Brothers” alongside Kimo Stamboel — Macabre (2009), Killers (2014), Headshot (2016) — and while the three vary somewhat in genre intent the main thread connecting them all is an appreciation for gory, grisly violence. 2018 sees him go solo in the director’s chair with not one but two new movies. May the Devil Take You is his perfectly competent riff on haunted house/possession tales, but it’s his second film of the year that immediately marks him as one of the best action directors working today. The Night Comes for Us retains Tjahjanto’s love for bodily abuse but raises the action bar by delivering an experience that equals the deliriously entertaining and exquisitely choreographed fight scenes of The Raid films.

It may lack The Raid: Redemption‘s narrative simplicity and The Raid 2‘s gorgeous cinematography, but in specific regard to the action, momentum, and beautiful, bone-breaking fight sequences this is a blistering and aggressively thrilling action masterpiece. Your own muscles will ache while watching it as you tense in anticipation, excitement, and sympathy for the brutal beatings you’re witnessing on the screen. No real body could take this kind of abuse for very long — hell, I’m pretty confident that any one of these hits would end me — but while most opponents are dispatched quickly and painfully there are a few brawls that go the distance including a third act face-off of epic proportions. Tjahjanto knows it’s insane, but he plays it serious and pushes his two leads to nearly absurd extremes in a fight that rivals any of the one-on-one fights in Gareth Evans’ films.

And I don’t say that lightly.

As mentioned, the plot is far more convoluted than it needs to be and involves secret Triad leaders called the Six Seas, mysterious assassins with high-tech motorcycle helmets, ever-changing loyalties, and flashbacks that do more to pad the running time than add to the experience, but — and this is a big but — you won’t give a single solitary shit because the action is that goddamn beautiful and relentless. Similarly, budgetary restraints rear their ugly head at times in the visual effects helping to mark the biggest distinction between this and Evans’ second Raid film, but it’s no hyperbole to say the action is on par beat for bloody beat.

Taslim takes the antihero lead here and shows he’s more than capable of heading up his own feature. His fighting skills are effective and visceral, and while his performance is good his greatest contribution on that front is a series of facial expressions channeling rage and madness in equally terrifying measure. The other headliner here is the amazing Iko Uwais, and after the dishonor done to his skills with the recent Mile 22it’s ridiculously satisfying seeing him once again given the freedom to unleash hell on his enemies. His introductory scene here is alone better than the entirety of Peter Berg’s incompetent misfire.

The film also features not one, not two, but three kick-ass female fighters each with their own style and presence. Julie Estelle, Hammer Girl herself from The Raid 2, is back and once again brightens up the screen with slick, highly efficient badassery, and she’s joined by a pair of female villains who exude a deadly cool in their weapons of choice and attitudes. They go up against Estelle’s character in one of the film’s finest set-pieces that like a few others will most likely leave viewers cheering.

The Night Comes for Us is action movie nirvana designed to deliver nearly two hours of bloody bliss, physical mayhem, and symphonic violence — and it succeeds brilliantly.