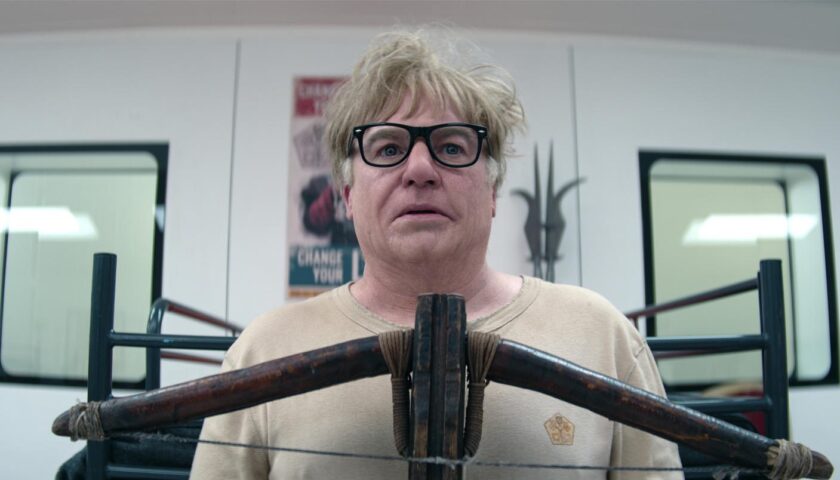 My great auntie’s definition of a good book – probably a lot of great aunties’, maybe all great aunties’ – was “one that takes you out of yourself”. It is all I am looking for these days, from any of my entertainment media. Those who feel the same will fall like ravening beasts on The Pentaverate (Netflix). This is a six-episode piece of accomplished idiocy by Mike Myers, who has been specialising in such since the early 90s via Saturday Night Live, Wayne’s World, Austin Powers, the Shrek franchise and assorted other ventures

Like Austin Powers, The Pentaverate has Myers playing multiple roles – so many, in fact, that, unless I say otherwise, you can assume all the characters mentioned here are played by him. This includes most of the Pentaverate, a secret society that is, unlike most secret societies, benevolent. (“They’re nice!” they say. We are informed of this at the beginning of every episode via a voiceover by Jeremy Irons, enjoying himself hugely in maximum Jeremy Irons mode.)

It was founded in 1347 by five learned men who were denounced as heretics when they worked out that rat fleas, rather than divine will, caused the plague. It has worked behind the scenes for the good of humanity ever since. Darwin, Leonardo, Nelson Mandela and the Quaker Oats guy have all been members. Donald Rumsfeld was a rejected candidate. Billie Eilish is a future member – she will join in 2047. Beyoncé Knowles is with the Illuminati, but working as a Pentaverate double agent.

After the untimely and suspicious death of the Pentaverate member Eccleston, the society convinces a reluctant nuclear physicist, Hobart Clark (Keegan-Michael Key), to help them tackle the climate crisis. Rob Lowe, having as much fun as Irons, guides him through the initiation.

When a mild-mannered Canadian journalist, Ken Scarborough, is given one last chance to bring back a hard-hitting story to save his job, he and his feisty assistant Reilly (Lydia West) begin investigating the existence of the rumoured society by travelling to New York, getting Scarborough into the society’s Liechtenstein Guard (you need a key fob and a circumcised penis) and becoming caught up in the attempts to destroy the Pentaverate by people in pursuit of gains far in excess of one meeeeellion dollars.

But the plot hardly matters. It is the thread upon which Myers can string his beads, including his turn as the ranting Maga-loon Rex Smith, who uses his radio show, Truth Battle, to nonsensically mangle buzzwords in his breathless diatribes against liberals “who dance naked, giving each other lizardman courtesy reacharounds as a sacrifice to the meme-momo”. There are whistlestop gags during Ken and Reilly’s roadtrip about Big Dick’s Halfway Inn and its companion further along the highway, Big Dick’s Old Log (in Nuts Deep). Jennifer Saunders pitches in as the Maester of Dubrovnik, who investigates Eccleston’s death and finds he has been poisoned by a toxin called donnett, which turned the victim’s brown eyes blue. One for all the fans of country singer Crystal Gayle, there.

It is a sweet, silly, charmingly harmless thing – and funny, if you like that sort of thing, or if you are scrabbling around for any succour you can find. You could do better; you could do worse. But for between 25 and 28 minutes at a time, it should take you out of yourself and into a world of mustard-robed elders, bum jokes and general daftness. Scrabble and ye shall find.