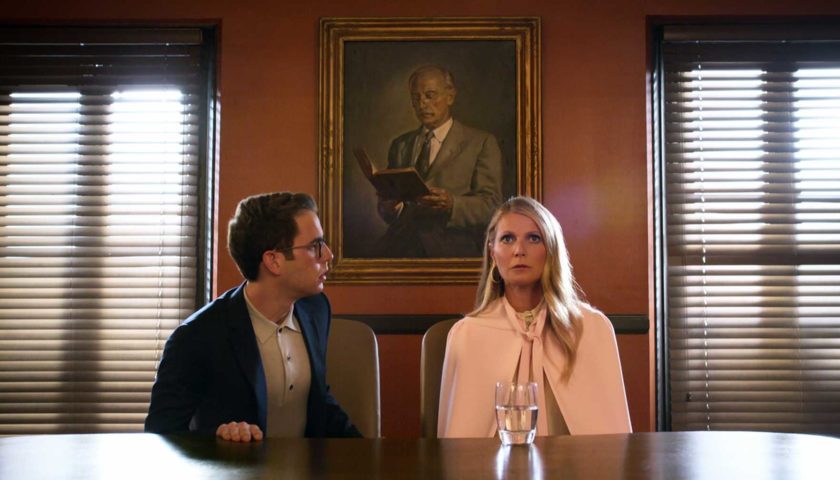 Payton is an ambitious young man. He is going to become a U.S. President (this is a fact, not a dream, according to him) and in order to do that, he must first become the school president of the well-to-do Saint Sebastian High School in Santa Barbara, California before attending Harvard. Payton was born under a lucky star, adopted out of a working-class world and into the obscenely wealthy Hobart family. With very posh mom Georgina (Paltrow) cheering him on at the homefront and bolstered by a supportive girlfriend, Alice (Julia Schlaepfer), and close friends and campaign advisors, James (Theo Germaine) and McAfee (Julia Dreyfuss), Payton is a force to be reckoned with. He’s a born politician, if one of the first school debates is anything to go by, and believes he is the candidate Saint Sebastian needs until his opposition. That is, until Astrid (Boynton), plants her stake in the ground as a formidable candidate. Soon, Payton, James, McAfee, and Alice find themselves doing whatever it takes and pulling from the playbooks of more successful politicians to get Payton the seat he feels he deserves.

There’s enough to latch onto in The Politician‘s premiere episode (season 1 has eight episodes total and I was able to watch them all for this review) that it feels like this show has potential. When it comes to tone, The Politician is reminiscent of Glee in its introduction of a colorful array of characters and Election in the way it sets up a too-cutthroat-for-its-own-good high school campaign season. There are touches of Wes Anderson in the costume design, dialogue, and mise-en-scene that allow for a particular archness to infiltrate every scene. At times, this is charming. More often than not, it’s just a pass for series writers Murphy, Brad Falchuk, and Ian Brennan to put cringey, vain, awkward, and/or borderline problematic dialogue into the mouths of their characters. This stings all the more when you have a majority of characters who are noticeably privileged, able-bodied, and white floating around and dictating the course of events.

All I can say is thank goodness for Platt. He has the talent and ability to credibly play Payton, making him into a layered, actually interesting human being who actively transcends the otherwise confining borders of his character. Platt makes Payton a credibly ambitious young man with a heart of gold, someone who can access pools of emotion hidden behind walls during the more tender moments. Through the actor, Payton is humanized and, despite his nauseatingly fortunate upbringing, we quickly come to realize that for him there is no amount of money that can buy the kind of happiness and fulfillment he seeks. The show also has the smarts to let this Tony-winning actor sing once during the series and it’s maybe the best three minutes on offer.

Platt is a standout performance and it’s not simply because he’s got the goods (and boy, does he have them). Unfortunately for the rest of the cast, despite the all of their talents and efforts, Platt manages to outshine them because they are comparatively given so little to work with. The only real competition for plaudits is Lange and Paltrow. Even when they’re stuck in one mode, they have the wherewithal to still make a meal out of it. Lange is allowed to go full lowkey-villain as we’ve seen in, say, American Horror Story: Asylum, as the obviously manipulative grandmother of Deutch’s character. She’s trashy, she’s cheeky, she’s chewing up the scenery when she can and please, sir, may I have some more!

As for Paltrow, it’s really tough not to wonder if she just appeared on set one day, floating down from her Goop-covered cloud, and they just turned the cameras on. Her performance as Georgina — a woman who has married well, plays at philanthropist, is a doting mother, and is fabulously unbothered by the perils of the world unless her fortunes are threatened — feels like a heightened version of her actual public persona. To wit, in the premiere episode, she is painting a portrait of a child killed in a Syrian airstrike for a charity fundraiser and I squirmed nearly out of my seat.

Boynton, Deutch, Schlaepfer, Germaine, Dreyfuss, and Rahne Jones, who plays Astrid’s running mate Skye, are all doing their damnedest here and to that, I tip my cap. But they’ve fallen into a classic Murphy trap: playing stiff archetypes who operate based on one characteristic. There’s a rich bitch, a queer and gender non-conforming radical person of color, a shy girl, and two outspoken but devoted best friends who give their all to someone else’s story. But who are they? What motivates them? We don’t get to watch these clearly talented actors play more than one note.

This is perhaps one of the biggest grievances I have with The Politician. I commend Murphy, Falchuk, and Brennan for attempting to inject satire into a world where, for example, the Gen Z politicians of today believe a good political strategy is to release official statements on social media in an effort to boost polling numbers. But in an attempt to incorporate an array of modern characters who seem to tap into different aspects of a generation it is speaking to, I have to wonder if it was smart that this trio wrote this story with these characters, turning their creation in a bullhorn shouting out observations of specific generational burdens and changes they are not partaking in.

For all of its beauty — and truly, The Politician is a study in opulence porn on a level that makes Succession look positively middle-class — and all of its decent direction and its acceptable-to-memorable performances, I still don’t think The Politician knows what kind of show it wants to be or what kind of politics it wants to espouse. Payton has grand ideas about the changes he wants to make at Saint Sebastian, the kinds of intersectional, uplifting, necessary changes we think are easy to enact when we’re 17 and have optimism on our side. Because Payton is the heartbeat of this series, it’s easy to believe that this is the outlook of the show: change is possible if we listen to the youths rising up with a better toolkit to affect it than we ever had.

But The Politician also exploits characters (a particularly jarring moment is a character of color suggesting the assassination of Payton, threatening to sour any goodwill they’ve instilled in the audience for no reason) or throws privilege in our faces (Paltrow’s Georgina gets in a zinger about buying two of her sons’ ways in Harvard, a particularly ill-timed line). If you’re going to tell us something about how the next generation is going to change the world — and I believe somewhere underneath The Politician‘s eccentricities it is trying to say that — it’s not enough to just present us with an intersectional core cast that offers relatable characters of various races, genders, socioeconomic backgrounds, and so forth. You actually have to give them some meaningful space and screen time to let them talk; otherwise, it’s just exploitative.

Early in the premiere episode, one character says, “I don’t want you to appear authentic. I want you to be authentic.” It sums up perfectly what I find most frustrating about this pretty but hollow series. I see the good intentions and the vision underneath all of the Murphyisms and grandstanding. I see a lot of half-baked ideas about politics as a means of change, about the harmful dividing lines of class and privilege that separate potential allies, about the importance of the caring and keeping of your mental health, and so much more. But at every turn, The Politician chooses an artificial, inauthentic way of expressing these ideas, of prioritizing the drama for the truth, and opting in for skating by with little else to offer but something superficially indulgent to lose yourself in for a while.