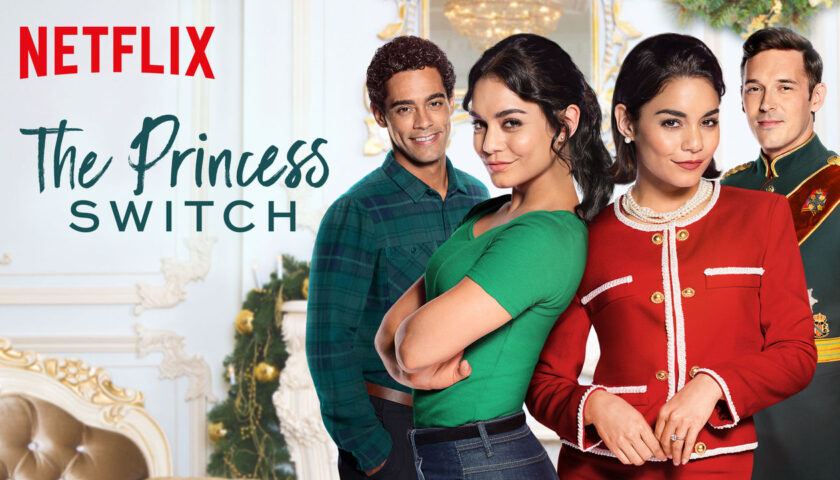 The movie is exactly what the trailer showed us. Stacy (Vanessa Hudgens) and Prince Edward (Sam Palladio) are happily married. Duchess Margaret (Vanessa) and Kevin (Nick Sagar) have broken up. Margaret is all set to be a Queen of Montenaro. However, she isn’t quite happy. The two decide to switch places again to Margaret can spend time with Kevin and sort of the differences. However, her cousin Fiona (Vanessa) enters the picture. As Fiona also looks like Stacy and Margaret, how will the two achieve what they have to with this triple mess?

Writers Robin Bernheim and Megan Metzger write another predictable yet lovely story. That’s the thing about these sweet rom-coms. You know how it’s going to end. Yet, you enjoy them. However, this isn’t as SWEET as the first part. There are a few emotional scenes that balance out the mood of the film. But having three Vanessa Hudgens isn’t quite easy to pull off, especially when the latest addition makes you cringe at times.

Stacy and Margaret are wonderful characters and Fiona is exactly the opposite of what they are. The third addition of Vanessa’s character sometimes seems unnecessary and forced like Fiona in the palace. However, there are a few funny scenes with our new entrant.

The first part was all about Stacy finding her Prince charming and she found a real one. The sequel is about a Duchess finding her knight in shining armour and well, she does!

Vanessa Hudgens is gorgeous in every frame. She swiftly switches from Duchess Margaret to Stacy. It’s only her who has the most screen space, sometimes in duality or more. Even if it’s an easy-breezy movie, it is challenging. Despite having a few funny scenes, Fiona is her weakest performance in the sequel. Her chemistry with both Nick Sagar and Sam Palladio is endearing on screen.

Michael Rohl has kept the essence of a fairytale romance and Christmas intact in the sequel too. He could’ve given us more of Stacy and Prince Edward’s romantic scenes though. I really think the makers should’ve avoided the revelation of the third girl who looks like Stacy and Margaret. It has taken away all the curiosity while watching the film. Kelly Clarkson’s ‘Underneath The Tree’ is stuck in my head. Lovely use of that song among others.

Overall, it’s an early little Christmas present for everyone. A triple dose of Vanessa Hudgens too much, yet entertaining. If you are craving a feel-good festive movie for the weekend, this one should be on your list.