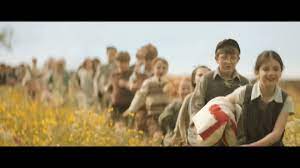 Jenny Agutter became a British cinema hall-of-famer as Roberta, or Bobbie, in the much-loved 1970 family classic The Railway Children, about three children forced by circumstance to move with their mother to a cottage in Yorkshire and have adventures involving steam trains. She returned to play the mum in a 2000 TV movie version, and now Agutter is back as her original character, 40 years older, in this sparky sequel imagining a new generation of railway children in 1944, a reboot devised and co-written by producer Jemma Rodgers and directed by Morgan Matthews.

Maybe it’s a bit self-conscious in the way it revives and reimagines the classic plot points, and there could be historical authenticity issues. Would US army military police really have been allowed to arrest an underage British civilian and transport her across country in handcuffs? But there’s a fair bit of fun, channelling bygone classics such as Hue and Cry and Whistle Down the Wind.

Three evacuee kids from wartime Manchester, Lily (Beau Gadsdon), Pattie (Eden Hamilton) and Ted (Zac Cudby) fetch up in exactly the same village where Roberta has apparently stayed on and is now a kindly grandmother: her daughter (Sheridan Smith) is the headteacher of the local school and has a slightly Just-William-ish son called Thomas (Austin Haynes), whose dad is away in the RAF fighting the Germans. Railway Children fans may be forgiven for wondering if any more legacy characters from the original film are going to be revived, or if we will find out if Bobbie really did marry Jim, grandson of the “Old Gentleman” in the first tale, as seemed likely. Well, suffice it to say we discover that Bobbie became a convinced suffragette as a young woman and, on those grounds, comes very close to the blasphemy of disagreeing with Winston Churchill. Now it appears the family apparently have a kindly old uncle, or great-uncle, played by Tom Courtenay, who is something hush-hush in the War Office.

Lily, Pattie and Ted roam around the place with their new friend Thomas, getting involved in scrapes with the local kids who resent them, and they get to know the peppery stationmaster Richard, played by John Bradley. But the grownups are aware of tension with the American military police who have a racist attitude to the African American GIs who are popular in the village. This adult problem becomes a reality in the children’s lives when they find a wounded, shivering black American soldier hiding in one of the railway engines in a siding; this is Abe (Kenneth Aikens), who sternly tells them he is on a secret mission and they must not on any account tell anyone that he is there. Earnestly, the four children fetch him food and supplies and agree to hide him in their house.

This is a film with a touch more savvy about the real world than its 1970 forebear, at least partly because it has child actors who are the same age as their characters. The now legendary scene from the first film in which Bobbie sees her daddy through the steam on the railway platform – a scene which has become more iconic than its creators ever quite envisaged – is echoed and doubled in a new dream that Lily has, in a much more serious context. And there are more shenanigans involving holding up signs to a passing train and getting it to stop. It’s an amiable and ingenious tribute to the innocent, good-natured spirit of the original.