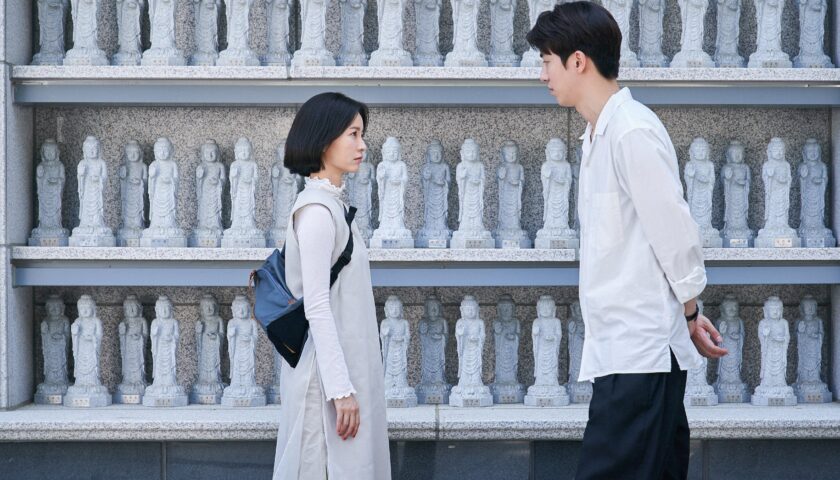 Roughly two weeks ahead of its premiere, The School Nurse Files has revealed a sneak peek at Jung Yu-mi and Nam Joo-hyuk’s colorful quests in the upcoming Netflix Korean original series.

The School Nurse Files follows the peculiar life of Ahn Eun-young (Jung Yu-mi, Live), a newly hired school nurse who has the extraordinary ability to see blobs of undiscovered particles called “jellies” that sprung forth from human desires. As she is the only one who can see the creatures, she is also the only person who can fight them. Fortunately, she discovers that Hong In-pyo (Nam Joo-hyuk, The Light in Your Eyes), a Chinese language teacher at the school, has a special energy that can recharge her. With his newly discovered skill, Teacher Hong decides to help Nurse Ahn in protecting the students from monstrous and evil jellies.

The main trailer for the series opens with Ahn Eun-young’s remark about her strange world and how it ultimately led her to who she is today, “One that allowed me to see a special world of my own. I’m Ahn Eun-young, the school nurse.” The scene then shifts to what seems like a regular consultation between her and a male student but when she asks him, “What’s bothering you?,” weeds start growing out of his head. As if she already expected it to happen, she casually takes out her magical toy sword and eradicates the weeds with a single slash.

The succeeding scenes show Hong In-pyo’s initial encounter with Nurse Ahn, where he observes her weird actions. When they finally meet, she stares at him in awe and could not help but voice out, “You have a particular aura about you,” referring to the rainbow-tinged jelly that envelops Teacher Hong.

Revealing how the school turned from a place of learning into one that is plagued with evil jellies, the video fast-tracks to the moment when Nurse Ahn found the school basement, a secret lair that houses huge and freaky-looking jellies. In an emotional statement about her gift, she declares, “I was destined at birth to help others in secret.” At the same time, students who appear to be possessed by unknown entities are shown running frantically towards the school’s rooftop. Determined to save the students from what is controlling them, Nurse Ahn rushes to their aid with her handy toy weapon of jelly destruction.

As the caption “A dangerous and beautiful world” flashes, Nurse Ahn and Teacher Hong’s interlocked hands come to the frame. Then, the latter says, “Does that really help you recharge your aura?” She responds by suddenly widening her eyes as a way of telling him that it does fill her up with energy. Hinting that a strong bond between them blossomed after that, the two joke on about how they are similar in many ways.

The visually explosive video then closes with a revelation of what Nurse Ahn fears the most as she utters worriedly, “If I make a mistake or fail…” Centering on a woman whose normal life is anything but normal, the drama’s tagline lights up on the screen, “Fight monsters. Save the school. Go to lunch.”

The School Nurse Files is adapted from the internationally acclaimed novel “School Nurse Ahn Eun-young” by Chung Se-rang, who is also penning the script for the series. Meanwhile, Lee Kyoung-mi of the films Crush and Blush (2008) and The Truth Beneath (2016) is marking her first work as a drama director in the project. The six-episode fantasy series is slated to stream exclusively on the platform beginning September 25.