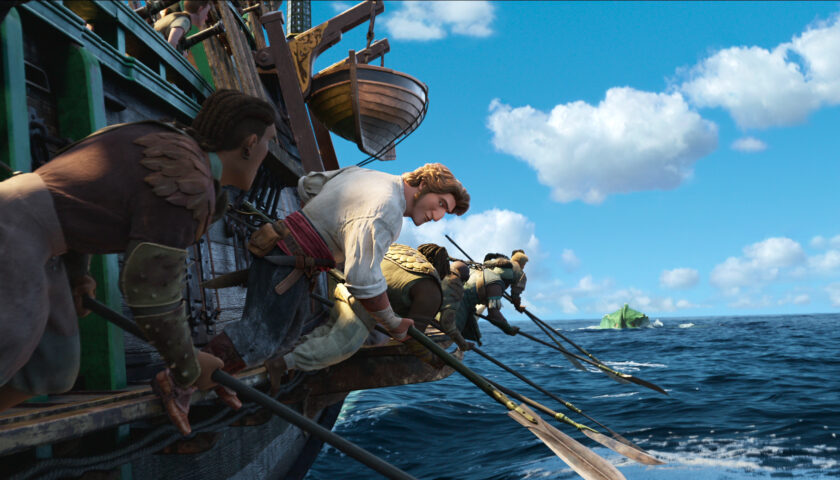 Set in a world of fantastic Sea Beasts, orphan Maisie Brumble (Zaris-Angel Hator) grows up admiring the heroic exploits of monster hunters in various books with no ship of monster hunters more revered than Captain Augustus Crow (Jared Harris) of the ship The Inevitable who is respected by his crew especially Jacob Holland whom Crow rescued as a boy and views as an adopted son. Following the Inevitable’s successful hunt of a sea beast, the King (Jim Carter) and Queen (Doon Mackichan) of the empire they serve are displeased with Crow for having abandoned pursuit of sea beast, The Red Bluster, in order to rescue fellow monster hunters from another sea beast. Declaring the age of hunters over and assigning Admiral Hornagold (Dan Stevens) the task of bringing down Red Bluster with the royal frigate The Imperator, Crow and his crew soon setout in a race to bring down Red Bluster to prove the age of hunters is still alive. Maisie stows away having lost her monster hunter parents on board the ship The Monarch, and Crow allows her to stay despite Jacob’s objections but eventually Maisie and Jacob discover the true nature of the sea beasts isn’t aligned with what they’ve been told.

The Sea Beast is the latest animated film from Netflix and fourth directorial effort from Chris Williams following his work on Bolt, Big Hero 6, and co-directing Moana. Williams directs from a story he co-wrote with Nell Benjamin and the film in many ways feels like a spiritual successor to Williams’ Moana with the seafaring setting and emphasis on adventure/exploration making them feel like cinematic cousins. While Williams does revisit familiar territory, he does so in a rousing fashion that harkens back to classic swashbucklers and seafaring stories that results in a great animated adventure.

What really stood out to me with The Sea Beast was the dedication to creating what looks and feels like a livable and believable world. Too often these days a lot of fantasy films, especially animated ones, will feel the need to insert more contemporaneous dialogue into the film rather than tailoring the words for the world. Many recent Disney films have had this issue for me such as Raya and the Last Dragon where there were multiple utterances of the phrase “Dragon Nerd” that felt way too contemporary for the setting presented. The Sea Beast does a nice job of sidestepping that trope and I was appreciative of how the screenwriters avoided contemporary terminology or slang (with the exception of a very subtle nod to Xenomorphs of all things in a dialogue exchange, didn’t see that coming) and the actors felt like they were inhabiting written roles rather than presenting themselves as is.

The characters are all nicely rounded with Karl Urban playing dashing hero Jacob Holland whose appearance harkens back to swashbucklers like Errol Flynn’s Captain Blood in movement and design and despite possessing an edge, the movie gives him a lot of humanity and vulnerability with some great scenes between him and Jared Harris’ Captain Crow. Jared Harris is also quite good as Captain Crow and there’s definitely more than a little bit of Captain Ahab in the character as he carries a deep seated grudge against Red Bluster but like Jacob the character also gets some solid moments of humanity which adds to the sadness and rage that motivates his character. Zaris-Angel Hator does well in her first starring role having previously only done supporting work in series such as Black Earth Rising and she does a solid job of bringing enthusiasm and joy to this character which is also counterbalanced by uncertainty that leads her to question everything she’s learned about the sea beasts, it’s a really solid performance from Hator and I look forward to seeing more of her in the future.

The story is made from familiar parts but it does a good job of refining and remixing the elements to put its own stamp on it. The plot involving a multigeneration feud between the world of man and the world of mystical beasts will undeniably invite comparisons to something like How to Train your Dragon, but the movie does a solid job of making this story about the cost of hatred based on lies and in the age of disinformation that’s a valuable lesson to not just children but adults about questioning the source of those want you to be afraid of something. The way Jacob and Maisie go through this world coming across the various wonders leads itself to many breathtaking moments that left me with a sense of genuine awe.

The animation is great with solid character and creature designs as well as exquisitely detailed rendering in the environment. Despite Chris Williams’ Moana already making the water and sand effects look pretty impressive, Williams somehow manages to even up that as from the first shot where we see young Jacob adrift on a violent sea with burning ship wreckage in the background, the visuals are not only technically impressive but really pop with key moments that emphasize the scale of the sea beasts or the lush nature of the environments.

If I were to criticize The Sea Beast, I would say it’s first act is maybe a bit longer than it needed to be. The movie commits a lot of time to its worldbuilding with where the beasts are, how they’re tracked, and the culture of monster hunting, but then there’s other parts of the story that feel extraneous such as Dan Stevens’ very brief turn as Admiral Hornagold who’s positioned early on as being a competitor to Captain Crow for Red Bluster, but after his introduction he disappears for most of the movie and when he does come back he’s so inconsequential you think “why did this character need to be here?”. Dan Stevens is a terrific actor and always welcome, but he does so little in the role it seems like a bit of a waste to even have him here. There’s also some odd underdevelopments in other areas such as a bargain Captain Crow makes with a shady character or the King and Queen who become more important in the third act aren’t given names, but these are minor nitpicks in the grand scheme of things.

The Sea Beast is a solid animated adventure from Netflix and continues Chris Williams’ impressive resume as a director. While the story hits familiar beats, it has a remarkable dedication to building a world and sticking by that world without feeling the need to undermine itself with self-aware humor or purposeful anachronisms or contemporary dialogue. Some plot points feel a little extraneous or could’ve used some fine tuning, but it’s a solidly entertaining adventure I can highly recommend.