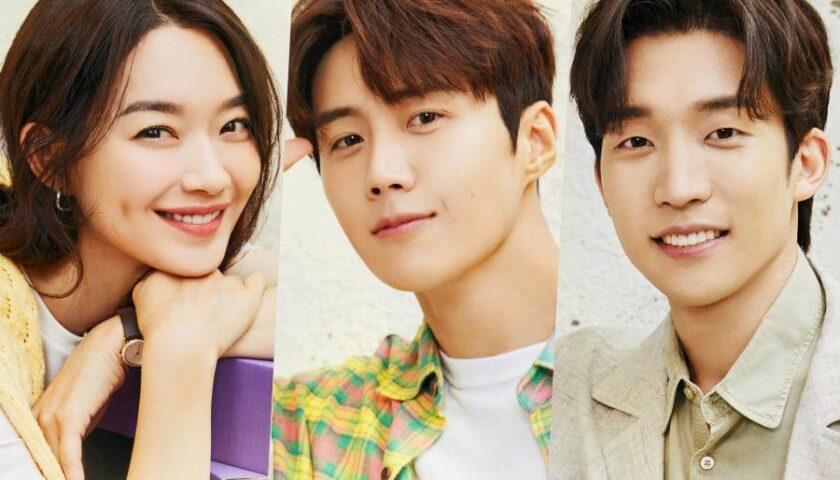 Hye-jin, however, is a doctor and works at a dental clinic. Turns out, her first patient is her nosy neighbour whom she had lied to about where she worked. Anyway, the interaction goes fine and Kim Yeon-ok goes home happy. However, the chief doctor instructs Hye-jin to make the procedure costlier, as in, take out all of her teeth and fill them in. She disagrees and reminds her that Yeon-ok is her patient and she will diagnose her as she sees fit.

However, Hye-jin later learns that the chief doctor has taken away Yeon-ok from her hands. Hye-jin is furious and goes off to meet the chief in Hometown Cha Cha Cha episode 1. When the latter asks her what she’s thinking, Hye-jin gives her a piece of her mind and quits then and there. Later, at night, she meets a friend and they talk about how she can’t afford to own her own practice and that she will have to work under someone again – as in, find work.

The next day in Hometown Cha Cha Cha episode 1, Hye-jin wakes up from a drunken stupor to find that she had posted a nasty message on a forum against her previous boss and 6,982,700 won will be withdrawn on March 20 (unsure where. Is it rest? Did she buy the shoes?) Anyway, we then see her a few days later. She is unable to get a job because anywhere she applies, they reject her due to her previous shortcomings. And yes, she did buy the shoes.

We then meet our other protagonist of Hometown Cha Cha Cha episode 1, who seems to be having a great time on a boat. Du-sik is a sailor on a fishing boat and seems to enjoy his work a lot. He’s the typical nice person – everyone likes him, he’s friendly and helpful with everyone, something that we are made aware of from the first minute.

Hye-jin goes to her hometown to meet her parents for her mother’s birthday. As she sits on the beach, she thinks back to her memories from the beach with her parents. However, taking a leisurely stroll on the beach has its demerits and soon she realises that her costly shoes aren’t there on the beach where she left them. It is here in Hometown Cha Cha Cha episode 1 that she meets Du-sik. Yes, he has the shoes, well, shoe.

When she asks him whether he’d help her find her other shoe, he refuses and is rather rude about it. Anyway, he gives her his sandals to wear, which she isn’t happy about but it’s better than walking barefoot. Anyway, on her way to her car, she meets two kids, one of whom lost his tooth. She helps him and takes him to his parents who, incidentally, own Hwajeong Raw Fish Restaurant; the slippers are from here.

This is when she meets Hwa-jung, who offers her food for helping her son. At first, she refuses, but then gives up and decides to eat seaweed soup. Hwa-jung continues talking to her and asks her to visit Gongjin more often. She also says that they really need a dental clinic nearby since the nearest one is 30 minutes away by car. Thus, if she’s thinking of working here, then Hwa-jung might just be able to help her.

She really considers renting a place here, however, she calls herself ridiculous for even thinking it. As she reaches her car, unfortunately, it doesn’t start. Trying to call the insurance company, she realises that her phone doesn’t have a signal. Trying to find one, she realises she needs to use the restroom! It’s all a mess for her in Hometown Cha Cha Cha episode 1 for Hye-jin!

She goes into the café and uses the bathroom. Unfortunately, the phone there also doesn’t work and neither does the card machine. Oh, the ATM machine isn’t working either. I am unsure what this means. As she is being haggled by the café people, in comes Du-sik who tells them that all connections are down because there was a fire at Hanguk Telecom.

She begs Du-sik to help her but he asks her to earn the money. I just feel bad for Hye-jin. The poor girl isn’t able to pay back the money to the café for no fault of hers but everyone is acting like she’s a thief for some reason. Why would anyone want to stay here when they treat their guests? Anyway, for making her make the money, he walks around with him as he tells people about the fire.

Hye-jin is, obviously, taken by his kindness in Hometown Cha Cha Cha episode 1. Anyway, he leaves her at the docks to slice open squids. I am shocked at how insensitive people are. Like, these people don’t know her, but now she’s just sitting there opening squids apart and everyone just badmouths her for not doing a perfect job regarding something that she’s not supposed to do. I hate how much they look down on Hye-jin.

The annoying part here is that comedy music plays in the back like it’s some big joke? I would be terrified if something like Hometown Cha Cha Cha episode 1 happened to me – unable to contact anyone, without any money or without having anyone known to you. Anyway, after she gets her wage for the day, Du-sik implies that she isn’t a hard worker? Which is ridiculous to me because… he doesn’t know her???

Anyway, Du-sik helps her with her car, but unfortunately, she won’t be able to drive it that day. Which means that she has to stay back there. At a sauna, Hye-jin meets Du-sik again and later gets scared of a cricket and runs away to the terrace.

The next day she meets Du-sik at the harbour to ask about an auto-repair shop in Hometown Cha Cha Cha episode 1. However, she is completely unaware that her phone is working now. She gets her car fixed and Kim Yeon-ok calls her to let her know how grateful she is for her help. The kids, too, thank her for her kindness. After a very bullied day yesterday, things finally seem to look up to her.

In her car on her way back to Seoul in Hometown Cha Cha Cha episode 1, she gets a call from ex-Chief Doctor who tells her that her post is the reason why no one wants to hire her. The dental community is very close-knit and no one will hire a whistleblower. That being said, she offers her a compromise – she will take her back only if Hye-jin gets on her knees and begs. Of course, she doesn’t take this well, calls her a quack and goes back to Gongjin to start her own practice.

She immediately goes to talk to Hwa-jung, who agrees to take him to the realtor who turns out to be Du-sik. The coincidences are strong with this Hometown Cha Cha Cha. Anyway, the last sequence is from Du-sik’s perspective, where we see how he saw Hye-jin throughout the day and there are definitely some heart eyes there. I am still annoyed at his bullying though, so we’ll see in the next episodes!

Hometown Cha Cha Cha episode 1 might just be a bit much for me, however, I was mesmerised by the Gongjik locales and the beautiful and pristine cinematography. The series promises much growth for our flawed protagonists, so I don’t want to write anyone off just yet!

Hometown Cha-Cha-Cha is streaming on Netflix.