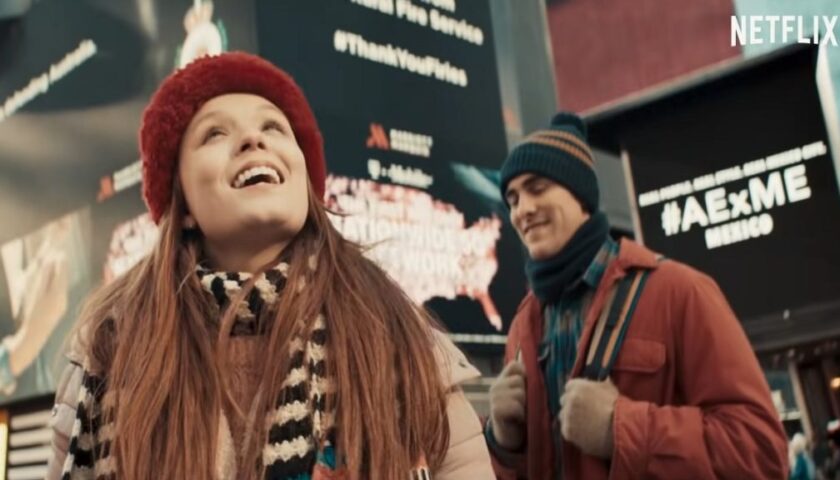 Barbara (Larissa Manoela) dreams of traveling the world; she knows everything there is to know about cities like Paris and New York, but her job selling magazine subscriptions at the airport is hardly enough to get her out of Brazil. She tries hard to sell enough subscriptions to win an all-expense paid trip, but when she comes up one subscription short of victory, she quits her job and ends up working the taxi stand in the airport with her best friend Taila (Thati Lopes). Barbara gets her hopes up about going to the United States after she hits it off with an American flight attendant named Brad (David Sherod) and soon finds things are not as simple as she hoped. After a lightbulb moment, however, Barbara realizes there is a way to get to America: an exchange program. Barbara and Taila are soon on a plane and placed with families, where they see snow (and more than a few other things) for the first time.

The girls settle into their respective new homes – Barbara caring for a baby, Taila staying with the parents of a missing woman to keep them company – but things aren’t quite as glamorous as they pictured. While Barbara wants to drop her English course and study to be a flight attendant instead, her boss isn’t too keen on the idea, and Taila is made over to look like her new family’s missing daughter. Barbara and Taila end up in a love square of sorts, allowing the new men in their lives to get between them. This exchange program may very well end up changing more than this duo ever bargained for.

I thought I knew what I was in for with The Secret Diary of An Exchange Student. Girls itching to see the world head to America and get into shenanigans, learn the true meaning of friendship and figure out their lives’ paths. Simple enough, right? That is not what The Secret Diary of An Exchange Student is. This is a movie so tonally inconsistent and bizarre I found myself scratching my head on more than one occasion, wondering if I’d entered some sort of fever dream where logic and reason were thrown out the window.

The first half of the film is fun, if a little rushed; seeing Barbara hustle to sell subscriptions and Taila work the taxi stand is totally entertaining, and we get to witness their friendship in action. Even after Brad arrives, it still feels like the girls are thick as thieves – until they arrive in America, where the film seems to forget that Barbara and Taila are “sisters”. That said, the fish-out-of-water sequences are delightful too, particularly Taila poking fun at her strange new family in Portuguese as they stare on with dazed smiles. These threads are lost quickly, however, when The Secret Diary of An Exchange Student (a title that is making less and less sense as I think about it more) tries to throw in twists and turns that have no place in a movie like this. Basement waterboarding? NSA business? Paternity questions? Green card marriages? None of it clicks with the rest of the story whatsoever. It feels like the writers played a round of bizarro script Mad Libs, and the result is… truly baffling. I have no idea how anything past the 45-minute mark made it past a director or studio head. The mind reels.