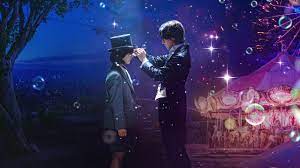 “Do you believe in magic?” Ri-eul (Ji Chang-wook) asks in his opening scene for The Sound of Magic. As if casting a spell, the sentence is reiterated in every single episode, making a rather poignant point. Using ‘magic’ as a metaphor to escape the harsh reality, director Kim Sung-youn explores the innocence of a child who feels trapped and burdened by society. The Sound of Magic is not so much about the ‘magic’ but the sound of it, the feeling of it that can provide comfort at a time when you feel ‘invisible’.

Burdened by the circumstances at home, Ah Yi doesn’t have any dreams and has lost her childhood wonders. All she wants is money for her problems to go away. As she silently cries out for help, she meets a mysterious magician, Ri-eul, who has turned an abandoned amusement park home. In a ‘magical’ irony of sorts, Ah-yi ends up befriending Ri-eul, who is considered a crazy man. A girl who doesn’t believe in magic ends up trusting a supposed ‘magician’. As their bond thickens, we have Il-Deung (Hwang In-youp), who is a top student with a rich family background. But, as they say, money cannot buy happiness.

Their paths collide as they identify similarities with each other. What is a common factor between all the three important characters? None of them fit society’s standards.

While the intention of the story is interesting and honest, it lacks the emotional gravity needed. The first four episodes leave you with no major exciting moments, although the last two episodes make up for it. However, for a show which is only six episodes long, a better screenplay could have helped keep the show engaging.

Director Kim has used music and choreography as a medium to communicate the inner turmoil and dilemma of each character. It is refreshing to see that in a K-drama, although it is not a completely new phenomenon for Indian cinema lovers. The inconsistency in the use of music and dance throughout the episodes was apparent and did not work in favour of the show.

However, a huge shoutout to the cinematography team for the beautiful visuals captured and created as part of the VFX. It gave the show an edge over everything else.

Ji Chang-wook is known for his versatility. He can easily pull off a boyish grin and turn us into an emotional mess within seconds. As Ri-eul, he does exactly that. If not for his easy smile and convincing performance, The Sound of Magic wouldn’t have been a breeze to watch. The mysterious aura around him and the vulnerability shown in parts is something that keeps the show interesting, although, at some point, the anti-climax seems predictable. The strength of the show lies in its performances, rather than the story itself.

Choi Sung-eun as Ah-yi is such a delight to watch. She evokes empathy and compassion as a teenager not wanting to grow up. It is such an impressionable moment in the show when you finally see her embracing the ‘magic’ around and believe in dreaming. There is a very wholesome arc to her character.

Hwang In-youp as II-Deung adds a bit of his personal charm and vulnerability. However, his character arc felt half-baked. There was so much more they could have done with his character. Also, his onscreen romance plot is certainly jinxed.

The music of the show is beautiful and soothing and goes well with the emotional tangent. But there is nothing that stays with you till the end.`