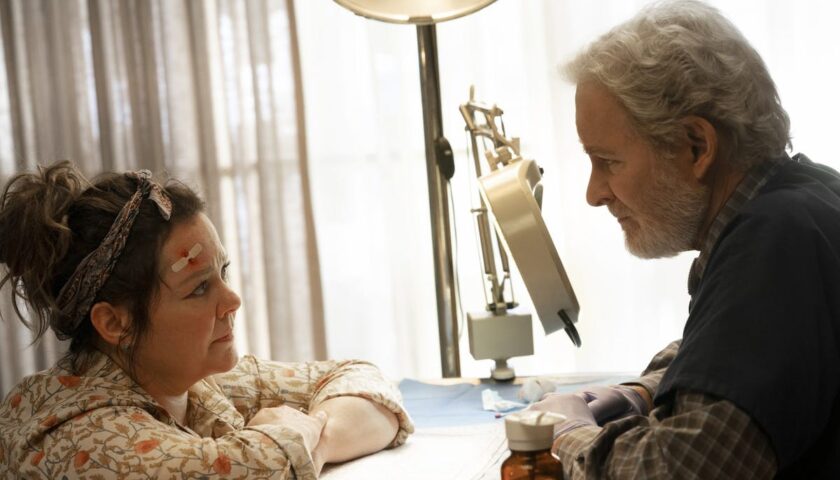 Melissa McCarthy and Chris O’Dowd, two of the most endearing actors onscreen, play Lilly and Jack, a married couple happily painting a mural for their infant daughter’s room, as The Starling begins. Cue the opening credits, and we find them a year later, grappling with the unimaginable worst after having lost their baby to sudden infant death syndrome. Lilly is stoically putting one foot in front of the other, which includes visiting Jack at the psychiatric hospital where he is being treated. A project starring these two plus Kevin Kline, directed by Theodore Melfi, of Hidden Figures — what could possibly go wrong? Whoa. A lot.

With a predictable trajectory and cringeworthy metaphors, The Starling is so slushily sentimental it makes the typical tearjerker look like a noir. Despite the lived-in performances from its three high-profile stars, this attempt at heartfelt drama is hopelessly by-the-numbers.

References to the Three Stooges: one. Lilly, exhausted from her job at a grocery store and her long drives to see Jack, is not dealing with her own grief. When one of Jack’s therapists refers her to a doctor, Lilly hears his name and says, “Larry Fine? Like the Three Stooges?” Yes, and thanks to McCarthy’s deftness, the line provides the one laugh in a film whose other attempts to lighten the tone are so leaden they include one of Jack’s fellow patients (Loretta Devine) creating a poop emoji in pottery class. Larry (Kline) turns out to be a former therapist for humans but now a veterinarian, who nonetheless befriends Lilly. Irascible at first, he of course turns out to be a softy at heart.

Number of extended, heavy-handed metaphors: two, and they are both cliches. The starling of the title is a bird that keeps dive-bombing Lilly and hitting her in the head as she works on the neglected vegetable garden in her large yard. The bird won’t stay away, and eventually builds a nest, in case anyone might miss the fact that the bird is like Lilly and this is a story about life after grief. No need to even wonder if that metaphorical garden will grow.

Number of montages shown while we hear pop songs: a whopping five. One montage shows Lilly in the garden working, another clearing the baby furniture out of her daughter’s room. Two songs are by Brandi Carlile, and they are all pleasant enough, but the overload of the technique comes close to making this a grief musical. Apart from the montages, Benjamin Wallfisch’s score features tinkling, saccharine melodies while Lilly is looking at the empty crib and soaring music when the starling, yes, soars.

McCarthy, who can be fantastic (The Heat, Can You Ever Forgive Me?) has often been much better than her material (Life of the Party, Superintelligence, Thunder Force). Once more she proves she can do everything except save a hackneyed script. Unlike many comic actors who overdo the drama, she makes a simple glance or change of expression revealing.

Kline and O’Dowd join her in deserving so much better than this. Lilly and Larry’s scenes are effortlessly played even when the dialogue is horrible. “You won’t be able to scare him away too easily,” Larry says about the tenacious, Lilly-like starling. O’Dowd is one of the most natural actors around, and he is at times heartbreaking here, unable to say his daughter’s name without being overtaken by anger, but his scenes are all too brief. All three characters follow a trajectory so obvious and trite that it prevents any real emotional connection to them or to the story’s deeply serious premise.

Melfi obviously knows how to construct a polished movie, visually bright and crisp, and especially how to cast it. Daveed Diggs as a hospital attendant and Timothy Olyphant as Lilly’s unsympathetic boss are wasted in tiny roles. But The Starling shares the easy sentimentality of Melfi’s St. Vincent, (starring McCarthy and Bill Murray, with O’Dowd in a small role) rather than the bracing freshness of Hidden Figures. Melfi wrote those two films, but this screenplay is by Matt Harris. It was on the Black List in 2005 and somehow became this misfire.