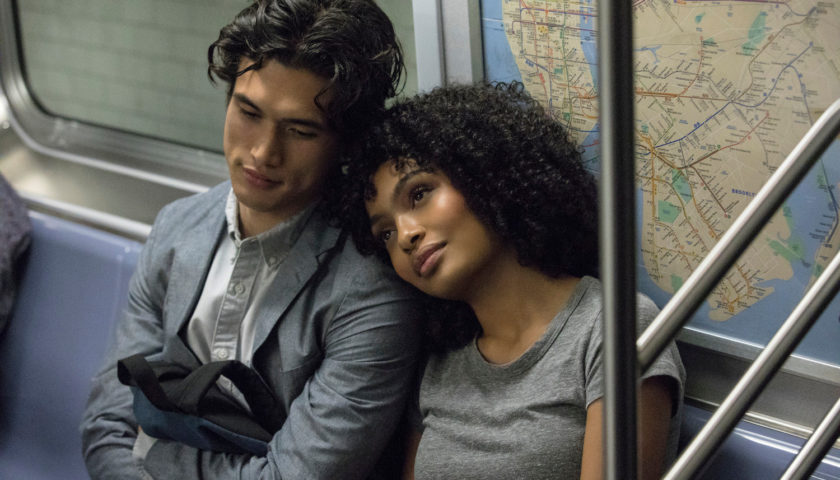 Review: Ask Natasha Kingston (Yara Shahidi) who she adores, and she’ll answer astronomer Carl Sagan, whose presence hovers like Cupid over Ry Russo-Young’s winsome and intelligent teen romance “The Sun Is Also a Star,” based on the bestselling YA novel by Nicola Yoon. (The production team also adapted Yoon’s “Everything, Everything” into a 2017 weepie.) Like Sagan, Natasha is rational and trusts only in the scientific method. Love, she insists, is “legit dead-ass not real” — or at least, it’s not provable — until Natasha cosmically collides with moony high schooler Daniel Bae (Charles Melton) when her baseball jacket embroidered “Deus Ex Machina” catches the would-be poet’s attention.

Alas, tomorrow, INS is scheduled to deport Natasha, an undocumented Jamaican. Between appointments with her immigration lawyer (John Leguizamo), the strangers have one day to wander the city debating their destiny, during which Daniel takes his cues from the New York Times’ viral 2015 Modern Love column “To Fall in Love With Anyone, Do This.”

Convincing? Not entirely. The pair’s polarized stances of love versus logic are the CliffsNotes of a personality clash. Yet, the slacker enchantment of Richard Linklater’s “Before” trilogy transplants just fine to Generation Z’s Manhattan, with its selfies and laser-lit noraebang parlors. And Russo-Young (“Before I Fall”) woos the audience into falling for her leads, two genetically blessed TV actors graduating to the big screen. (Shahidi stars on “Grown-ish”; Melton on “Riverdale.”) The camera lavishes the couple with closeups, sometimes interrupting their conversation just to stare at their faces in neon tints, or to fill the screen with a grid of Shahidis.

The expressive and observant Shahidi does the bulk of the acting, and never lets Natasha become too much of a drone. Melton, who’s prone to preening, is introduced abs-first with the awe usually reserved for car commercials. He doesn’t mind making a joke of his good looks by unbuttoning his shirt before crooning “Crimson and Clover.” (The stellar soundtrack is otherwise all dreamy pop from around the globe.) As he sings, Russo-Young whirls into a fantasy of Natasha and Daniel’s own future from wedding to baby, which is so idealized and loony it feels like it could only come from two overwhelmed kids.

When “The Sun Is Also a Star” manages to pan away from the couple’s pillow lips, the film swoons over New York, as cinematographer Autumn Durald spins in circles in the middle of Grand Central Station and editor Joe Landauer assembles montages of neighborhoods from Harlem to Chinatown to Greenwich Village to Queens as though Natasha fears she’s seeing them for the last time. There’s a sense that all the extras could be the star of their own romance if the camera chose to follow them instead, a big-heartedness that extends to the silent faces at the Immigration office hoping for a miracle.

Tracy Oliver’s script alludes to “the current political climate,” and the couple has clear-eyed chats about race. Yet while the film’s credits list both Korean and Jamaican cultural experts, “The Sun Is Also a Star” is interested in cultural identity only as much as it matters to the couple. To them, ethnicity is tangential — something that’s shaped who they are as individuals, but that barely registers in the conversation of who they might be together. That said, there is a playful sequence where Daniel sprints through the history of how the majority of the black hair-care shops in America came to be owned by Korean families like his.

Natasha’s more concerned that Daniel wants to be a starving artist. What’s the sense of being broke? Especially when his family, immigrants themselves, have prepared him to become a doctor ever since his doljabi, a ceremony in which Korean toddlers pick their future careers. In a flashback, we see the fateful moment one-year-old Daniel grabbed a stethoscope. But Russo-Young also notes the pride on his father’s (Keong Sim) face that his son won’t be stuck stocking hair dye. That joy inoculates his parents from becoming the movie’s villains. Daniel’s screw-up older brother Charlie (Jake Choi) is more gleefully cruel. Still, the script has empathy for him, too, after we silently observe how their mom (Cathy Shim) sets Daniel out an elaborate traditional breakfast, while the resentful Charlie forages for corn chips.

“The Sun Is Also a Star” can feel naïve for choosing optimism over anger. The film believes we can all just get along, as long as people are seen as people, not case files locked up in a government file cabinet. (When Natasha’s first case worker puts a rubber-band around her family’s papers, a light goes out of her eyes.) Yet, Russo-Young, who started her career as a mumblecore director and actress alongside Greta Gerwig, is aware this might be the right time to urge the country to believe in love, too. Sure, Sagan’s scientific method dominates the universe. But here on earth, this crowd-pleaser convinces us to spend one day savoring an American Dream.