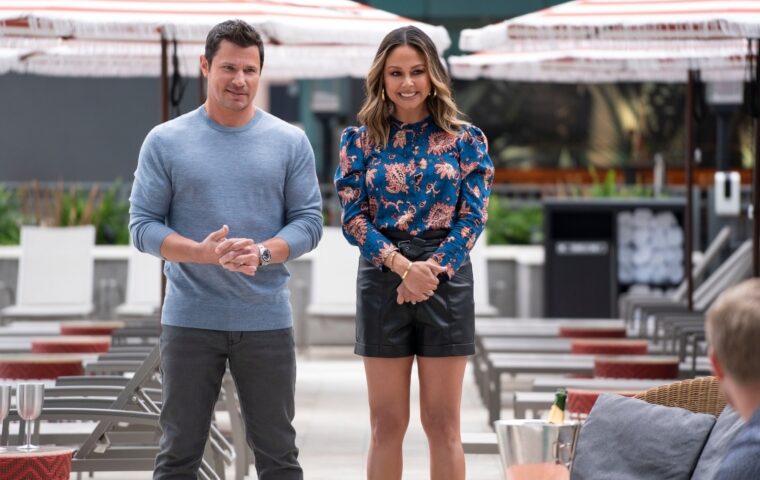 The last programme presented by married couple Nick and Vanessa Lachey (fixtures in the reality TV firmament for the last 10-15 years, for reasons that need not concern us now, or possibly ever) was Love Is Blind. This was (indeed continues to be, until at least 2024, as a fourth and fifth seasons have just been commissioned) a show in which strangers communicate from single “pods” without being able to see each other until various pairs profess themselves in love, become engaged, then meet and get to know one another for a month before actually-factually getting married. I remember the inaugural season vividly. I described it as “absurd, revolting, endearing, toxic and wholesome by turns – and addictive as hell throughout … Crack-meth.” I also wondered whether it would be possible to exploit emotional frailties, profane the scared, make the private and precious public and worthless and turn it into voyeuristic ratings bait any more ruthlessly or efficiently.

Well, bless my little rhetorical socks – we now have an answer! The answer is “Yes, absolutely”, and it is delivered in the form of The Ultimatum: Marry or Move On. In this 10-part bin fire, the Lacheys introduce us to what is claimed to be six couples, but by my instantly anxious and fevered count, number at least 302, who have in common the fact that one of each pair wants the other to put a ring on it or else call a halt to their relationship. Shit or Get Off the Pot would have been a better title, but, alas, the US still clings in the strangest ways to its Puritan past, so to marry or move on is the decorous choice presented.

I cannot possibly be expected to remember 604 – or indeed 12 – contestant names at my time of life, especially when they are all entirely interchangeable, so, instead, I have labelled them blonks 1-6A/B (the men) and blermps 1-6A/B (the women. Homosexuality has not yet entered the Lacheyean universe, although they have promised a second season with an LGBT cast). “A” denotes blondness, “B” denotes not-blondness and that is literally everything covered that matters in this show.

To be fair, a couple of the blonks do stand out (Jake for being nine parts puppy and apparently as nice a guy as reality TV has ever unearthed; Colby for being the only male ultimatum-giver and for having Garth Brooks vibes even before he puts on a Stetson in the final episode). One or two of the blermps are also notable: Alexis is a flint-eyed, lantern-jawed blond who wants a ring in return for the cooking, cleaning and laundry she does for her live-in blonk (“Marriage is a financial and emotional transaction”), and April is a quick, funny, genuine charmer of 23 who should no more be wanting to get married than … any quick, funny, charming 23-year-old should.

Anyway. The couples are split up and encouraged to lounge round a pool, have dinner, drink cocktails and see if they “spark” with anyone else. Then they choose a new partner to live with for three weeks before returning to their beloved, and deciding whether to shit or – I mean, marry or move on.

This all goes exactly as well, which is to say as badly, as you would expect. Soon, contestants are sobbing, viewers are hoarse from screaming at the screen (the utter fury on Alexis’ face when she chisels out of Colby – during their second drink – that he doesn’t see himself marrying her lives with me still), and the Lachey/Netflix accountants are cracking open the champagne in their toxic lairs. The crack-meth blend is as potent as ever. Within 15 minutes, the lizard part of your brain is hopelessly invested and the higher functions can only pray for the accelerated heat death of the universe before the remaining nine and three quarter hours are up.

It’s absolutely terrible. Morally, obviously, there is literally no justification for deliberately putting temptation in people’s way (I believe it is one of the tenets in fact of quite a few world religions). Creatively, it’s bankrupt. Educationally, intellectually it’s … not. Every other word out of every other mouth suggests we should build a pyre and place feminism atop it, for the battle is surely lost.

But, oh, the entertainment. Oh, the escapism. Oh, the glory of letting hate for this and that blonk, and love for blermp 2A, who looks to be moving towards her rightful place on the arm of new blonk 6B flow untrammelled through you, washing the mental detritus of the day away and leaving you cleansed, empty and ready for the next day’s accrual of cares and woes. It’s shit – but you can’t move on.