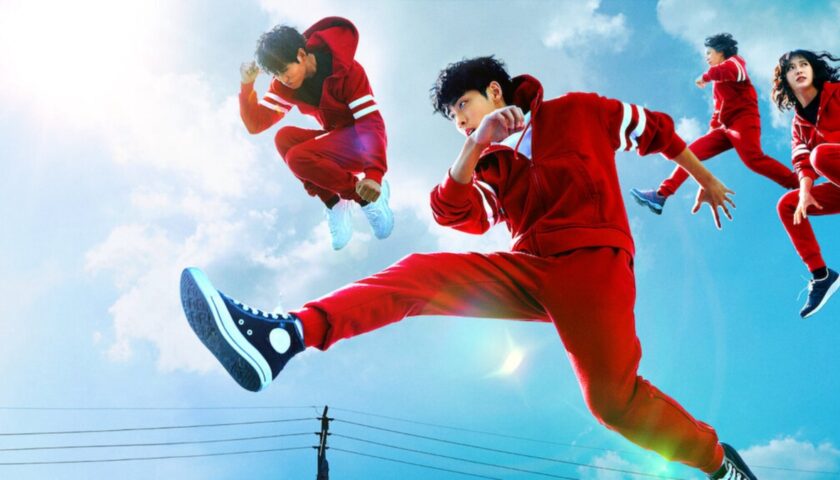 If you love marvel movies then drop what you are doing and watch The Uncanny Encounter on Netflix. It is fun. They took all the Korean drama love, put it in a smoothy blender, dropped some campy sugar in there, a dollop of superhero powers, a few track suits, and some demon spice with a side of bullying and handed it to me to slurp right up.

The Uncanny Counter is what I would describe as a comic book come to life. In this case it would be a webcomic but you get what I mean. In all these stories there is a backstory that defines our main hero, usually the loss of a parent or both. This backstory will go on to inform their current life and turn them into a superhero.

Well that is the case with The Uncanny Encounter. Our hero, So Moon, is a high school kid with a limp that he got from the car accident that killed his parents when he was a little kid. However, some sinister things were occurring on the night of this car accident which makes you wonder, was this really an accident.

He doesn’t know any of that of course. He lives with his grandparents now, has two best friends, and leads a happy life. Well, except for the trio of bullies that are making his friends life miserable.

He gets his super powers in the first episode when The Counters (the super hero group) run into a level three demon (yes, the demons have levels!) that that kills one of them. The spirit occupying that Counter (they call themselves Counters) flies out and has to find another body to occupy.

Usually the spirits occupy people who are in a coma. But this spirit hops right into So Moon when he is walking with his friends. So Moon gets kicked horizontally 20 feet into the air (though no one notices) and lands on his back. When he stands up, his hair goes curly one lock at a time (in possibly the cutest superhero power scene ever?).

The Counters find him and try to convince him to become one of them and fight demons. They help him go to the spirit world that is in between Heaven and Hell to talk to the spirit that is occupying his body. She explains everything to him, but the kicker is, she tells him that he could die doing this.

So Moon is all like, um, well, this sounds cool and all but I can’t die. I can’t put my grandparents through that kind of heartache twice. So I’m going to bounce, but can I have some of your soup tomorrow?

(Yes, there is this entire soup thing in this show because the Counters run a trendy soup restaurant that is the bees knees. Lines all up and down the street to get in. Three hour waits are common place.)

The Counters can’t believe it though they know it is well within his right to say no. So they let him go. However, as soon as So Moon steps out of the restaurant, he gets a call from his friend that is horribly bullied. So Moon goes to help his friend and ends up getting beaten up by these bullies. Though, his powers do kind of come out and allow him to stop one of the bullies punches.

He is unable to replicate that though which is why he gets punched into the ground and passes out. But, The Counters come to the rescue and take out these bullies using their powers. They also have the ability to erase memories so the bullies don’t even know they got beaten up.

The Counters heal So Moon by healing his injuries and his disabled leg (yes, they have that power too) and convince him to come out with them on a job. During this job So Moon saves a kids life which makes him feel amazing. Because of this, he decides to train to be a counter.

Cue training scene where everyone beats him up in the nicest way possible. He also jumps a building when the Counters want to see who can put their handprint the highest. All the counters drop their mouths to the ground. Um, that was amazing and was very similar to their Counter friend that just died.

Now that So Moon is fully on the team, they start to tell him everything he needs to know about being a counter. For instance, there are energy spots around Seoul that will amplify their powers. They only fight level 3 or higher demons on these spots.

The demons hunt out people doing evil things and make them do even more evil things so they can eat the spirits of the people they kill. Once they eat 3-4 souls, they become level 3 demons. So they need to stop the demons before that happens.

I would have to make a different post on their powers and the rules of magic in this show because that is a really fun part of the watch. They each have a different power though they each also have a little bit of each other’s power. It’s cool.

At the end of episode two, the team feel a level three demon nearby. They all run out to get that demon. But they only want to fight it on their territory so that their powers will be the most powerful. If they step off their territory then the demon could kill them.

Not a bad way to end the first two episodes because I definitely want to see what is about to go down.