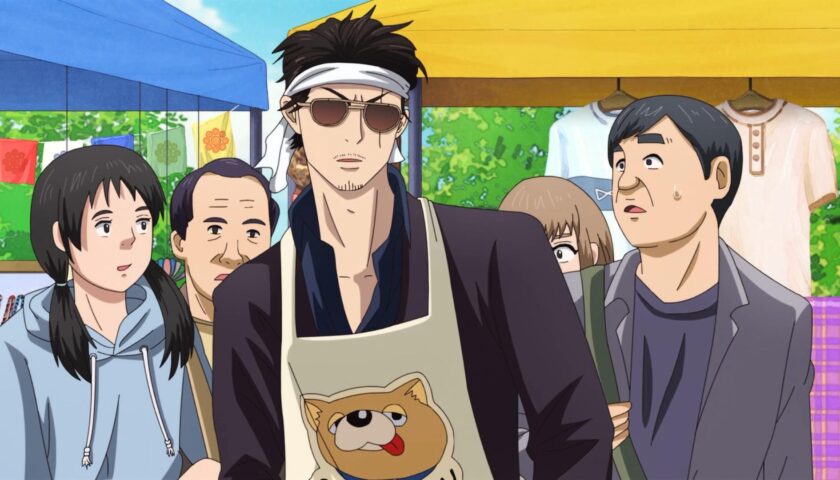 The anime adaptation of The Way of the Househusband is one of the most faithful I’ve ever seen. It’s basically a colorized, narrated version of the manga. This is excellent, in that the show captures all the jokes. The contrasting illustration styles are heightened, with the addition of color and the voices of the cast.

Yet it’s also disappointing, as it feels like a transposition rather than an adaptation. If you’ve read the manga, you’ve seen the anime. Furthermore, the series’ five episodes only tell stories from the currently available English volumes.

Each 20-minute episode retains the highly episodic style noted in other reviews. While it’s awesome to see these scenes bigger, in color, and with music, they don’t add anything to the concept. It’s just the manga, except the show separates the panels into still scenes and uses time rather than physical layout to tell the story. And in that transposition, you lose something of the story.

When you have a graphic novel, it’s easy to take a break between each chapter. Pause. Revisit the sight gags and admire Tacchan’s cooking before moving on. The physicality of the book allows for a nice contrast between the set up of daily chores as epic battles with the reality of it being a slice-of-life comic.

However, the animation choices take that away. Rather than mimicking a 24-frame-per-second show, the anime appears to pan over still imagery. When characters walk, they are not part of their environment but rather float above it. We don’t get to actually see Tacchan’s cooking bubbling, or his skilled chopping techniques. Instead, it’s like pulling a colorized version of the manga away from your face with some jazz going on in the background.

While it could be a fun set up — bringing the style, layouts, and panels of the comic into the anime — the pacing of these transitions make the stories feel rushed. Unless you pause the show, the “panels” just keep coming. As opposed to reading on your own, having the animators be in control of how long you spend on each panel can make it difficult to get as much out of the story. Additionally, the structure of each episode as multiple mini-stories reinforces that feeling. You finish one story, and then the show immediately thrusts you into Tacchan’s next adventure. There’s no room to delight in his culinary creations, or breathe in the nice citrus smell that scares the bugs away after Tacchan and Miku fail to kill a cockroach.

While I acclimatized to the pacing and loved the addition of the music to set the tone in scenes, the anime just lacks the ability to savor everything like you do when you read the manga. Don’t get me wrong, it is still fun. Unfortunately, the show seems to assume that the premise will carry the show all on its own, when they should’ve considered adding more depth with the medium change. Each episode feels like a series of yakuza-as-househusband gags with no real time to reflect on what they really mean. The anime focuses more on the action at the expense of the heart of the story, which was what allowed the manga to transcend its silly premise to begin with. (This overly faithful animated transposition makes me curious about the live-action adaptation. While currently unavailable in English, I hope it went the route of a series like Midnight Diner, another manga adaptation available on Netflix that explores a few Yakuza slice-of-life stories.)

Lastly, the sameness of this adaptation makes me question why they adapted it this way at all, especially when similar stories don’t get the opportunity to air on such a large platform. Specifically, I wonder about the parallels between this and Akiko Higashimura’s Himozairu. Published in 2015, three years before The Way of the Househusband, the story centered on unemployed young men who try to make themselves more appealing to career women by learning domestic tasks. That series was quickly withdrawn by the author amongst complaints. What changed in three years that allowed Oono’s work to thrive, and get two different medium adaptations and an English translation, while Higashimura’s piece couldn’t get a full volume?

For fans of the manga, I’d say unless you really like narration and a soundtrack, stick with your tankōbon. If you don’t have time to read, the anime will suffice, and will provide a solid soundtrack and dialogue. However, if you were hoping to find new depth in this adaptation, perhaps some variation in how to househusband, this isn’t where I’d look.