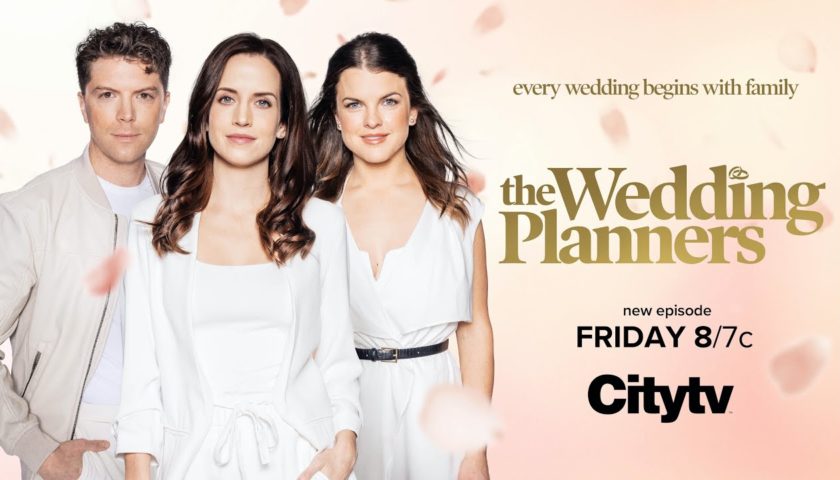 A few weeks ago, on the last set visit I’ll probably get to make for a while, I drove out to Newmarket, Ont., to interview the cast of The Wedding Planners. The eight-episode series premieres Friday, March 27 on Citytv.

Interviews took place in one of several century-old churches that surround the quaint-looking main street of the city. Another church served as a holding centre, with the adjoining gym turned into a cast and crew lunch room.

I asked the cast to single out a tune they’d like sung at their own weddings. Check out the above video for their answers and listen in as they sing a few bars. The ladies, who spontaneously harmonized and should sing on the series, threw themselves into a lively rendition of “Going to the Chapel.”

The production company behind The Wedding Planners is called “Brain Power,” and it has its own family business structure. The company has financed 17 features and many hours of television series episodes, including many Christmas-themed titles.

Executive producer Beth Stevenson led reporters and influencers through a large house that is secluded in the woods about 20 minutes outside Newmarket. (The company also has production facilities in Barrie.) Stevenson explained that the house was purchased with the express purpose of turning into the home and display centre for the fictional “Clarkson Wedding Essentials” business run by the three siblings. The tour took us through several upstairs rooms that have been dressed to look like a wedding dress display and sewing centre and the businesses main office.

Pretty ingenious, I thought. If you’re going to risk getting into the Canadian TV and film production business, better make sure your business plan also includes real estate. Clearly, the folks behind Brain Power are not novices, having cranked out family-style TV-movies, many featured now on Amazon Prime, for several years.

The cast and crew had the good fortune to wrap production before the corona virus began to impact filmmaking across Canada and the rest of the world. If you’re looking to escape the dire headlines of the day, Friday’s premiere of The Wedding Planners on Citytv probably can’t come fast enough.

The series follows the Clarkson siblings as they endure their own family drama while helping to plan a dream wedding for happy couples-to-be. The series follows their troughs and crests as a family and their complicated relationships. Siblings Paige, James, and Hannah have to face the loss of their mother Marguerite as they pick up the pieces of the many years of weddings Marguerite left for her children to fulfill. As they reconnect with each other, they take up the family business to honor Marguerite’s legacy.

Murray plays the role of Paige Clarkson in the show, a young mom has to find the balance between her work and her family commitments. She is an actress and producer and is known for her role as Danika Dubov in ‘V Wars,’ Andrea in ‘Love Alaska,’ Seelie Queen Amara in ‘Shadowhunters,’ and Vanessa in ‘Art of Falling in Love

Seater plays the role of James Clarkson in ‘The Wedding Planners’, a man with a troubled past making it big in New York City as a fashion designer. He is a Canadian actor, director, screenwriter, and producer and is best known for his role as Derek Venturi in the Canadian sitcom ‘Life with Derek.’ He has directional credits for ‘People Hold On’ (2015) and ‘Sadie’s Last Days on Earth’ (2016) as well. Other cast members include Madeline Leon (‘Ponysitters Club’) as Hannah Clarkson and Michelle Nolden (‘Saving Hope’) as Marguerite.