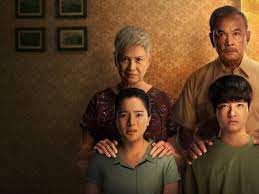 The film – directed by Wisit Sasanatieng – stars Sompob Benjathikul, Sadanont Durongkaweroj, and Steven Isarapong, and follows the story of two siblings, who uncover some disturbing information about their family, while spending time at their grandparents’ house.

In the film, Pim and Putt go to live with their estranged grandparents, after their mother sustains life-threatening injuries in a car accident. Although the pair are unfamiliar with their elderly relatives, having not been aware of their existence before, they do their best to adapt to the current situation.

Things seem to go well to begin with, but during their first evening at their new home, Pim and Putt notice a hole in the living room wall. Pim asks their grandfather if he plans on getting the hole repaired, but he doesn’t quite understand what she means and says he has no knowledge of any structural problems or blemishes.

When Pim shows her grandparents what she is referring to, they both claim they cannot see any hole. This seems incredibly odd to Pim and Putt as there is clearly a big gap in the wall.

The next day, Putt peers into the hole and sees something disturbing. A short while later, Pim takes a look for herself and is equally as unnerved about what she sees.

But is this real or are they imagining it? And even if the hole isn’t quite what it appears to be, why are their grandparents acting so oddly about it?

When The Whole Truth began, I must admit it had me quite interested in the set up. The idea of the two siblings going to live with their estranged and somewhat kooky grandparents, had deep shades of The Visit (2015) about it, and I was intrigued about where the story was headed.

But around the midway point of the film, I started to find myself losing interest in the story, and as the picture moved into the second half, I began to get a little bored. Heck, at one point I even found myself zoning out and thinking about what items to add to my monthly grocery list – that’s how disinterested I started to become.

This is not to say The Whole Truth is a terrible movie, or the contents of my shopping list are far more important than an expensive feature film (although, they clearly are to me), but it is to say the film loses momentum. This loss of momentum begins once the children start to look into the hole, and from here the movie never really recovers.One minute it is mildly interesting and the next minute it is not.

I won’t say what is behind the wall, but it is very underwhelming and rather generic. It is also something which is not scary in the least, and because of this, any tension that is built up at this point in the movie is instantly defused.

Things do pick up a touch as the film heads towards its resolution, but it only picks up momentarily. A few twists and turns are tossed at the screen, but they mostly fail to elicit any real excitement, and despite another quick burst of passable storytelling, it slumps back into dullsville once again.

The problem with The Whole Truth is, there’s nothing in this movie that hasn’t been seen or done much better in other pictures, and there is simply no escaping this. Even when it tries to conjure up something noteworthy, it falls short.

The cast do their best with the material they are given, but they mostly go through the motions of putting Tab A into Slot B, while faffing around looking for workable parts. The hope is that something is being constructed of value, but the reality is far from it.

Unfortunately, after two-and-a-bit hours, I couldn’t help but feel they’d wasted their time, and wasted my time in the process. The creepy, tense film I hoped it might be, didn’t pan out, and the overcooked offering that was served up tasted rather bland.

Ultimately what is presented with The Whole Truth is not very interesting. It is long-winded, and far too run-of-the-mill.

The film isn’t awful, but it’s not very good either. As a thriller it doesn’t thrill, and as a horror movie it doesn’t terrify; and sadly, that’s the whole truth.