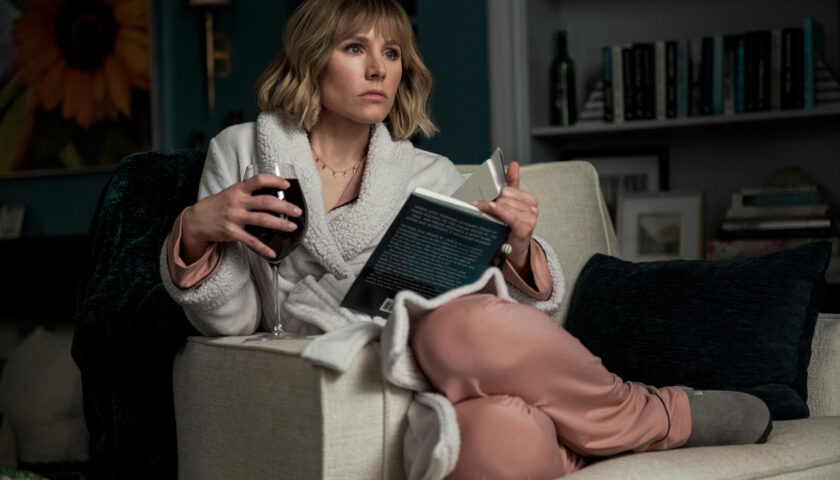 Back in 2015, Will Ferrell and Kristen Wiig starred in an actual Lifetime movie called A Deadly Adoption. It was not supposed to be funny — and that, Ferrell later explained, was the joke. “I always had this idea to take comedy people and do a Lifetime movie straight-up,” he told Conan O’Brien in 2018. “We played it totally straight.” Audiences were understandably disappointed — they came for a parody and instead got performance art.

By contrast, the creative team behind Netflix’s The Woman in the House Across the Street From the Girl in the Window (premiering Jan. 28) clearly aimed to make something funny; the title alone practically pauses for laughs. But the spoof thriller still has a Deadly Adoption problem, largely due to its hit-or-miss approach to comedy: When it comes to jokes, The Woman in the House either flogs them to death or misses them completely.

Anna Whitaker (Kristen Bell) doesn’t have a lot to live for. Three years ago, her young daughter (Appy Pratt) suffered a gruesome death, and soon after, her marriage to an even-keeled forensic psychiatrist named Douglas (Michael Ealy) crumbled. Now she spends most of her time getting wine drunk while staring out the window of her ivy-covered suburban home. When a handsome widower, Neil (Tom Riley), and his sweet daughter, Emma (Samsara Leela Yett, a little star in the making), move in across the street, Anna imagines a new beginning might be possible — until she witnesses a murder in Neil’s living room. Or maybe it was just a boozy flight of fancy, brought on by a bottle of red mixed with too many meds? Though Anna’s protective best friend (Mary Holland) and a sympathetic detective (Christina Anthony) urge her to move on, she launches into full citizen-detective mode, determined to solve the case of her own sanity.

Creators Rachel Ramras, Hugh Davidson, and Larry Dorf (the stars/writers of Nobodies), and director Michael Lehmann (Heathers), are clearly well-versed in the genre they’re toying with here. The premiere establishes a simulacrum of the standard suburban psychological-thriller setting, complete with all of the obvious “something’s not right here” warning signs. Buell (Mindhunter’s Cameron Britton), the handyman who spends his days fixing Anna’s mailbox, seems a little… off. Anna’s judgmental neighbor Carol (Brenda Koo) fuels gossip around town that she’s “bats— crazy,” and there’s definitely something thumping around in Anna’s attic — unless it’s just the house settling? When she’s not reading mysteries with names like The Woman Across the Lake and The Girl on the Cruise, Anna uses her limitless supply of Corningware dishes to make chicken casserole, perhaps the world’s most suburban meal.

Once the table is set, though, this meal drags on forever. The Woman in the House takes its sweet time with everything, stretching maybe 90 minutes’ worth of mystery over eight half-hour episodes. In lieu of story developments, we’re treated to detours and diversions, protracted set ups, and sporadically lethargic pacing. Anna’s early infatuation with Neil takes her down an instagram rabbit hole as she looks for dirt on his girlfriend, Lisa (Shelley Hennig), but her amateur sleuthing eventually leads her to question whether Neil is the nice guy he seems to be. The writers are especially fond of elongating their comedy — perhaps with the hope that if they draw their jokes out long enough, they’ll go from funny to not funny back to funny again. It worked brilliantly for The Simpsons and Sideshow Bob, but here it just adds another layer of drag to an already sluggish endeavor. Characters stew in awkward situations that never quite break the comedy barrier — as when Anna’s acquaintance (Ramras) notes that the phrase “autoerotic asphyxiation” is difficult to pronounce, and then the two women just stare at each other for a few beats. Anna says “bingo” after unearthing an important piece of information about Neil — once, twice, three times in a 90-second scene. That’s the joke, on paper at least.

Woman in the House is funniest when it gets truly, unexpectedly weird. The series’ most successful running gag centers on Douglas, who is catastrophically clueless, and Anna’s journey concludes with a climactic showdown that is, to quote Carol, “bats— crazy.” Actually, I shouldn’t say “concludes,” because the finale continues for another 11 minutes — long enough to deposit Anna in the middle of a new hazy mystery, this one featuring an A-list cameo. There’s no doubt that the showrunners want Woman to be a parody, but the humor is oddly toothless — and satire without a point of view is like a casserole with no crunch.