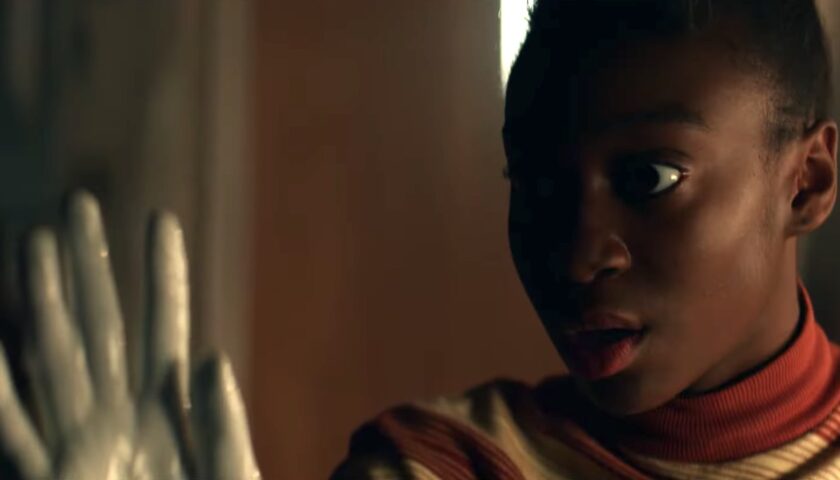 The fissures racism has carved into American life, and American lives, are so surreally deep that to convey them, artists must use the tools of exaggeration that genre provides. This strategy has been deployed several times over in recent years: Notable entries on television include “Watchmen” and “Lovecraft Country,” a superhero serial and a horror saga that narrate the legacy of hate in 20th-century America.

In their wake arrives “Them,” a limited series for Amazon Prime Video created by Little Marvin and executive produced by Lena Waithe. In the first season of what Amazon is calling an anthology, Marvin shows us a Black family moving from North Carolina to Los Angeles as part of the great migration of the 1950s, punished upon arrival by a racism that they couldn’t have imagined. As played by Ashley Thomas and Deborah Ayorinde, parents Henry and Lucky Emory refuse to be victims, even as the world around them seems committed to dragging them to hell. (Their daughters, played by Shahadi Wright Joseph and Melody Hurd, face terrifying troubles of their own.) Haunted by memories of the past they sought to escape back East — a time when the family suffered a graphically depicted act of racist violence committed by a deranged character, wildly overplayed by Dale Dickey — the couple are bonded in old trauma and new struggle. At one point, Lucky hallucinates her younger daughter’s hair lit on fire by a hot comb, while Henry envisions an apparition of a blackface performer. The terror visited on the Emorys over the course of their first 10 days in their new home in Compton is both of the sort committed by humans and of the sort that can only be explained in supernatural terms

This represents a problem for “Them,” one that comes to a head in the form of a character played by Alison Pill. The self-appointed head of the welcoming committee, Pill’s Betty Wendell becomes an avenging devil when she sees the race of her new neighbors. She fumes and fulminates over the presence of Black people in her community; at one point, in a rage, she tears the paper off the walls of her home. “If a dog bites, you put it down!” she shouts at a confidante, urging violent action against people she sees as little more than animals. Such prejudices are all too real, but “Them” can’t resist giving Betty a backstory that implies her fury originates from a kind of dissociation, one with sinister and vaguely incestuous undertones.

“Them” centers on racism in a manner whose reliance on overstatement winds up feeling surprisingly unimaginative. If we are to have a story about hatred in 1950s America, horror elements might be potent instruments in rendering the seeming powerlessness and frightening isolation of Black characters. (Indeed, the fact of Compton’s restrictiveness about allowing in Black families in the immediate postwar era is depicted, through scenes spent with a dissembling real estate agent, with a creepy tension that suits the material.)

To use the supernatural as an explanation for the hate said characters face, though, lets the show’s more realistic malign elements off the hook a bit. Treating Betty as a monster means not having to investigate the idea that prejudices like hers exist within humans too.

The series gets a great deal right: In visual style and in the performances of the actors playing the Emorys, it captures a recognizable 1950s of the mind. A striking early sequence sees the family in integrated settings, being assisted by white employees at an appliance store and a soda fountain. The point is made, elegantly, that the Emorys have left behind the explicit bigotry of the American South for a place where the horrors are more insidious. Thomas and Ayorinde never evince a sensibility that is too modern for what “Them” is trying to do. Their characters feel of their time, and the show’s focus on the specifics of their situation allows the viewer to see how certain facts of American life persist through the decades.

But as the actors are overtaken by the animus against their characters, those characters get lost; we learn much more about what Henry and Lucky Emory must overcome than about who they really are. They’re the victims in a horror story — and there’s nothing wrong with that but for the potential insights that it leaves unfulfilled. Portraying the worst sorts of American bigotry such that we might learn from them is an interesting goal; doing so at punishing length without a clear endgame or compelling ideas arrives in a place of trivialization. The Emorys suffer terribly because they are Black and, after they move, because they have the audacity to take up space in a white neighborhood. But their suffering, as it stretches over 10 episodes (with an episode-long break, late in the series, for an austere look at an earlier instance of anti-Blackness in American history) reaches a point of excess that serves this project’s impulses as a genre show more than as one with something to say.

“Them,” with performances as Grand Guignol ludicrous as Dickey’s and Pill’s, and as vexed by pain and punishment as Thomas’ and Ayorinde’s, leans too hard on scariness at the expense of what truths those scares are meant to show us. Though it doesn’t lose sight of racism exactly, the show’s mind seems more firmly placed on the ways in which it might make us jump than make us think or feel. It’s an unfortunate reversal of the way series that look like it use genre to investigate race: “Them,” in the end, takes the far less interesting path of using race to investigate genre.