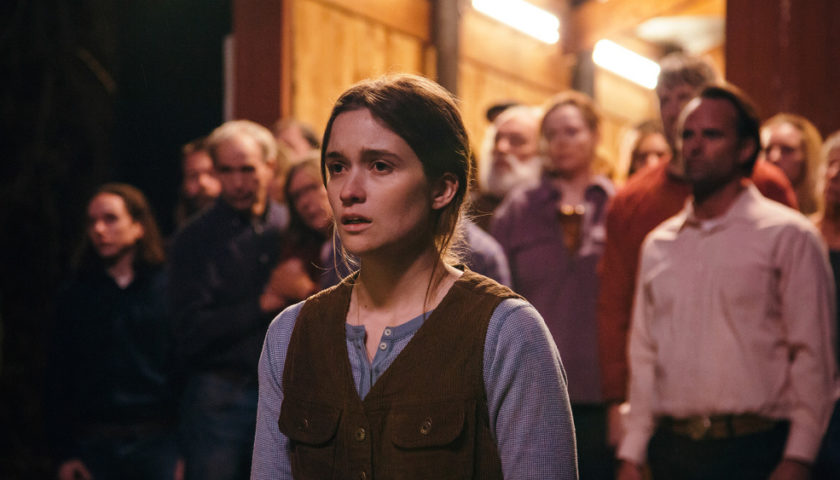 Review: It takes up to 48 hours to die of a rattler bite. For the Pentecostal snake handlers of Britt Poulton and Dan Madison Savage’s debut, “Them That Follow,” that’s two days to pray, bicker, and wonder if your faith might be poisonous. Augie (Thomas Mann) was born doubtful. But up on this Appalachian mountain, he’s the only one who is. His devout parents, Hope and Zeke (Olivia Colman and Jim Gaffigan) have grudgingly started to accept his apathy. But his secret childhood sweetheart Mara (Alice Engler) is considering marrying dweeby zealot Garret (Lewis Pullman) to please her dad (Walton Goggins), the reptile-obsessed preacher.

This patriarchal, anti-science church in the woods lit by a stark neon cross does not come off well. Yet in Poulton and Savage’s empathetic script, the only villain is Satan, who the locals blame for everything from asthma to sex. The parishioners believe in a literal reading of Mark 16:18: “They shall take up serpents … they shall lay hands on the sick, and they shall recover.” To fight damnation, the people believe they must test God’s love with a deadly snake. The sinner allows him- or herself to be coiled and squeezed, and if the rattler strikes, the trial has begun.

George Wendt Hensley, a drunk, popularized serpent handling in 1910, married four times and eventually died of a rattler bite. Roughly 100 other apostles have died since, including “Snake Salvation” reality TV pastor Jamie Coots, who wrote a 2013 editorial in The Wall Street Journal defending the practice under the protection of religious freedom. Coot was fatally bitten four months later, and his son now leads the church.

If the “Them That Follow” of the title are adherents like Mara and her father, those deadly stories don’t shake their beliefs. To them, it’s simple. Live, and you’re forgiven. Die, and the spirit has spoken. As for a hospital, that’s cheating — worse than cheating, in fact, as it cues the law to ransack the chapel and confiscate the nest. And for Mara’s dad, cops mean jail.

Yet, Mara has a secret. Before she shares what it is, we see her watch a rattler attack a partridge and then turn to her as if to vow, You’re next. Still, she’s a true believer — you can see it in the way Engler’s eyes burn when she lifts her arms to the Lord. Though her love triangle ignites the very slow burn that tests our patience for how long folks can go without saying what they mean, the real competition is the way everyone in the church is more loyal to God than they are to each other. In the last act, Poulton and Savage’s long fuse explodes, and they get to prove they’ve made a hell of a picture.

There’s no sun on this mountain. Cinematographer Brett Jutkiewicz seems to have held out for flat gray skies, and he shoots his characters under giant trees that make this community feel at once remote and claustrophobic. But like so many other conservative religions, the Pentecostals’ treatment of women like Mara and her heartbreakingly lonely best friend, Dilly (Kaitlyn Dever), feels familiar: hair to their waists, skirts to their ankles, and men — even the ones who claim to love them — focused on their purity. Mara’s father doesn’t even want her to drive, and when she irritates Garret, a sensitive boy with a sinister button nose, he commands her to wash his feet.

Colman’s Hope, who also goes by the name Sister Slaughter, used to live a venal life off this mountaintop. “Buncha dumb sheep just wandering in the dark,” she tells Mara. Hope’s husband is her shepherd, and it’s a tribute to the Oscar-nominated Colman’s talent that she feels deeply, credibly complicated even with the most potentially cartoonish character in the film. (At one point, Hope even wears a T shirt with a wolf howling at the moon, for Chrissakes.)

“Them That Follow’s” truest test of faith is that Poulton and Savage don’t force the audience to demonize their devotees. The movie respects their beliefs — or at least the sincerity of their beliefs. Even in the darkest moments, when the ominous organ music is pounding and the filmmakers have twisted the audience into a quivering ball of nerves, the duo trusts in the goodness of people, even when they put themselves through insane tests. There’s rattlers in them hills. But there’s love too.