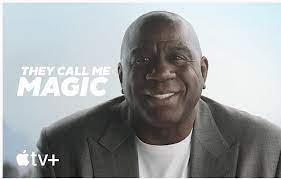 That’s how Magic Johnson describes his 1991 appearance on Arsenio Hall’s talk show in the new documentary “They Call Me Magic.” It was a key moment in Johnson’s public life, coming just after the basketball star’s announcement that he had contracted HIV. And it’s slightly telling that what Johnson recalls is not any particular thing he said but the applause of the audience for whom he was putting on a show.

Johnson, throughout both his athletic and business careers, is as close to an entertainer as an athlete gets. And “They Call Me Magic,” though often glowingly promotional, does an elegant job of depicting the mentality of a figure who needs his public just as much as they need him.

The contours of Johnson’s story will be familiar to anyone currently watching HBO’s “Winning Time,” about the so-called “Showtime” era of the Los Angeles Lakers. The team was invigorated by owner Jerry Buss’ approach to presenting sports as sometimes salacious amusement, and by a new superstar out of Lansing, Michigan. We see how Magic got his nickname as a high-school phenom, and the unusual amount of attention that attended him — his decisions to attend Michigan State, and then to go pro before graduation, were both media events.

This milieu is fascinating and well-drawn by director Rick Famuyiwa; the Showtime era is the strongest portion of “They Call Me Magic.” The straight-ahead nature of Apple’s documentary is more effective in illustrating the pressures on Johnson than is the frenetic “Winning Time.” With that said, Johnson is an imperfect documentary subject, especially by comparison to the voluble and emotive Michael Jordan in the docuseries “The Last Dance.” (Jordan, along with several other basketball stars as well as two U.S. Presidents, appears as a talking head here.) Johnson is squarely undemonstrative, as well as something less than completely open. Especially after the story moves to his HIV diagnosis, it’s apparent there are lines of conversation he won’t pursue.

Which means that this series can sometimes fall into the trap of narrating precisely what its subject wants; moments in the final episode in which we run through a laundry list of Johnson’s post-basketball accomplishments in business endeavors are precisely the sort of thing that would, rightly, have been cut were this a two-hour feature film instead of a four-hour series. And there’s a certain heavy silence around Johnson admitting his initial reaction to his son’s coming out, though we’re told he eventually made his peace with his son being gay. (What changed, and why? These are questions the documentary doesn’t dig into.)

What is easiest to glean from Johnson’s speaking to camera, though, is his endless delight at impressing his audience — not just the joy of winning but the pleasure of being seen winning. And in the main, “They Call Me Magic” is both an engaging look at the impact this charismatic, endlessly newsmaking figure had on his era and an occasional glimpse into the mentality of a performer.