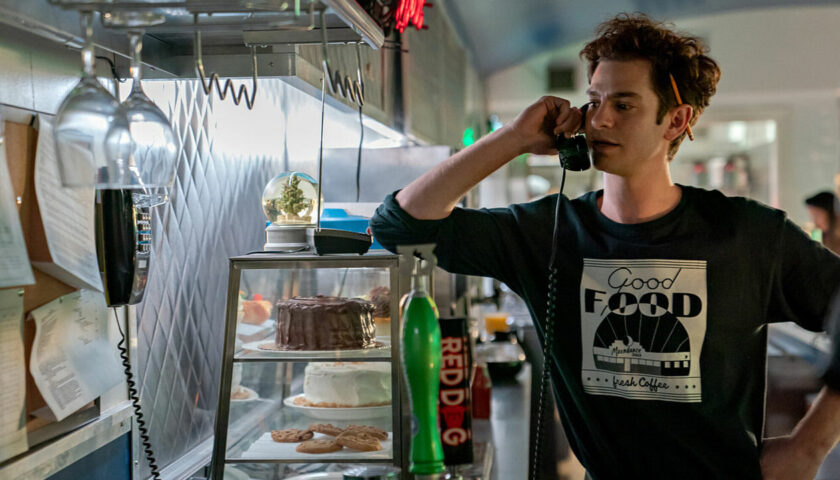 Greetings again from the darkness. Success comes in many shapes and sizes. Sometimes it brings happiness, glory, and financial gain, while other times there is an emptiness or sadness. Who better than Lin-Manuel Miranda (of “Hamilton” fame) to direct the cinematic tribute to composer and playwright Jonathan Larson? You likely know Larson’s name from his long-running Broadway smash hit, “Rent”, but this is his autobiographical project based on his early struggles in trying to write the next great American musical. It has been adapted for the screen by Steven Levenson (“Fosse/Verdon”).

Opening in January 1990, a full (i.e., long) version of Larson’s “30/90” song kicks us off with singing, dancing, and choreography. It’s important to note that this was the era of AIDS raging through the New York arts scene – people were dying, and friends were frightened. Andrew Garfield leaps into the role of Jon, sporting Cosmo Kramer hair, and a boundless, frenetic energy that overshadows his friends and loved ones. Jon is in full panic mode as his 30th birthday approaches and he rushes to finish his futuristic rock-musical “Superbia”, which he expects will be his springboard to stardom. In the meantime, he works at the Moondance Diner while remaining committed and obsessed with his art.

Director Miranda adds a structural element with cut-aways to Jon (Garfield) performing his own musical onstage at New York Theater Workshop. However most of the run time is focused on Jon’s writer’s block associated with the final song he must write. His idol, the legendary Stephen Sondheim (Bradley Whitford) advised him of the importance, and we aren’t sure if the block stems from this or the fact that it’s the final missing piece. Garfield is exceptional as the self-absorbed, and obviously talented Jon. As his friend and roommate Michael (Robin de Jesus, THE BOYS IN THE BAND, 2020) has surrendered his dream of art for a well-paying advertising job, it’s clear that Jon still believes art can change the world.

Alexandra Shipp (LOVE, SIMON 2018) plays Susan, Jon’s dancer-girlfriend. She also is considering the reality of a teaching job versus the dream of performing, yet Jon is too immersed in his own work to take heed of her warnings. He is so against ‘selling out’ that he even cruelly debates Michael on the pursuit of creature comforts. Of course, much of this would eventually lead Larson to write “Rent”, but this film doesn’t cover that period. Vanessa Hudgens (HIGH SCHOOL MUSICAL franchise) and Broadway standout Joshua Henry perform much of the singing here, but Garfield holds his own on the musical and dance numbers.

Other supporting roles are filled by Judith Light as Jon’s agent, Rosa Stevens, and Richard Kind as a both-sides-of-his-mouth stage critic, while director Miranda makes a cameo as a short order cook at the diner. The challenges of New York City life in the art world are clearly shown here, and mostly this is a loving tribute to Jonathan Larson by his admirer Lin-Manuel Miranda … with an exciting performance from Andrew Garfield. It’s an entertaining production that never pretends to offer up inspiration or false hope to the dreamers in the audience.