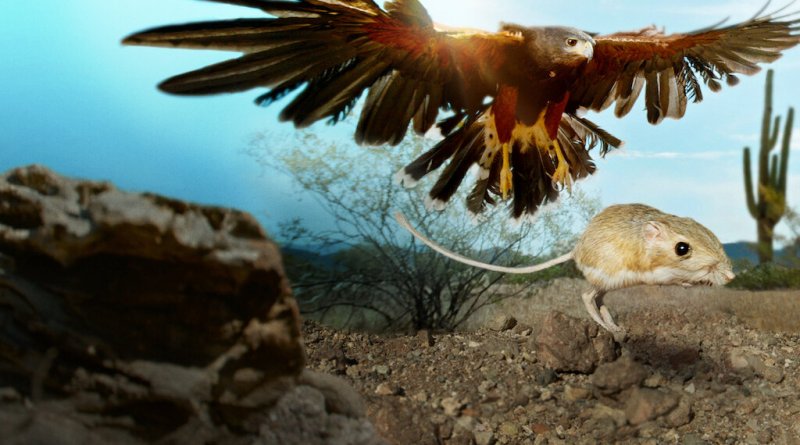 Tiny Creatures, a series of short nature films created and directed by Emmy-winning fillmmaker Jonathan Jones, take some of this planet’s smallest — and in some cases, most misunderstood — animals and sends them on adventures. The remarkable thing is that each episode, which takes place in a different region in the U.S., was shot in his backyard studio in England, all during the current pandemic lockdown. Does he make the locales (Arizona, New York City, Texas, Minnesota, Louisiana, Florida, New Hampshire and Washington) look like the real thing?

Opening Shot: Shots of hills and canyons in the Sedona desert. “Arizona, home of America’s great wild west,” says narrator Mike Colter. “Where legends are made and only the courageous survive.”

The Gist: The first episode takes place in Arizona, following around an adolescent kangaroo rat as he tries to survive. A kangaroo rat has huge hind legs that let them hop around and skitter away from predators pretty quickly. And as we see in Jones’ footage, there’s plenty of danger around the little guy.

Let’s start with the diamondback rattlesnake that was about to devour him, until his mother sacrificed herself for her child’s life. Then, as the snake makes a home in the teen rat’s burrow, the rat is spied by a gila monster, a tarantula, a scorpion (that’s eaten by a scorpion mouse), and — most dangerously — a Harris hawk. He also has to avoid human dangers, like a dirt biker doing donuts in the sand and a guy with a rifle shooting rusty tin cans.

The rat needs to go back to his home burrow, so he hatches a plan; have the snake follow him back to the burrow, then lure out the diamondback and let the two fight it out while he goes back in his nice, safe, cool burrow. Does he succeed?

Our Take: Even if you didn’t know exactly how Tiny Creatures was made, one watch and you know that it’s not structured like your typical nature show. Yes, all nature shows have plots that they work the footage they get around. But Tiny Creatures is shot like a mini-movie, and you can tell. Sets are made, plot points are planned out, and there’s lots of green screen and CGI.

But it all looks spectacular. And then when you read up on how Jones, known for his work on Planet Earth II, actually made the series (in 27 days, no less!), the results are even more remarkable. Shooting everything in his backyard, using animals that are not native to the British location where he lives — lots of socially-distant handlers were on set — Jones was able to faithfully recreate a movie-set version of each locale that looked real enough to more than pass as the actual location.

Does it look more like a movie set and less like the great outdoors from time to time? Absolutely. But considering the limitations Jones was under, the fact that he even got 90% of the way to real is amazing. Also, it helps to know that no critters got hurt during the making of the show. So the little kangaroo rat’s “mom” likely took a break with a thimble of water after the snake attack scene, info which will likely make any little ones watching the show with you feel better.