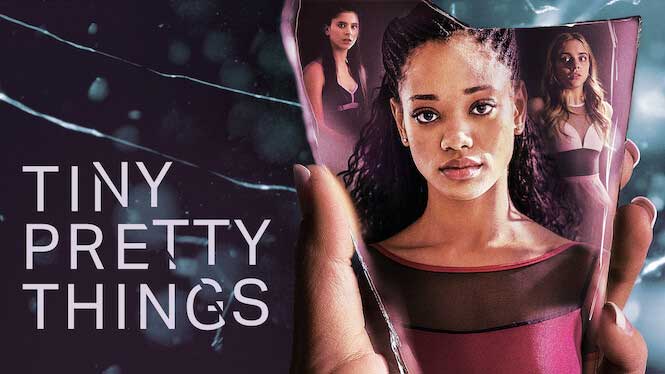 The girl on the roof, Cassie Shore (Anna Maiche), is joined by a hooded suitor with a white rose. She tries to resist his advances and eventually stumbles backwards off the roof, falling to the pavement below.

Immediately after Shore’s accident, Neveah Stroyer (Kylie Jefferson), a dancer from Inglewood, California, is selected to take her place. at the Archer School, an elite ballet academy. She’s a pick that the school’s president, Monique Dubois (Lauren Holly) hopes will show that the school is interested in diversity and lifting talented kids up and giving them a chance.

As soon as she speeds to her first dance class, she’s confronted by the competition she is going to face. First is Bette Whitlaw (Casimere Jollette), whose sister Delia (Tory Trowbridge) is a principal dancer for the dance company that performs at the academy’s theater; she sees Neveah as a threat, despite saying out loud that she doesn’t think Neveah has the talent.

In the meantime, her roommate June Park (Daniela Norman), who is already struggling with the trauma of Cassie’s accident, is also under pressure from her mother to excel at the academy; if she doesn’t become a principal dancer, her mother thinks it’s a waste of time and money. Yet she can’t even get the ballet master’s eye so he can give his copious criticisms. When the beat cop who first responded to the scene when Cassie fell, Isabel Cruz (Jess Salgueiro), keeps pressing for answers, even after the initial phase of the investigation is over, June eventually opens up and gives her some clues.

The boys are just as cliquey; Oren Lennox (Barton Cowperthwaite), who is having sex with both Bette and party-hearty Shane (Brennan Clost), has a beef with Cassie’s old dance partner, Nabil (Michael Hsu Rosen). He also has a pretty severe eating disorder. Shane, for his part, seems to be the only one at the school who’s supportive of Neveah, telling her that not fitting the mold “is a good thing, and it always has been.”

At a fundraising party, Dubois pledges that the next ballet in which the students perform will be choreographed by Ramon Costa (Bayardo De Murguia), who is seeing Delia and is getting anonymous threatening texts right before the surprise announcement. Ramon doesn’t want to do the show, but Dubois convinces him. When he sees Naveah dance, he decides to make the ballet a new production about Jack The Ripper.

Tiny Pretty Things is based on a book by Sona Charaipotra and Dhonielle Clayton; the series was created by Michael MacLennan (Bomb Girls). We know it’s supposed to come off like a CW-ish or Freeform-ish YA show, with multiple storylines and lots of rivalries and controversies. But while we were watching the first episode, all we could do is shrug at the show’s soapiness. Even though the stakes are high for the individual characters, they’re fairly low for the entire series. Who gets to be principal dancer? Who gets the training they need? Will Naveah make it or burn out? Who really cares?

It might be because the show is so overstuffed with characters and storylines, it became difficult to figure out who was who and what their story was. It was especially confusing among the boys; except for the blond Shane, it feels like Oren and the other dark-haired dancers are interchangeable. So when we see Oren sleeping with Bette — with his roomie Shane running interference with strict RA Torri (Jessica Fuller) — then see him sleeping with Shane and admiring his V-cut, we had to check ourselves a bit to see if it was the same guy. It could be that, aside from Shane, the boys didn’t get much story to latch onto making them fairly generic.

But there’s so much going on, it was hard to keep track of anything. Officer Gomez is acting like a detective and digging into this case because she recently lost her wife and can’t get over it. The threats Ramon is getting might be related to Cassie’s accident or they may not.

Oh, and there’s also the fact that Cassie isn’t actually dead. She’s in a coma, struggling to survive. She’s the voice that narrates the first episode, commenting on the “corps” of dancers that hate each other but have to rely on each other. But we’re not sure if the school knows that Cassie is alive or not, or if they really care.