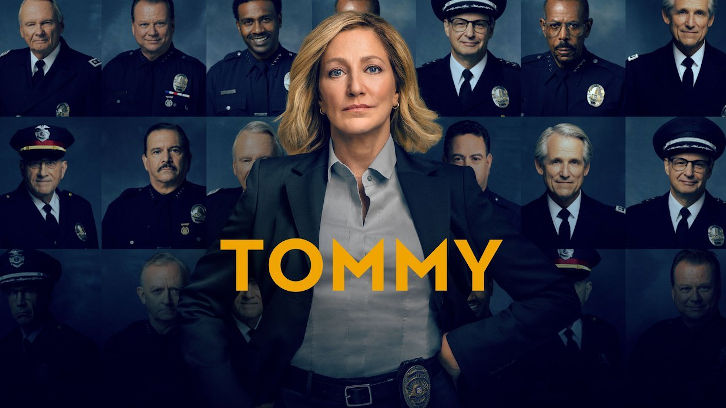 It’s early February and we’re already up to our second broadcast drama about an unlikely candidate elevated to lead Los Angeles law enforcement, with both shows using the same conflict — the threat of ICE encroaching on local authorities — to illustrate that our main characters may be authoritarian, but they’re authoritarian with an empathetic edge!

Who says there are no new ideas in Hollywood?

CBS’ drama Tommy, about the first female head of the LAPD, is at least better than Fox’s Deputy, about the first Stephen Dorff to become LA County Sheriff, but that’s mostly by virtue of an above-average pilot, which is followed by two episodes that render the initially distinctive series bland and, despite a very good ensemble cast, oddly robotic.

Tommy stars Edie Falco as Abigail “Tommy” Thomas a New York-raised cop recruited by Mayor Buddy Gray (Thomas “Not Tommy” Sadoski) to run the LAPD after the department finds itself embroiled in a series of unseemly sex-related scandals. Because she’s both a woman and a lesbian, as she repeats ad nauseam throughout the pilot, Tommy is seen as a good candidate to deflect criticisms, which doesn’t mean that she isn’t facing a force that is, at best, skeptical of her credentials and intentions.

In her corner, Tommy has PR wizard Blake (Adelaide Clemens), trusty speechwriter Ken (Michael Chernus), crusty deputy Donn (Russell G. Jones) and sharp-dressing driver Abner (Vladimir Caamaño). Working against her are countless character actors whose collective direction seems to have been, “More stink-eye.” Adding pressure to her time in the City of Angels is long-estranged daughter Kate (Olivia Lucy Phillip), who blames Tommy for tearing their family apart or choosing her job over her family or something.

The pilot for Tommy was written by Paul Attanasio and directed by Kate Dennis and as much as it overplays some of its quirky cards, it’s full of distinctive and interesting introductions for its characters and fueled by a dark sense of humor. The humor doesn’t always work, especially when dealing with the ridiculous avalanche of charges against Tommy’s predecessor and other cops in the department, which might not have been intended to be funny, but play that way because Sadoski’s greatest gift is extraordinary wryness.

Falco flexes her own ample comic muscles in a way that makes Tommy likable even as other characters are listing her various flaws, and Cooper, Caamaño and Clemens make solid first impressions. The LAPD/ICE plotline is by-the-numbers, but goes in one or two disturbing and unexpected directions and Dennis ties it all together and smooths over a bevy of cliches with a textured treatment of Los Angeles.

Now Attanasio is far from infallible — he wrote the ludicrous pilot for CBS’ ludicrous Bull — but the Homicide and House creator is generally a superb pilot scribe provided that he’s able to hand the reins over to showrunners who can maintain that momentum.

The momentum here is woefully unmaintained. The second episode, written by Tom Szentgyorgyi and directed by P.J. Pesce, has been retrofitted into the most generic of CBS hourlongs. While Szentgyorgyi has a little of that on his résumé with The Mentalist (far from the most generic of CBS procedurals), he has also worked on far better shows like Journeyman and Bates Motel, so it’s unclear how all of the edge to these characters was sanded off in a single episode.

Falco still thrusts her chin out determinedly and furrows her brow aggressively at the rot in the LAPD, but she’s just become another CBS hero confused by the Internet, oblivious to what the youth are up to and exasperated that nobody will let her just fight crime. The episode is generally overlit, poorly paced and the tonal calibration is so off that a climactic scene involving a shocking act of prison violence made me snort with laughter that absolutely, positively, 100 percent was not intended.

The third episode represents a bit of a bounce back. It’s a very simplistic Hollywood #MeToo episode and lets Tommy settle into being something of a successor to Madam Secretary, with its nonconfrontational procedural elements and cast of actors who I wish weren’t tied down to a nonconfrontational CBS procedural. In that category, you have Falco, at least better here than she was in Dick Wolf’s silly Menendez miniseries, and Sadoski and especially Clemens, who should have been given every opportunity at stardom after her subtle work in Rectify.

The nonconfrontational perspective means that even when Tommy pretends it has something to say, it ends up saying it in the least offensive way possible or at least positioning the adversarial characters as so cartoonish that you commit to whatever Tommy’s ideology is almost by default. I’ve seen online comments from conservatives who charged Deputy with being liberal propaganda just because it suggested that immigrant and refugee communities are better off if they’re able to report crimes, so I’m sure Tommy will fall victim to the same canards, but once you get past that, the show doesn’t go after any ideas more controversial than “Sexual assault is bad” and “Cops should be able to get mental health services if they require.” Fair enough.

After the pilot, I was prepared to be enthusiastic about CBS having landed an above-average version of a very CBS-y show. After the second episode, I was prepared to savage the show. And after three? It’s just another mediocre broadcast show that probably could have been a lot better.