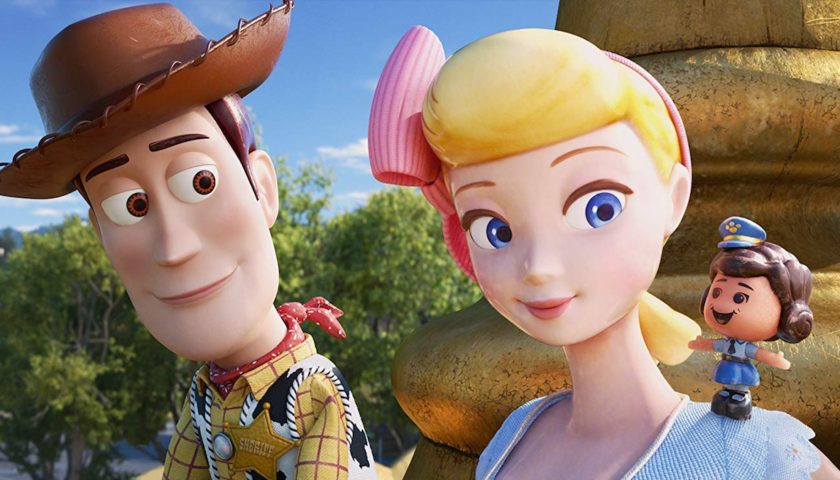 Review: The number 4 typically doesn’t bode well for film franchises, which understandably has quite a few “Toy Story” fans feeling nervous. When it comes to constructing dramatic arcs across multiple movies, trilogies seem to offer a natural cycle, after which creatives must decide whether to reinvent (see “Fast & Furious,” “Mad Max: Fury Road”) or carry on toward Episodes 5, 6 and 7, hoping not to derail things in the process (à la “Superman IV: The Quest for Peace” and “Jaws: The Revenge”).

Those are the stakes facing “Toy Story 4,” but this is Pixar we’re talking about — a place where follow-ups level up — and this series’ quaternary installment adds so much that audiences will find it hard to imagine the saga without it. After all, Pixar is the kind of studio that so believes in doing right by its properties, it scrapped Disney’s slapdash direct-to-video plans for “Toy Story 2” in order to make a theatrical sequel that surpassed the original. A decade later, “Toy Story 3” further expanded on the fundamental questions of what it means to be a toy, ending with an unforgettably emotional scene in which college-bound Andy passed his playthings on to a new child, Bonnie.

For many, the exploits of Woody (Tom Hanks) and Buzz Lightyear (Tim Allen) ought to have ended there. This is no cash-grab continuation, however, but an organic and intuitive new chapter that enriches our understanding of the characters, offering a different and more satisfying kind of closure for their collective journeys — which involve Bonnie’s first day of kindergarten, a family road trip and the discovery of an antiques shop where sad old toys hope for a second chance.

Meanwhile, for those of us who had misgivings about the previous film, director Josh Cooley (taking over for John Lasseter after he left Pixar amid sexual harassment charges) has delivered the movie “Toy Story 3” should have been. Narratively speaking, that film ended where it ought to have begun, wasting too much of its running time on comedic shenanigans in an unnecessarily sinister day care. As in Margery Williams’ classic “The Velveteen Rabbit” — or that one gray night it happened, in “Puff the Magic Dragon,” when Jackie Paper came no more — it was inevitable that Buzz and Woody’s owner would eventually outgrow them, and yet Andy’s farewell felt like a cheat, considering the toys had been accidentally thrown away (and nearly incinerated) in that film.

Simultaneously deeper and more artistic, “Toy Story 4” opens with the concept of how such plush and plastic companions adjust to the idea that their duty to their original child might be done. That’s a lesson Bo Peep (Annie Potts) — the porcelain lamp belonging to Andy’s sister, Molly, who was donated nine years earlier — seems to comprehend during a flashback in which she tells Woody by way of farewell, “It’s time for the next kid.” The third film (from which Bo was missing) skipped over this wrenching separation, which is included here as dramatic setup for an unexpected reunion, wherein Woody stumbles on his old love interest and must decide which way his conscience will point him from here.

The brilliance of all the “Toy Story” films lies in the characters’ repeated demonstrations of loyalty and responsibility — to their owners and to one another — and the way they juggle that with their almost-human emotions. Woody has a “Leave no toy behind” policy (fitting for the actor who saved Private Ryan), reiterated early on via a daring nighttime rescue in which the pull-string cowboy saves RC when the car is left in the yard during a storm.

Kids lose toys all the time, we’re reminded, and yet Woody’s above-and-beyond impulse is an extension of the trait that led him to save Buzz from vicious neighbor Sid all those years ago. Now it extends to a new addition: Forky, a plastic spork that Bonnie transforms into an original plaything. On her first day of kindergarten, Bonnie literally “makes” a friend with the addition of pipe-cleaner arms, popsicle-stick feet and googly eyes, all ingredients repurposed from the trash bin and held together with clay.

A nearly brainless noob voiced with just the right mixture of naiveté and awe by “Arrested Development” star Tony Hale, Forky is fundamentally different from the new toys we’ve met before (remember how Buzz, who thought he was the real Space Ranger, had to be convinced, “You are a toy!”): This Frankensteined ex-eating utensil has no interest in Bonnie’s happiness but instead longs to return to the trash — which makes for a delightful montage, set to a Randy Newman ditty, “I Can’t Let You Throw Yourself Away,” wherein Woody repeatedly intercepts Forky’s tireless suicide attempts. (Who better than a spork to suffer an identity crisis: Is he a fork, or is he a spoon?) But what this control-freak cowboy’s really doing, Forky eventually realizes, is refusing to admit that he, too, might be trash.

And so “Toy Story 4” revisits the existential questions that arise when a toy outlives its usefulness, or when its utility changes — as in the second film, when Woody is coveted by an adult collector. Screenwriters Andrew Stanton and Stephany Folsom imagine a variation on that situation here, when Forky and Woody, who break away from the gang during a road trip to Grand Basin National Park, take an ill-advised detour through an antiques store displaying Bo Peep’s lamp stand in the window.

This strange wonderland, crowded with cobwebs and bric-a-brac of all kinds, is overseen by Gabby Gabby (Christina Hendricks), a vintage pull-string doll obsessed with finding a replacement for her broken voice box … just like the one sewn into Woody’s torso. Here, once again, Pixar gives us the idea of malicious toys — an idea that, in theory, might be better left to the “Annabelle” movies but works in this context because it offers fresh angles on the experience Woody has taken for granted: being treated as one child’s favorite for so long. (Another new addition, the Keanu Reeves-voiced Canadian daredevil biker Duke Caboom, endears through his own sense of failure, discarded after being unable to perform the tricks for which he was advertised.)

If the first movie demonstrated the extremes to which toys might be exposed — contrasting the heaven of Andy’s room with the hell Sid puts them through — then this installment explores the idea of purgatory: What’s it like for a plaything to be ignored, overlooked or entirely unused? And to the extent that these characters have free will, at what point is it reasonable for them to privilege their own happiness above that of their owners?

While Woody steers by his conscience, Buzz is confused by the concept, and mistakes his “inner voice” for the preprogrammed recordings that play when he pushes his own buttons. These messages amusingly lead Buzz on a mission, during which he meets a pair of loudmouthed carnival prizes — conjoined plushies Bunny (Jordan Peele) and Ducky (Keegan-Michael Key) — and the Polly Pocket-like mini-toy Giggle McDimples (Ally Maki), who offer assistance and no shortage of comic relief on a parallel adventure. Whatever Buzz and Woody may think, the newly liberated Bo Peep doesn’t need saving. She’s quite happy with her life as a “lost toy,” and can defend herself well (with her Bo staff, of course), making her the latest of Disney’s empowered heroines. (In another progressive detail, two women can be seen hugging a child at Bonnie’s kindergarten orientation.)

It’s been nearly a quarter-century since the original “Toy Story” — and longer still since John Lasseter’s “Tin Toy” short, whose wind-up hero makes a cameo here — and the tone of animated features has changed drastically in that time. Whereas Pixar movies have consistently put their trust in earnest emotions, other studios poke fun at such sentimentality, from the sarcasm of “Shrek” to the wink-wink self-awareness of “The Lego Movie.” Those are effective approaches, too, but considerably less risky than the sincerity Cooley embraces here. It’s refreshing to see the studio stay true to the reality it created for these characters, continuing to depict these toys as kids imagine them: imbued with the souls and feelings of human beings.

Whereas Pinocchio wished to be a real boy and the Velveteen Rabbit was transformed into an actual bunny at the end of its tale, Buzz and Woody and the gang are destined to be toys forever. But the difference here is that they now have a choice about their fates. For much of the film, we see Woody behaving as a kind of parental figure to Bonnie, looking out for her well-being, even though she’s left him in the closet to collect dust bunnies. Compare that with the selfish cowboy who overreacted when Buzz Lightyear landed in Andy’s room, and you realize how much he’s matured in that time.

So, too, has the technology Pixar has at its disposal, and “Toy Story 4” takes astonishing advantage of the studio’s rendering capabilities. The first of these movies to be composed in widescreen, Cooley’s feature debut is by far the most cinematic of the series, doing incredible things with lighting, from the sparkling, rain-drenched driveway of the opening scene to the film’s breathtaking carnival-roof finale. Though practically photoreal in so many details, this latest installment couldn’t quite pass for live-action — but then, why would it want to? “Toy Story” ushered in the era of computer-animated cartoon features, and the fourth movie wraps up the saga beautifully. At least, for now.