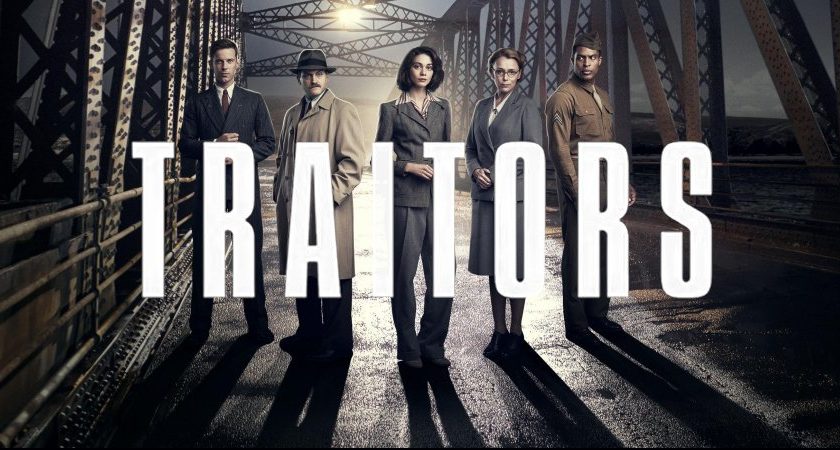 feef’s unique perspective on civil service gets her a job at the ministry of housing, doing boring studies about which kind of wood should be used to rebuild the bombed out towns around the U.K. But Peter has something more in mind for her; he’s part of the secretive Office of Secret Services (OSS) and he tells his boss, an aggressive agent named Rowe (Michael Stuhlbarg), that she’d be perfect to spy on her own government, whom Stuhlbarg is convinced is ripe for a Communist infiltration. It helps that her politics lean towards the Tory side, and she’s appalled that the Labour party — who Tories consider to be socialists — are likely going to gain the majority in Parliament and force Winston Churchill out of the PM’s office.

She gets especially annoyed at Hugh Fenton (Luke Treadway) a solicitor who is working for her conservative father, and plans to run for the House of Commons as a Labour party candidate. He won’t skinny dip with her after the dinner where they’re introduced, and when they run into each other in London, they both seem to be irritated and attracted to each other by their opposite political views. Rowe finds out about this and tells Feef to be more friendly with him going forward.

Rowe gets a complication; with the virtual end of the Pacific theater, President Truman is going to scale back OSS’s London office and cancelling their operations. Rowe is determined not to let his new asset go, so he goes rogue, with some private help. He takes over supervising Feef, with Peter mysteriously out of the picture. He tells Feef to try to get herself transferred to the Cabinet Office to get even further inside the government.

Traitors, produced for Netflix and UK’s Channel 4, should be better than it is, given its cast and pedigree. Bathsheba “Bash” Doran (Boardwalk Empire, The Looming Tower) created and wrote the series, and it explores an aspect of post-WWII England that we haven’t heard a ton about, which is the socialist bent that the country’s government had right after the war, and the paranoia the U.S. had that those socialists will be influenced by Russia. Sounds a bit familiar, doesn’t it? Anyway, it’s also an interesting insight into the OSS, which is more or less a predecessor of today’s CIA.

But the first episode is muddled and is oddly paced. We’re not quite sure how Feef and Hugh are put in each other’s orbit, because Hugh’s connection to her family is barely explained. We’re also not sure what kind of secret agent work she’s being trained for, given that we’re first seeing her at the end of the war. Did she think she was going to be able to spy while working in civil service? Was there some sort of transfer of skills we’re not thinking about?

Then there’s Rowe. Stuhlbarg plays him as a clenched fist, more paranoid about communists than Joseph McCarthy was during that postwar era. More than once, he emphasizes to Feef or Peter that they’re in a new war, just as the old war was coming to an end, and goes off on a speech to Feef about the violence and rape that the Russian army inflicted on their march towards Germany. Once he goes rogue, he feels like a character that’s going to go Captain Queeg, trying to eliminate everyone who gets in his way. Most of the episode just felt uneasy in that way, showing a heightened view of what American’s fear of Communism was like back then. It likely was right on the money, but showing the Americans as bloodthirsty Red hunters just felt like low-hanging fruit to us.