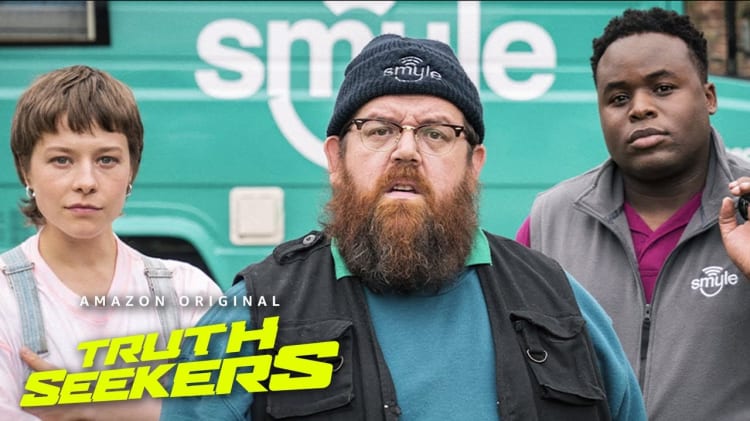 Simon Pegg and Nick Frost are back at it again with Truth Seekers, a new horror comedy series for Amazon Prime. Pegg and Frost are real-life best friends and the writing duo behind horror comedy classics like Shaun of the Dead and The World’s End, in which they’re well-known for effortlessly blending horror with comedy and science fiction.

The first look at the trailer for Truth Seekers was revealed in a panel at the 2020 San Diego Comic Con, in which Simon Pegg and Nick Frost appeared alongside co-writers/co-creators James Serafinowicz and Nat Saunders. The initial eight-episode series will follow main character Gus (Nick Frost), who is a broadband installer by day and internet ghost hunter by night.

Truth Seekers will star Simon Pegg and Nick Frost, alongside Emma D’Arcy (Misbehaviour), Samson Kayo (Timewasters), Malcolm McDowell (A Clockwork Orange), Susie Wokoma (Year of the Rabbit), and Julian Barratt (The Mighty Boosh). Here’s everything we know about the upcoming show so far.

Truth Seekers was first announced in January 2018, as the first television production from Stolen Picture, Nick Frost and Simon Pegg’s production company. The series was described as a half-hour comedy-horror series about a three-person paranormal investigation team. Then, in August 2019, Amazon Prime Video signed a full series order for Truth Seekers, giving it exclusive access to the series.

In terms of the production of the series, the creators wanted to deliver an old school horror effect, utilizing lenses used on classic movies, Return of the Jedi and Raiders of the Lost Ark, and focusing on practical effects over CGI. Director Jim Field Smith and the creators also made a point to use real abandoned and potentially haunted buildings as filming locations in order to deliver more realistic horror. Though the series creators were quite tight-lipped about the exact release date, they did say that Truth Seekers will debut sometime in autumn of 2020, so fans only have a few more months to wait at most.

The idea for Truth Seekers comes from Nick Frost and Serafinowicz’s shared love of the paranormal. In the SDCC panel, Serafinowicz explains that he and Frost have always loved the supernatural and often text each other links to paranormal articles they find around the internet. “We just thought, how could we kinda harness our obsession with all of the paranormal in a show?” Nick Frost went on to explain that he and Simon Pegg used to go ghost hunting quite often, and that their shared love of The X-Files offered significant inspiration for the series.