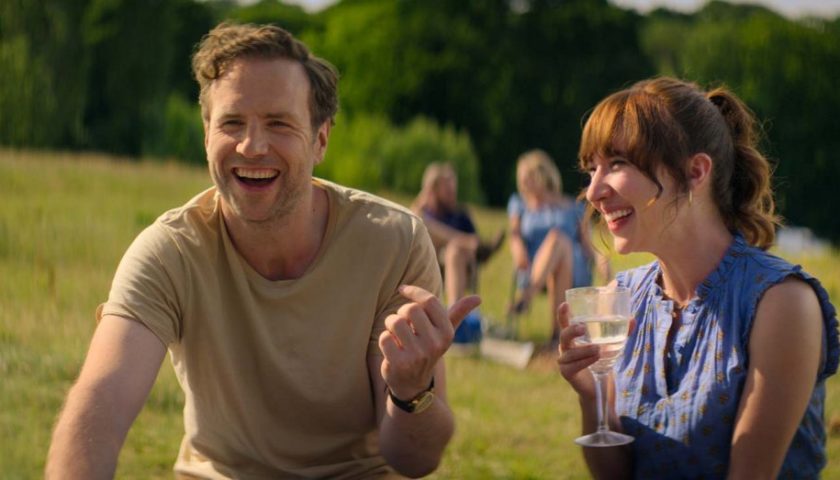 I never trust a TV show that opens on a sex scene. It happens more often than you expect and nearly always comes off as a mark of writerly insecurity. Are producers really so unsure of their material’s strength that they figure starting off on a literal bang will titillate audiences into submission? Do they really think a bit of immediate shock will differentiate their work from all the other dull little shows out there?

Apple TV+’s twee adoption rom-com Trying starts off with some impromptu public transit sex when live wire Nikki (Esther Smith) anxiously realizes she’s mistimed her ovulation schedule and needs a little help from her more staid partner Jason (Rafe Spall). Without removing an ounce of clothing, Nikki hops into Jason’s lap, unzips his fly and bops around for a few seconds while the mostly empty bus hums across the city. The moment serves to demonstrate just how quirky/horny/spontaneous this couple is while also introducing us to the central obstacle of their lives: their infertility.

Trying is sensitive and raw when it’s not striving so hard to be sexy-cute. Inspired by — and an inverse of — the charmingly vulgar parenting comedy Catastrophe, about strangers who fall into a relationship after accidental insemination, this London-set sadcom invites us into the lives of an unmarried working-class couple who decide to pursue adoption after an expensive and futile round of IVF. (Yes, we Millennials are now old enough to have our own infertility comedies.)

The show is disarmingly original in concept, its eight-episode first season committed to the grueling true-to-life intricacies of these proceedings, from applications and home evaluations to training classes and interview panels. Adoption storylines are often relegated to minor tear-jerking arcs on family soaps like Parenthood and This Is Us, and mostly feature the complications after a child enters the new parents’ lives. Thus, it’s indeed refreshing to see the arduous preparations finally take center stage, and with a light touch.

At its best, Trying candidly lays bare the emotional filigree of failing to conceive a child and choosing to devote your life to a tiny stranger. At its worst, it yokes us to two unlikable people who grind you down with their endless neuroses.

Nikki is the reality behind a Manic Pixie Dream Girl — sure, she’s bijou and zany and eats noodles with her fingers because she cannot work chopsticks. But she’s also steeped in anxiety, which manifests through her envy at other people’s college degrees and high-level jobs that she thinks are much more impressive than her call-center gig at a rental car company.

Nikki and Jason started dating when he was still with his ex, which provides them a craggy foundation, especially as cowardly Jason has a penchant for flirting with other women behind Nikki’s back. She’s desperate for a child and he’s desperate to please her, so at the end of the pilot they decide to submit themselves to the invasive adoption process.

Trying best succeeds when it confronts the class problem of Nikki and Jason’s new endeavor. Unlike the bougie, affluent wannabe parents they meet in their adoption training classes, they both feel stuck in roles that were more suited for the beginning of their careers than the middle. A running joke is that folks can’t believe Jason still teaches ESL to adults, a job his peers associate with spiritually lost post-grads. (Presumably, the Great Recession dislodged their goals when they were in their early 20s.)

Even the fact that they rent their flat makes them feel they’re at a significant disadvantage for approval compared to others seeking to adopt, and Nikki in particular feels the pressure to feign respectability. This leads Trying to its sitcom hijinks-y low points, which include the couple accidentally mailing a list of their flaws to the adoption council, Nikki signing them up for ivory tower lectures in which they have zero interest and the pair hurriedly fixing up their apartment while hung over during a classic case of “Oops, the social worker’s here for a surprise inspection!”

That social worker, played by a fizzy Imelda Staunton, turns out to be a highlight of the series. Far from stuffy, she immediately sees through Nikki and Jason’s ruse and advises them to stop pretending to be like “those people” — “those people” being the picture-perfect posh folks who furnish their nursery with wooden dollhouses. Instead, she wants them to be more like the parents who buy Barbie’s Rainbow Castle. “That’s not who the kids are. They don’t grow up in houses with quinoa and rocking horses. You know, we rip them out of their lives and move them two miles away and it might as well be the other side of the world.”

Playing an eccentric and plainspoken civil servant with more than 30 years’ experience, Staunton practically sprinkles magic fairy-godmother glitter around every scene she’s in, all the while believably centering her character in the underlying pain of children who need homes.

Trying isn’t as funny as it ought to be, nor does it completely sell the conceit that Nikki and Jason would be ideal parents precisely because of their childlike immaturity. (One of my screening notes included the comment “disgustingly sincere,” which probably tells you more about me, however, than the show itself.) Nikki spends a lot of screen time staring wistfully at children, but she rarely verbalizes why raising a child is so vital for her. In fact, the doubts Jason expresses about her emotional stability seem more apt than Nikki’s own successful arguments for their parental competency. Cue the cutesy strumming-and-whistling score.