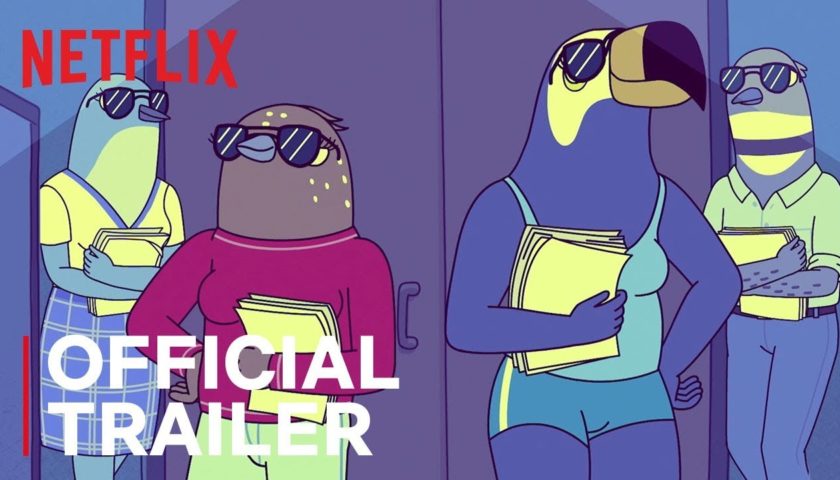 Review: Netflix has released the trailer for its new animated comedy series “Tuca & Bertie.” The series stars Tiffany Haddish and Ali Wong as two 30 year-old bird women who form a friendship after living in the same apartment building. Lisa Hanawalt (“BoJack Horseman”) created the series and serves as an executive producer alongside Raphael Bob-Waksberg, Noel Bright, Steven A. Cohen, and Haddish and Wong. Guest performers include Nicole Byer, Richard E. Grant, and Tig Notaro among more.

Season 2 of “Strange Angel” will premiere on CBS Access on Thursday, June 13. The series, based off of George Pendle’s book of the same name, depicts the true story of Jack Parsons who during the 1930s straddled the world of pioneering science and sex magick. The period-drama, directed by Mark Heyman (“Black Swan,” “The Skeleton Twins”), stars Jack Reynor, Rupert Friendm and Bella Heathcote, with Angus Macfadyen joining the cast for Season 2.

Comedy Central has announced that its new sketch series “Alternatino with Arturo Castro” will premiere on June 18. The series will follow Castro, best known for his roles on “Broad City” and “Narcos,” as he acts out a variety of sketches that touch on subjects such as politics, puberty, sex, and dating Youtube has moved up the release of Season 2 of “Cobra Kai” on April 24. The streaming service will release all 10 episodes of the series, based on “The Karate Kid” films,  on Youtube Premium at 12:01 am ET on April 24 rather than at 12 p.m. as originally planned. The first episode will be free for non-premium viewers.

Samantha Soule will guest star in three episodes of  Showtime’supcoming series “City on a Hill.” Soule, best known for her role on “Godless,” will play a muckraking reporter for a local newspaper in Boston where much of the crime show is based. Dean Winters(“30 Rock,” “Oz”) will join Soule as a guest star in one episode of the series, in which he’ll play a Vietnam vet and the brother of Scott Hook. The series, starring Kevin Bacon and Aldis Hodge, will premiere on Sunday, June 16.

Lisa Linke has landed a guest role on the new Netflix show “AJ & The Queen” playing spunky insurance girl, Melissa. The series, executive produced byMichael Patrick Kingand starring RuPaul, follows Ruby Red, a drag queen traveling across America who meets an unlikely sidekick named AJ. Linke has been seen in her role as Kimberly in the webseries “Successful People” and her recurring role on “Teachers.”