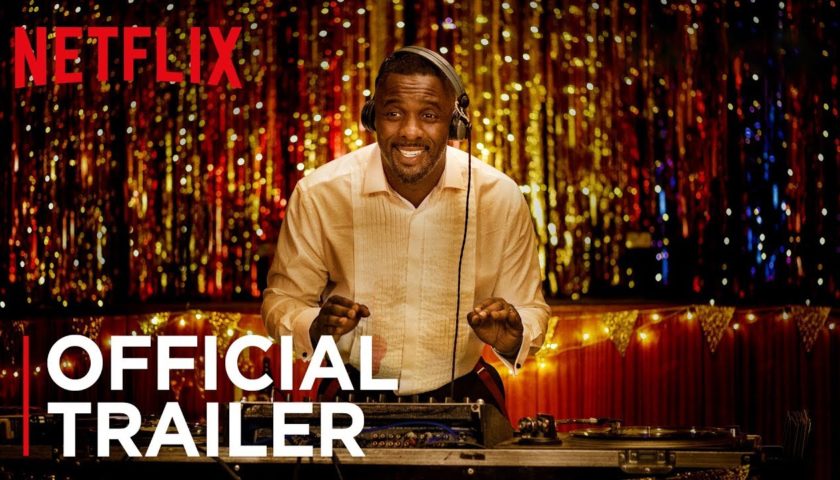 Review: Washed up, ageing DJ Charlie is a perennial bachelor living the low life. Clinging on to past glories he lives with his auntie and cousin and makes his living DJ-ing unenthusiastic weddings. All that changes for him when his childhood best friend and now Hollywood actor moves back to London with his superstar DJ wife and their daughter. Looking for someone reliable, the family make Charlie their nanny in exchange for one last chance at the big time.

It is nice to see Idris Elba stretch himself and doing something outside of the big budget Hollywood movie or prestige TV drama for which he is known. He lends not only his credibility but also his formidable star power and charisma to this charming comedy. It therefore comes as a pleasant surprise just how grounded and subtle his performance is. You totally believe Charlie as washed up, but Elba also makes him incredibly likable and charming. In less assured hands Charlie could easily have ended up as a horrible cliché.

In addition to Elba, the performance of young Frankie Hervey is crucial. When in a show like this a character is required to go through a journey of self-discovery because they are thrown together with a precocious child, the success or failure of the show tends to hinge on how likeable the central child is, and Hervey delivers a charming performance that has the requisite precociousness without being too smug. Both Charlie and Gabby are good for each other and it is one of the delights of the show that they play so well off one another.

The comedy is smart and well written. The jokes are there to support the story without feeling crowbarred in. Much of the humour tends to come from the interplay between Charlie and smart-mouthed Gabby, and Charlie and his doofus-like cousin Del, played by Guz Khan (Man Like Mobeen, Curfew). It would be easy to fall into hackneyed and cliched gags about the famous friends or Charlie’s family, or even the garage music scene where Charlie made his name, and the show does a good job of steering clear of these. The writers do mine each of these areas for humour but don’t overplay their hand and keep the jokes affectionate and warm without making it too cheesy.

This show comes with some serious comedy pedigree with direction from Tristram Shapeero (Absolutely Fabulous, Unbreakable Kimmy Schmitt); and it shows. Turn Up Charlie feels like a modern American sitcom fused with a UK setting and sensibility; something that I didn’t realise I was missing until I saw it.

Occasionally the storyline is a little ramble-y. The relationship that Charlie has with his childhood best friend David is, for example, a little uneven. It feels as though the writers initially saw David one way and then changed their minds and wrote him another; neither direction is especially wrong, it just feels a touch jarring the way that the change takes place across the 8-episode run.

Turn Up Charlie is smart, warm and full of relatable performances. Idris Elba shows us a new side of himself and I couldn’t get enough of this series.