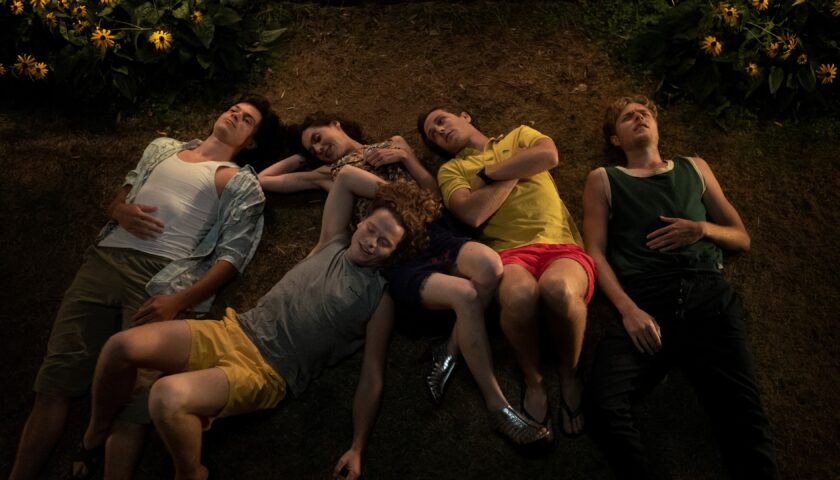 The video that Peter Van Gael (Tom Vermeir) is watching is from 1992, where his younger self (Lukas Bulteel) and his friend Mark (Felix Meyer) are taking advantage of their friend Sophie Geboers (Louise Bergez) while she’s passed out. If he doesn’t pay a certain amount in Bitcoin, the video will be released soon after the reunion he and his wife Romée (An Miller) are hosting on a private island off the cost of France.

Both were members of a group of friends who spent summers at an estate in Zandhoven, Belgium, in the early ’90s. The rest of the group meet in Antwerp to get over to the island: Sophie (Inge Paulussen) is together with Didier Verpoorten (Herwig Ilegems), who likes to brag about his flight attendant job. Luk Van Gael (Kevin Janssens) has brought his younger girlfriend Lia (Sanne-Samina Hanssen) along. He shares custody of an adult special-needs son with his ex-wife Saskia Van Dessel (Ruth Becquart), who was also in the group. Finally, Stef Van Gompel (Koen De Bouw), a government minister who was derisively given the nickname “Mowgli” by the group due to his scruffy wardrobe when he was younger, arrives.

The first one Peter informs about the video is Mowgli, since his younger self (Vincent Van Sande) was behind the camera making that video; both wonder who had it, considering they destroyed the tape back then. The two of them determine that someone on the island is the blackmailer, and they’re determined to figure out who it is. It also turns out that the younger Didier (Bjarne Devolder) was also there, something he’s never revealed to Sophie.

We also find out in the 1992 flashbacks was that Luk (Tijmen Govaerts) was recovering from cancer or some other serious illness. Mark, who got in a fight with Peter after the incident — Peter called him a freeloader, essentially — also seemingly perished when the house caught fire the night after the video was made. At the very least, that’s what the group thinks, as we see Peter and others trying to get to Mark’s room, only to be blocked by the flames.

What we’ve found with shows that cover two timelines in order to show what secret the current-day group might not want to have revealed is that one of the timelines gets short shrift. The characters are generally more well-defined in one timeline over the other, and the overall show suffers.

In Two Summers, it seems like the 1992 timeline is the one that has the more one-dimensional characters, at least at first. We don’t get a super-solid handle on just who young Saskia (Tine Roggeman) and Romée (Marieke Anthoni) are, for instance, and the two of them seem to be interchangeable in that first episode. Actually, if Sophie wasn’t the victim, she would be equally indistinguishable from the other two female friends.

Considering the show is about a sexual assault some members of the group perpetrated on one of the others, writers Paul Baeten Gronda and Tom Lenaerts should have spread the characterizations around more. But it certainly looks like we get more personal insight into the younger version of the men than of the women.

We should give the writers credit, though: By the end of the first episode, we’re able to link the younger and older versions of each character, though we’re scratching our heads about just what age range they were in during the 1992 timeline. Why do we think that? It’s because the actors playing the older versions seem to range from their early 40s to their early 60s, yet the younger versions all look to be either college students or recent college grads. There’s not enough plausible aging people up or down to cover such a large gap, and it breaks some of the credibility when we link the younger and older versions of each character.

What we would also like to see going forward is Sophie’s perspective, especially when she’s older. Does she remember the attack? If so, how much? And does she know that Didier was in the room as it happened? That perspective will also round out the story a bit, so it’s not just a bunch of d-bag guys trying to keep their heinous act a secret.