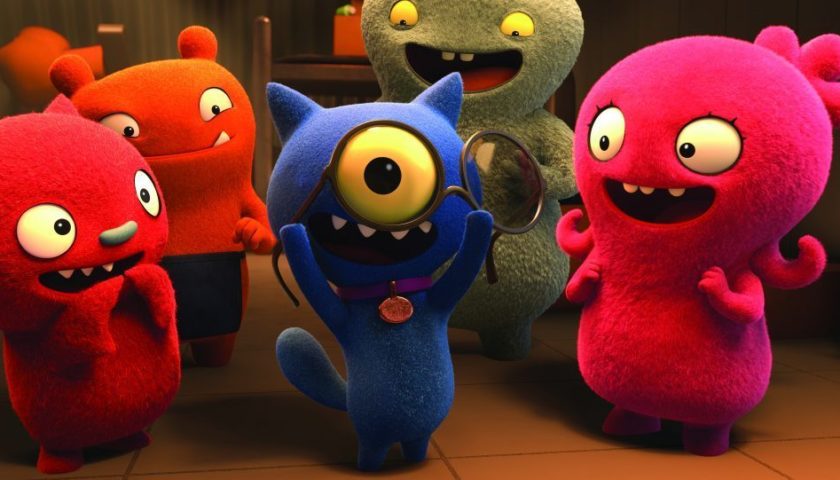 Review: In “UglyDolls,” an air-popped animated musical fairy tale about learning to embrace the ugly — that is, ordinary (that is, extraordinary) — specimen most of us are, the title plush toys are monochromatic fuzzy-felt factory rejects who get tossed off the assembly line for one reason or another. Each has a flaw that fails to meet the corporate standards of eye-pleasing symmetry and cuddliness. Moxy (voiced by Kelly Clarkson), the movie’s heroine, is a rambunctious blob of pinkness whose problem is her teeth (she’s got three, unevenly spaced, with a prominent gap). Ox (Blake Shelton), a rabbity green customer, has an X where his left eye should be — though at least he’s meant to have another eye. Ugly Dog (Pitbull), a cyclops canine mascot, has one glaring yellow peeper at the center of his forehead. And Wage, voiced by Wanda Sykes, sports two ungainly lower incisors, an homage, I assume, to the gargoyle voiced by Sykes on Disney Junior’s “Vampirina.”

The Ugly Dolls, in their just-ugly-enough-to-be-an-individual way, are no one’s idea of a perfect seamless prototype. But you couldn’t say the same thing for the movie. It’s based on an insanely popular line of plush toys launched in 2001, and in the years since there have been any number of kiddie film franchises that this one studiously imitates. The main one (which predates the launch) is “Toy Story” and its sequels. The characters in “UglyDolls” live in Uglyville, a Dogpatch-meets-Whoville shantytown for stuffie rejects, where most of the dolls accept their outcast fate. But Moxy has never relinquished her dream of going to the Big World and becoming the cherished plaything of a human child; that, and only that, will complete her. It’s a desire that couldn’t be a more direct echo of Tom Hanks’ Woody and his eager, loving, but needy relationship to the kid he belongs to.

“UglyDolls” is “Toy Story” meets “Trolls” meets “The Smurfs” meets the Island of Misfit Toys. The “Trolls” connection is particularly telling. The whole notion of making the film into a spangly dance-pop musical in rainbow colors, with prominent music stars as the leads (in this case, Clarkson and Nick Jonas — in “Trolls,” it was Justin Timberlake), feels liberally borrowed from that movie. And even more than that, “Trolls,” one of the most splendid animated features of the last decade, had its own far more visually (and emotionally) sophisticated version of the Ugly Dolls: Prince Gristle and Bridget, the buck-toothed Bergens-in-love voiced by Christopher Mintz-Plasse and Zooey Deschanel. “UglyDolls” is “Trolls Lite,” and the way things work I have no doubt we’ll be seeing a movie in the next few years that’s “UglyDolls Lite.”

Yet this is still a winsomely appealing and joke-happy bauble for kiddies. Recently, catching up with “Missing Link,” I thought: It’s not badly done, but what small child wants to identify with a crusty frowning British adventurer like the hero of that film? “UglyDolls,” apart from the knowingly two-dimensional punk charm of its title toys, has been staged as a playground with moving parts. It’s the first animated feature produced by STX’s Family division, and the director, Kelly Asbury, coming off mediocrities like “Gnomeo & Juliet” and “Smurfs: The Lost Village,” here adopts a looser, funkier attitude. The movie isn’t aiming too far over the heads of 5-year-olds (and God knows, it’s not Pixar or the Spider-Verse), but for what it is, it works.

Five of the Ugly Dolls make it through a portal, but where they land isn’t the Big World. It’s the Institute of Perfection, a kind of Ayn Rand academy for finely chiseled tailored dolls with pinpoint noses to learn how to be the flawless specimens they think they were meant to be. At least, that’s the philosophy of the doll who rules the place. His name is Lou, and as voiced by Nick Jonas he’s a terrific contradiction: a pop-star guru who’s really a dictator, and an icon of standardized beauty who has more self-doubt than he lets on. The film’s best visual flourish is Lou’s hair: It’s a honey-er shade of pale, with each golden strand falling, like a perfectly cooked piece of pasta, into a pompadour from heaven. But Lou’s outfit — a preppie suit with handkerchief — is enough to tell you that he’s not to be trusted. Everything about the Institute of Perfection is uniform, down to the parochial-school dresses that the female dolls (including a trio of mean girls) wear.

The satire, even on a kiddie level, could have been a touch more biting. You wish that the filmmakers, in smiting overly fetishized children’s toys, had tweaked the American Girl Doll mystique. That said, the sincerity with which “UglyDolls” pits unblemished conformity against ungainly soul is touching — and, yes, instructive — in all the right ways. The vocal performances really register, from Clarkson’s life-force ebullience to Shelton’s saddened drawl to Pitbull’s street bravura. As Mandy, the Institute girl who’s trying to hide the fact that she needs glasses, Janelle Monáe captures the inner conflict of nice girls who don’t want to be mean but feel that’s the role that’s been set out for them. The message of “UglyDolls” — be yourself! — may not count as social justice, but it’s one that kids now need to hear from pop culture. And “UglyDolls” offers its own variation on it. The movie says that ugly is beautiful and that too much fixation on beauty is ugly. It says that the two should meet in the middle, a merger both you and your mirror can feel good about.