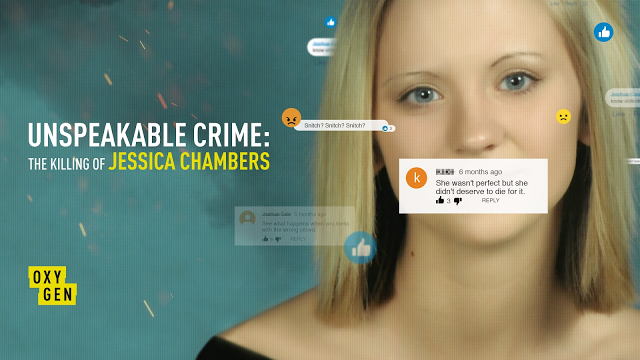 Review:  On December 6, 2014, 19-year-old Jessica Chambers was found with severe burn marks. What followed was a tragic murder, a relentless onslaught of local and national news coverage, racially-charged social media scandals, and a trial that questioned whether or not one of Chambers’ friend, Quentin Tellis was responsible for her death. Oxygen’s latest docu-series, Unspeakable Crime: The Killing of Jessica Chambers, offers a behind-the-scenes look at what happened during this trial ahead of this case’s re-trial later this month

Opening Shot: Intense music plays as The Killing of Jessica Chambers whips through media coverage of the case. Through a series of newscaster reports we learn the basics of Chambers’ murder. She died shortly after she was found next to her flaming car, and Quinton Tellis was charged with her death. As various newscasters cover this tragedy and the racially-charged social media controversy that followed, the introduction cycles through images of Chambers, the crime scene, and the trial.

One of the final things we see is young black man. Stone-faced, he looks at the camera and says “You have to be a really dumb black man to kill a white girl in the state of Mississippi.”

The Gist: On December 6,2014 in Courtland, Miss., Jessica Chambers was found outside of her burning car with burn marks covering most of her body. When asked who did this to her, the 19-year-old woman reportedly said “Eric” before dying shortly after. This senseless tragedy sent the small Southern town of Courtland into chaos, eventually sparking national interest.

Soon after Chambers’ death, Quentin Tellis, a black man who claims to have been one of Chambers’ friends, was charged with the crime. This case pitted a community against each other, drawing severe racial lines in its aftermath. These lines were then fueled by national interest in the case.

At the same time more strangers became involved in the case in an attempt to become couch-cradled sleuths, deepening those racially motivated fractures. The five-part Unspeakable Crime: The Killing of Jessica Chambers attempts to get to the bottom of who killed Jessica Chambers while examining just what it was about this case that inspired so much online interest and shocking hate.

Our Take: There’s a lot of promise in The Killing of Jessica Chambers. The 19-year-old’s case is an odd one from almost every angle. What happened to her is almost completely unknown, there are more than a few suspicious characters in her past, and it stands as a case study in the rise of internet crime fighters. But at least in its first episode The Killing of Jessica Chambers pays a lot of attention to the spectacle of this graphic murder and little to the emotions behind it.

This is a directorial problem more than anything else because the emotions are there. Almost all of this first episode’s interview subjects, from Chambers’ friends and family to the first responder who still feels guilt over being unable to save her, are clearly devastated by this murder. Multiple interview subjects can be seen crying, and the first third of this episode does an excellent job of highlighting what the departed Chambers meant to her friends and family. It’s the tone of the project that makes these meaningful moments suffer.

Filled with weird, borderline irreverent musical cues and bumpy cuts, The Killing of Jessica Chambers seems more interested in the spectacle of this case then asking any hard questions. That lack of questions is inherently fine. Some cases are complicated and nuanced enough that merely observing them through the fly-on-the-wall lens of documentary filmmaking is strong enough. But more often than not this docu-series could have benefited from drinking in this trial’s pain a little less and confronting hard truths a little more.

That’s certainly true of Quentin Tellis, the man accused of Chambers’ murder. The docu-series quickly brings up the fact that Tellis has previously been arrested for the murder of another woman who was brutally tortured before her death, Meing-Chen Hsiao. Whereas Chambers’ story is told through a slew of family and friend character testimonies as well as opinions from professionals, Tellis’ is largely told through his mother, who claims that her son would never murder a woman. But the docu-series itself seems to walk in with its eyebrow raised in Tellis’ direction.

Those are the facts. Tellis was arrested for Hsigo’s murder, and there is a huge amount of evidence connecting him to Chambers’ murder. But at least in its first episode The Killing of Jessica Chambers feels like it leans in one direction so clearly, one has to wonder why this docu-series is being made at all. If the case is as cut and dry as this episode implies, why bother?

The answer rests in the case itself. Chambers’ murder wasn’t the fairly simplistic narrative that’s portrayed in the first episode. Tellis was brought to trial for the murder and originally found not guilty. However after discovering the jury misunderstood the instructions and that many had voted “guilty,” a mistrial was declared. Tellis’ new trial will be held on September 24, 2018. None of this interesting and relevant information is said at the top of the episode, the docu-series instead treating the first trial like it’s a new development.

There are reasons for this docu-series to be a matter of public interest. How online sleuthing affected this investigation and the racially-charged hostility this case inspired certainly fall into that category. But at least after its first episode it’s unclear what we’re supposed to take away from The Killing of Jessica Chambers other than the perverse pleasure of watching a murder trial.

Parting Shot: The ending of this first episode is much like its beginning. There’s a roughly minute-long preview of what’s to come in this new season. There are more clips of the trial, more of both Tellis and Chambers’ families, and more news reports.

leeper Star: Katie J.M. Baker, a BuzzFeed reporter who covered this case, stands out as one of the most insightful interview subjects. Baker primarily focuses on trying to explain why so many people online took it upon themselves to try and solve this case. “It was almost like people wanted to binge-watch Jessica’s murder investigation,” she says. As horrific as that statement is, it’s not inaccurate.

Most Pilot-y Line: Toward the end of this first episode, The Killing of Jessica Chambers finally gets to the trial. In his opening remarks, the prosecuting attorney reminds the jury about the final name Chambers said before she died. “She said Eric or Derrick. That is not his name. His name is Quentin,” he says to the camera. It’s a somber moment that’s made unintentionally confusing by odd editing choices.