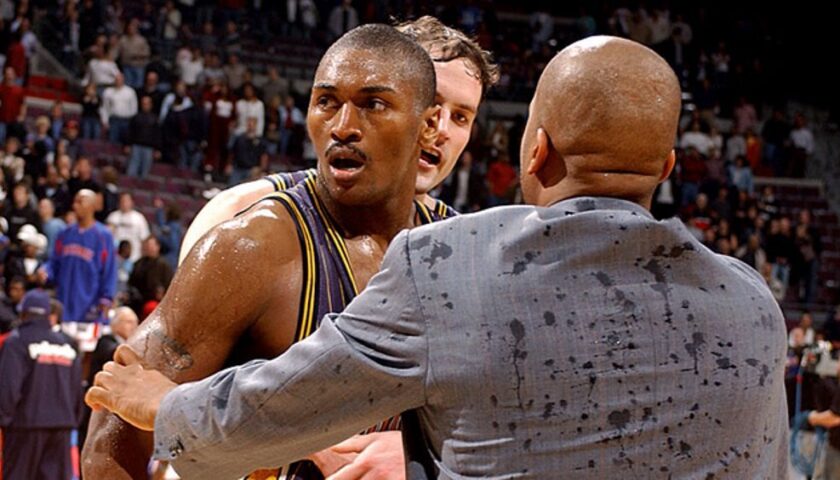 “Untold” is ostensibly about sports, but there’s a curious connector across the new Netflix documentary series. In each of the five episodes, as the best laid plans of teams and athletes begin to unravel, TV ends up a catalyzing factor. Partly, that’s the inevitable byproduct of fame: More notoriety leads to more eyeballs and all the swirling problems that increased attention can bring.

But the parade of nightly news reports and late-night talk show guest spots also illustrates what makes “Untold” such an enticing premise to be seen through a sports lens. As the title implies, the series examines specific chapters in a variety of sports, offering the people at the center the chance to share their feelings years (or in some cases decades) later.

Some of these have a true-crime tinge to them, as with installments covering a minor league hockey team caught up in a federal racketeering investigation or a shocking attack on one of the pioneers of women’s boxing. None of these subjects are particularly breezy, even though some episodes do take advantage of interviewees’ specific senses of humor. (One particular needle drop in an episode directed by series showrunners Chapman and Maclain Way makes a winking reference to another notable Netflix project.) The baseline emotion of “Untold” is the one that plenty of other close reads of history take, often choosing to emphasize the gravity and tension of any given moment.

Over the course of the show’s first chapter, “Malice at the Palace,” “Untold” reaches into the early-2000s context for most of the central figures in what would become a flashpoint beyond basketball. Pacers players Jermaine O’Neal, Stephen Jackson, and Metta World Peace become the primary storytellers, outlining how developments in their careers and personal lives presaged an infamous November 2004 brawl with both Detroit Pistons players and fans. Director Floyd Russ lays out parallel tracks for how a split-second decision ignited a series of changes that would alter an entire league.

While those more personal, singularly focused stories do have plenty to offer, “Untold” finds its groove when it opens up that scope just a touch wider. “Crimes & Penalties,” the Ways’ chronicle of an upstart expansion hockey team, benefits from talking to not just a bevy of players, but a pair of superfans and the commissioner of the league as well. Ranging from just over an hour to 90 minutes, “Untold” doesn’t always have the runtime to dig into each corner of these stories — especially ones that gradually play out over years and years — but the further it manages to open that perspective, the closer it feels to a comprehensive overview rather than one person’s quest to set the record straight.

Some episodes make a compelling case that those records are also meant to be broken. Particularly when it’s clear that the sports media apparatus of the day was ill-equipped to handle what it perceived to be a novel development, there were vital pieces of the prevailing narrative that went ignored. It’s not that “Untold” sets out to find the magical bit of archival that magically solves all previous misconceptions. But there is something potent about the way that most of these episodes deploy tape that hasn’t made it to public viewing before. Whether it’s family home videos, grainy glimpses of arena surveillance footage, or handheld camcorder views of an erupting brawl, each angle peels back a tiny layer from the calcified stories that existed prior.

Paired with the downtime B-roll, ranging from Olympics footage to international tennis matches, “Untold” hits a particular stride in those more unvarnished moments. After documenting how much public opinion was swayed in each of these cases by a prioritizing of certain details, seeing the raw footage isn’t necessarily a corrective but a valuable supplement. It drives home the idea that the untold story is what was always there but never made the final cut the world got the chance to see.

Aside from Caitlyn Jenner and Christy Martin, who each had their moments at the pinnacle of their respective sports, the other subjects in “Untold” aren’t relaying the stories of champions. Yet the drama and the disappointment contained within these episodes doesn’t just relate to the recognizable kind of heartbreaking losses that show up in a box score. These are stories of people who lost parts of themselves in different ways that may have stemmed from their chosen career but weren’t contained to them.

It’s not coincidental that these stories have relevance to the current sports landscape, whether or not the directors of these episodes (who also include Laura Brownson, as wella s “The Wolfpack” and “Skate Kitchen” director Crystal Moselle) could have anticipated the extent to which they mirror current headlines at the time of the show’s release. The opening “Malice at the Palace” episode touches on the aftermath of the on-court/in-stands fight that became the focus of the sports world for a big chunk of the fall of 2004. In hindsight, the litany of media pundits and on-air cable personalities rushing to characterize the actions of a handful of players seems like a precursor to the culture war grievances being leveled on TV and social media every day. Martin and Jenner each faced crushing gender-based personal struggles while trying to prove their worth to a global audience.

The final of these five episodes is set to arrive in a sports world that is maybe more primed for it than ever. Through the story of former top-ranked US tennis pro Mardy Fish, “Breaking Points” looks at the expectations placed on globally recognized athletes. In the midst of a run at the pinnacle of his sport, Fish faced unexpected dangers to his physical and mental health. His chosen response to those pressures echoes some of the stories that have recently moved through the TV and sports world in a particularly resonant way. Still, “Untold” isn’t arriving to scold viewers for not paying attention sooner. It’s more of an effective reminder that a lot of what seem like surprises become far more understandable if you know where to look.