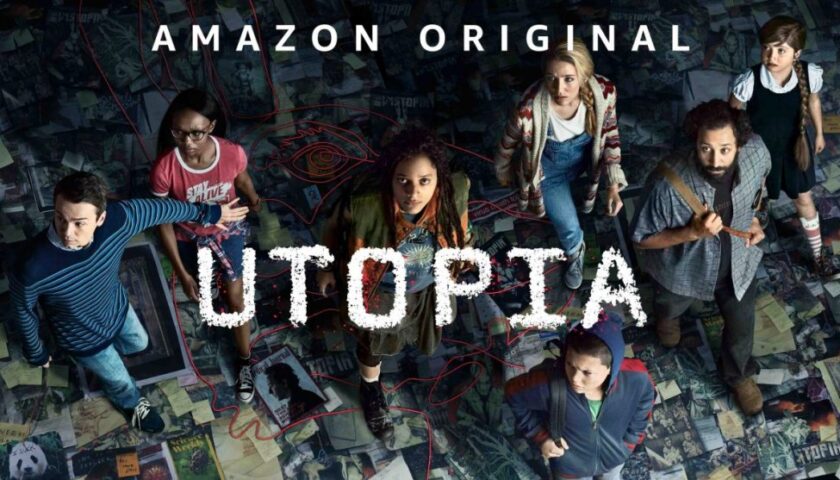 The new Amazon drama Utopia was made for a different dystopia than the current one. “Why do we keep feeling like it’s the end of the fucking world?” asks a character, as a previously unidentified flu strain proliferates across America and the government stands by and does nothing. The answer, disappointingly, is that “someone is ending the fucking world,” and it’s up to a group of conspiracy-minded nerds who’ve previously only “met” each other online to save humanity by… solving prophetic puzzles in a years-old comic book.

Utopia is an adaptation by Gone Girl novelist and screenwriter Gillian Flynn from a 2013-2014 British series of the same name (created by Dennis Kelly, who serves as an executive producer here). But the arrival of its eight-part debut season amid the COVID-19 pandemic makes rooting for its heroes — whose real-life counterparts believe that the Chinese government designed the coronavirus and/or that nefarious forces are spreading the disease via 5G networks — even harder. Less appealing still is the now-tired premise of super-fans suddenly finding themselves in their favorite stories — and realizing that being a part of the adventure isn’t anywhere near as fun as reading about it.

Of course, even the most distasteful or hackneyed starting point can serve as the origin of an incredible journey. But Utopia’s first seven episodes demonstrate that there’s not enough specificity to the characters or fascination in the season-long mysteries to provide the bloody escapism that Flynn intended.

The series opens with a clearly doomed couple (Maya Kazan and Calum Worthy), a pair of almost-newlyweds who discover a gruesome comic book called Utopia in the house she’s just inherited from her grandfather. They hope for a quick windfall by selling the comic to the highest bidder at a geek convention, unaware that it’s the long-awaited sequel to a preexisting book called Dystopia, and that a tiny segment of the latter’s fandom believes its stories about a kick-ass heroine named Jessica Hyde and her rabbit-headed antagonist actually encode warnings of future epidemics. There’s no telling what someone will pay — or do — for a chance to glimpse the future.

Even among the crackpots, the crackpottiest is doomsday-prepper Wilson Wilson (Desmin Borges, who lends his soulfulness to an otherwise soulless production). His comrades-in-wild speculation include idealistic Samantha (Jessica Rothe), who wants to do nothing less with her life than save the world; sweet Becky (Ashleigh LaThrop), who’s searching for a cure to her terminal illness; and skeptic Ian (Dan Byrd), who’s unsure about joining the mission even after Jessica Hyde (Sasha Lane) herself shows up — not least because the heroine’s attitude toward murder doesn’t seem to involve any known system of ethics.

The series’ other casting coups are John Cusack, whose knack for conveying an immediate sense of decency and warmth adds welcome layers to his Big Pharma CEO Dr. Christie, and Christopher Denham, who accomplishes the rare feat of making his quirky hitman, Arby, induce more chills than eye-rolls.

Flynn is unafraid of rapidly adding more and more branches to the Utopia mythology, which occasionally shocks but seldom intrigues. After seven episodes, the heroes remain underwritten archetypes, the villains are unconvincingly all-powerful yet constantly screwing up and there are more traumatized but precocious children (Javon Walton, Farrah Mackenzie) than there should be in a fight against the end of the world.

In all three of her novels — the first two being Sharp Objects and Dark Places — Flynn abruptly thrusts her protagonists into emotional crucibles. That’s what she does with the nerds in Utopia, too, but they’re such passive pushovers when it comes to Jessica’s dictatorial whims that the promised collision between the everyday and the Ragnarokian never really arrives. Byrd gets to offer some comic relief by having his character sporadically mock Jessica’s hyper-intensity, but Utopia could’ve used a lot more of that kind of self-awareness.

u6 It doesn’t help that Lane, who electrified with her acting debut in American Honey, is conspicuously stiff here, growling over-the-top lines like “fear is a luxury” and “I don’t like puzzles — I am one” with the all the vigor of a goth at a pep rally. With heroes like these, who needs villains?