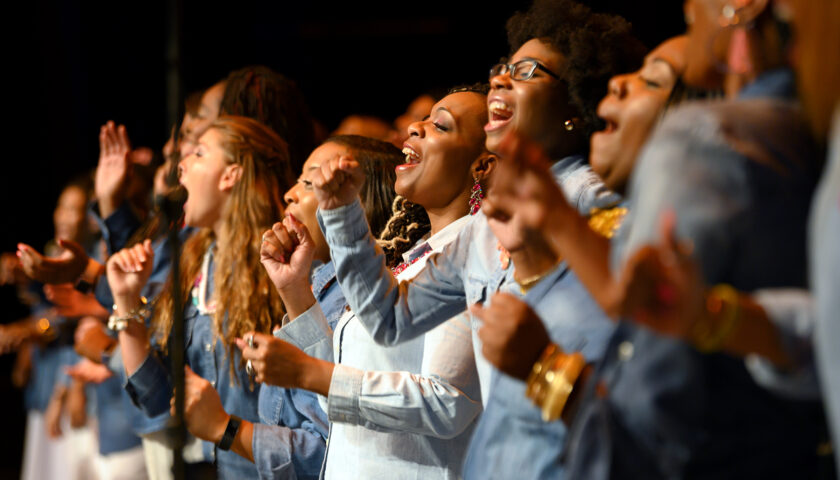 Can the power of music heal the racial divide in America? Bishop Ezekiel Williams hopes so, which is why he set out to build the world’s most diverse gospel choir.

Bishop Williams, pastor of Faith World Ministries in Norfolk, Virginia, sees music as a unifying force that can bridge divides and shape his predominantly Black church into a multiethnic expression of the Christian faith. Bishop Williams enlists his Grammy Award-winning nephew, Pharrell Williams and a team of gospel music experts to help him identify and refine the choir’s talent. Voices of Fire, a six-episode Netflix series, chronicles the development of the choir from the initial auditions to the choir’s first public performance.

Voices of Fire is equal parts reality show, talent competition, and docu-series. While the premise of a gospel-themed reality-talent-documentary might seem suspect on the front-end, Voices of Fire is surprisingly well-done. It avoids most of the significant pitfalls of its collective genres. As a reality show, it manages to sustain attention without being over-the-top. As a talent competition, it is entertaining without feeling formulaic. As a docu-series, it is informative without being dry or moralizing. Additionally, as a series that deals with Christian-faith themes, it manages to be inspiring without being sanctimonious or preachy.

During the audition process, we are introduced to a plethora of talented singers. Their renditions of gospel standards like “Amazing Grace” and “Blessed Assurance” are easy on the ears. One thing that Voices of Fire does well is to showcase truly talented people rather than exploit those with less vocal prowess. In fact, everyone who participated in the show’s audition process—about 300 people—was culled from a pool of 3000 submissions and invited to audition for the choir.

Voices of Fire is not perfect, however. In addition to the auditions, the first three episodes introduce viewers to several of the individuals who hope to make the choir. The series attempts to develop various aspects of their stories and to give viewers someone to root for through the process. Unfortunately, the series’ attempt to establish viewers’ connection to potential choir members toes the line of inspiration and exploitation.

The series attempts to highlight how some of the subjects overcame adversity and the role that music played in their journey. Regrettably, some of the stories were framed in a manner that lacks nuance and fails to consider the potential impact on people with similar stories. A particularly unfortunate moment involved the testimony of someone with a disability that was followed up with a statement (taken from a separate interview) about how we’re all “damaged goods.” The show’s use of traumatic stories from people who did not make the choir also seems especially insensitive.

Overall, Voices of Fire is a pleasant surprise. It is a fun and easy watch that doesn’t make many demands on the viewer. For the uninitiated, it is an accessible introduction to the genre of Black gospel music. Those who are more familiar with the genre will appreciate the showcase of talent and the development of the choir.

Voices of Fire premiers on Netflix on November 20.