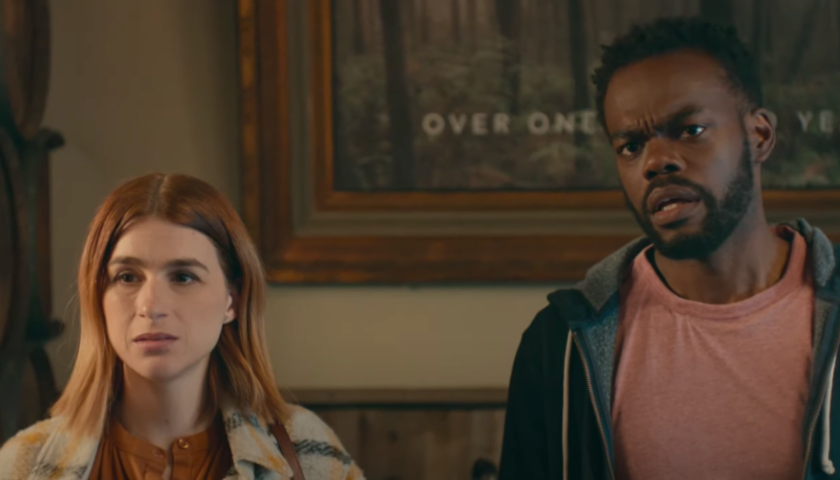 Love is a many splendored thing until you break up, which is the case for Lori (Aya Cash) and Doug (William Jackson Harper) in the upcoming romantic comedy We Broke Up premiering on April 23. And EW has the exclusive debut for the twisted rom-com.

“A lot of relationships reach this moment where you’re both doing that thing that you always do and one or both parties decide it’s time for a change,” Harper tells EW.

“If they refuse to talk, how can they stay together?” he continues. “A lot of relationships could benefit from some honest communication. In We Broke Up, we tell the classic story about this very relatable situation where two people find themselves on very different pages though still very much loving each other.”

Doug agrees to pretend he and Lori are still together and attend her sister Bea’s (Sarah Bolger) wedding weekend, which promises many an awkward situation.

“There will be fun wedding games you’ll have to play with family and strangers, which is always great to create awkward moments,” Cash shares with a giggle. “Like any good wedding, there’s hot singles around to distract them both and possibly create some drama between them.”

“Viewers can expect to see them get in a bit of trouble but they’re both good people,” she adds. “That’s what’s nice about it, actually. Neither of them is the villain of the breakup in my mind, which probably means that I am. Like when people say, ‘There’s no a–hole,’ but it’s usually you. Either way, I don’t think there’s a villain here.”

Whether the pair are able to work through their issues in one weekend is as yet unknown, though Harper says that isn’t the most important question.

“I’d like to think that this isn’t the end of the conversation but it’s the beginning of a new one,” he says. “I think this is one of those weird inflection points that you have in your life where it feels like everything is about to change. You’re not necessarily throwing everything out that ever existed before, but maybe the way you relate to your circumstances will.”