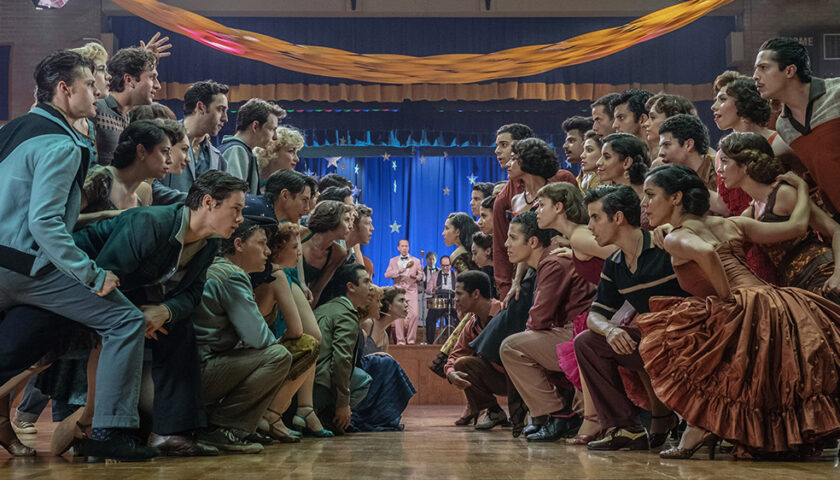 In a world where Batman seems to reboot biannually and even Space Jam gets a sequel, it helps to know that some things are still sacred. Like West Side Story, the 1957 stage musical whose definitive 1961 movie version has remained rightfully untouched for 60 years (at least on screen). The EGOT slurry of names brave enough to take it on in 2021 — Steven Spielberg directs, Tony Kushner penned the script, and Tony winner Justin Peck has tweaked the original Jerome Robbins choreography — may not be a match for the 20th-century icons who created it, but who is? More importantly, they’re wise enough to stay largely faithful to Arthur Laurents’ book, Leonard Bernstein’s music, and Stephen Sondheim’s sublime lyrics, with just a few well-gauged updates.

They also make it look great: West Side (in theaters Dec. 10) opens on a gleaming 1950s New York City, god’s-eye cameras swooping and gliding over the vast construction site that will soon become Lincoln Center. Until then, its alleys and empty lots belong to the world’s premier juvenile delinquents; the Sharks are Puerto Rican, the Jets mostly Polish and Irish, and these few square blocks are the nexus of everything they care about. Never mind that change is coming, along with the new buildings — the Jets might be “the last of the can’t-make-it Caucasians” that gentrification is about to erase, as a gruff detective played by Corey Stoll is happy to inform them, but until then, they’ll fight with fists and knives to defend their territory from the brown-skinned interlopers they don’t consider fellow citizens, no matter what geography books say.

The Sharks have their leader, a pugnacious part-time boxer named Bernardo (David Alvarez), and the Jets have Riff (Mike Faist), but the latter’s true north star is Tony (Ansel Elgort), recently released from prison for assault and eager to turn over a newer, gentler leaf. He’s committed to being a model parolee, stocking the shelves for widowed drug-store owner Valentina by day (the undimmable Rita Moreno, a joyful holdover from the original cast), and keeping a bedroll in her basement. If only Riff didn’t work so hard to lure Tony to the local dance, and if only his eyes didn’t lock with Bernardo’s baby sister Maria (Rachel Zegler) across a crowded gymnasium the moment he walked in.

Their connection is immediate and immediately trouble; a stolen kiss under the bleachers is enough to make Bernardo demand a rumble and set the plot machinery in motion. Anyone who’s ever hummed “Gee, Officer Krupke” and “I Feel Pretty” — the soundtrack, astoundingly, is still the longest-running no. 1 album of all time — or read a little bit of Shakespeare will know the gist of what comes next. What’s surprising is how well Spielberg and Kushner massage the text to make it fresh without losing essential fidelity to the story: A trans character (Iris Menas) comes more explicitly into focus, and the teenage hooligans, beneath their ducktailed hair and rolled cuffs, pulse with a modernity that feels urgent and real. It’s still the ’50s, but sex and danger are more than implied here, and so are the realities of race and class.

A substantial chunk of the dialogue is also delivered in Spanish without subtitles or translation, which some viewers will undoubtedly make noise about. But it sits right with the update; if the Babel tower that Manhattan is built on isn’t all-American, what is? What still feels classic is the setting — New York as a neighborly place of steam grates, corner bodegas, and laundry lines strung between tenements — and the cast. Zegler and Elgort don’t really dance, but their young lovers are the luminous center of the story, with voices like bells and faces so pretty it almost hurts to look at them directly. (Though Spielberg does repeatedly, in swooning closeups and extravagantly wide-scoped musical numbers.)

The best acting often happens off to the side: The wiry, fine-boned Faist, best known for his Tony-nominated turn on Broadway in Dear Evan Hansen, is a standout, and so is Hamilton’s Ariana DeBose, who has the unenviable task of appearing in the role Moreno originated on-screen and famously won an Oscar for. Her Anita is a pure dopamine rush on the dance floor and a small revelation off of it, dimensional and fiercely tender beneath her brash exterior. (When she and Moreno share a brief late scene, they’re both electric.) Whether any of those factors alone justify a remake, it’s hard to say; necessity is in the eye of the beholder, or maybe just the demographic that will be coming to all of this new. No matter how poignant or pointedly reworked, West Side Story is still high Hollywood fantasy: Where else outside of a sound stage can turf wars be resolved with a warbled melody and a kick-ball-change? But it feels like a rare achievement to even attempt to scale the unscalable and still, after more than half a century, be able to make it sing.