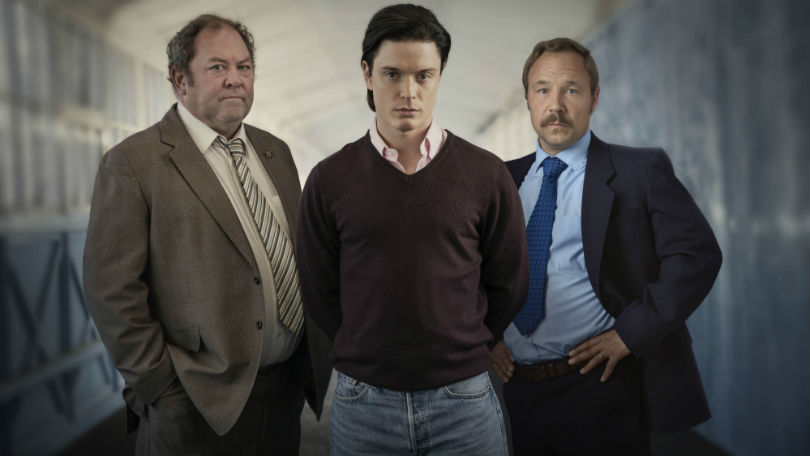 The problem with dramatising famous – or infamous – events that took place well within living memory is that you are not that free to dramatise anything. You are not free to elide moments, gloss over awkward bits or smooth out the narrative through light fictionalisation. Reality bogs you down. And reality can be quite unbelievable.

Such is the besetting problem with ITV’s White House Farm, the story of Jeremy Bamber’s murder of his parents, his sister and her six-year-old twin boys at their family farmhouse in Essex in 1985. It opens with Bamber (Freddie Fox) calling the police, claiming that his father had just rung him to say that his sister Sheila, who had been diagnosed with schizophrenia, was “going crazy with a gun”, before the call was cut off. (Sheila, incidentally, is played very well by Cressida Bonas, putting paid to the rumours of stunt casting that arose when it was announced that a woman who was once Prince Harry’s girlfriend had got the role). The police descended on the house and discovered the five family members shot dead. Sheila’s body was found in the house, locked from the inside, with the shotgun that killed them all. The police initially assumed it was a murder-suicide committed by her.

The investigating officer, DCI Taff Jones (Stephen Graham, not given much chance to exercise his usual subtlety in a shouty, one-note part), cleaves to this theory as truth even after his underling, DS Stan Jones (Mark Addy), raises doubts. These include – and here’s where reality intrudes to drama’s detriment – the fact that Sheila was shot twice in the head. Technically possible, the experts say, and that’s good enough for the villainous DCI. But not for Stan and not for viewers, to whom it looks simply bonkers. Possibly it was slightly more complex in real life, but in that case every last detail of any complication needed to be up there on screen if we weren’t just to boggle in detached disbelief thereafter, as bodies were moved, and bloodstained carpets torn up and burned alongside tainted furniture at Bamber’s behest before the crime scene was fully investigated.

There are five parts still to go, but so far it’s all a little paint-by-numbers. Dogged Stan dogs on, while Bamber’s cousin Anne (Gemma Whelan, like Graham, also being wasted) gives perturbed sidelong glances at Jeremy as his reactions to having his entire family slaughtered increasingly deviate from the norm. Meanwhile, Colin Caffell (Sheila’s ex-husband and father of the murdered boys) sifts through sensationalist newspaper articles that revel in her apparent guilt. Taff clings stubbornly to his belief in it even as Stan shows how the blood trails, positionings and periodic need to reload the gun are entirely incompatible with Sheila’s supposed involvement and as Anne discovers how a killer could have got in and out of an apparently locked house undetected.

The drama doesn’t open out (or at least hasn’t yet) into an interrogation of anything beyond the murders themselves. There is no deepening of the issue of how willing the powers that be are to blame a woman, or to believe that any hint of female instability means the sufferer must be capable of multiple murder. And, as the murders themselves have little wider significance, the question of what purpose such a show can serve arises. Bamber’s motive was mundane (the pursuit of an inheritance) and its expression anomalous (few are moved to such violence, and those who are surely suffer from the kind of psychopathology we, as a society, can do little to avoid).

Caffell gave his blessing to the series, and was involved in its making, and of course it is to be hoped it was cathartic in some way for him. But beyond that, there are the same worries that attend every retelling of a senseless crime or rehash of a serial killer’s actions: should we be giving them publicity? What and whose appetites are we satisfying when we do? Does there need to be a greater good served and, if so, what is it? Some of the publicity for White House Farm says the series is designed to explore the emotional impact of the killings, but thus far it has done little of that. And, perhaps more pressingly, who are the people who need to be walked through the emotional impact on the remaining members of a family whose core was wiped out by a relative? I don’t think I want to pander to them any more than I want to know them.