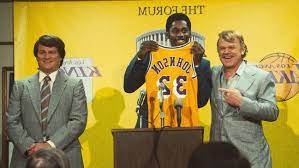 Adam McKay has made quite the transition as a filmmaker over the years. After Anchorman, Step Brothers, and The Other Guys, McKay began to blend his sense of humor with political and satirical fare like The Big Short and Vice. Last year, he turned his gaze on climate change with Best Picture nominee Don’t Look Up. His small-screen success producing Succession has led to his latest project at HBO, the NBA epic Winning Time which chronicles the rise of the Los Angeles Lakers in the 1980s with stars like Kareen Abdul Jabaar and Magic Johnson. The result is a fast-paced, dynamic, and very funny look at the world of professional sports through McKay’s visual lens. It may be very biased in favor of Lakers fans, but it is still a fascinating and unique glimpse into one of professional sports’ most famous dynasties.

Starting with Magic Johnson’s HIV diagnosis in the early 1990s, Winning Time quickly flashes back to 1979 as Jerry Buss (John C. Reilly) acquires ownership of the Los Angeles Lakers. Right off the bat, the series showcases a slew of creative tricks including a pulsating soundtrack, witty title cards that describe characters and settings with cheeky subtitles, and fourth-wall-breaking moments from multiple characters as they address the camera. Within the first minutes of the first episode, McKay quickly shifts between film stocks and styles that echo the era the story takes place in. From black and white celluloid to grainy stock and then cheap videotape, I immediately recalled some of the film techniques used by Oliver Stone on Natural Born Killers, JFK, and Any Given Sunday. All of these techniques add to the gloss and sheen of the story while amplifying the momentum as we meet the various characters and players in this series.

Nothing about Winning Time is small and that goes double for the massive cast. While John C. Reilly and Quincy Isaiah as Magic Johnson are the primary players in this tale, we spend a lot of time with the entire Lakers squad and those in their orbit. From Jason Clarke as Lakers coach Jerry West, Gaby Hoffman as executive Claire Rothman, Hadley Robinson as Jeanie Buss, Solomon Hughes as Kareem Abdul Jabbar, Adrien Brody as Pat Riley, DeVaughn Nixon as his father Norm Nixon, Sally Field as Jessie Buss, Michael Chiklis as Red Auerbach, Gillian Jacobs as Chris Riley, and even Mike Epps as Richard Pryor and Max E. Williams as Jack Nicholson, the list goes on and on with the recognizable faces populating this ten-episode season. Everyone here is really excellent as well with no one playing their real-life counterparts as caricatures. Highlights include Solomon Hughes and DeVaughn Nixon who portray Lakers icons Jabbar and Nixon as realistic, even if it is unflattering.

The anchor of this series is Reilly, who does some of the best work of his career as Dr. Jerry Buss. With his chest exposed and his Trump-esque hair a sight to behold, Reilly digs into playing Buss as a likable character and one who has a vision that everyone buys into. While originally set to be played by Michael Shannon, the role of Buss was also the breaking point for the friendship between McKay and Will Ferrell. Ferrell likely would have been fantastic in the role which is going to definitely come back around during awards season. Most of the male characters here, including a fiery turn by Jason Clarke, are well-rounded. The writers attempt to do the same for the female roles, especially Gaby Hoffman and Hadley Robinson, while adding the additional echoes of how females were treated in the workplace in the 1980s.

Created by Max Borenstein (Godzilla vs Kong) and Jim Hecht (Ice Age 2), Winning Time doesn’t condense much of the book Showtime on which this series is based. It gives a lot of focus to all of the characters, both players and not, and rarely tries to make us think these titans of the court are flawless. There is a lot of humanity given to everyone, but the series never has to deal with many failures as history proved this squad to be one of the best NBA teams of all time. So, knowing that they will succeed doesn’t imbue the story with nearly as much tension as a true underdog story would, but that is supplemented by the quality of these performances. It also helps that the team of directors, led by Adam McKay’s great premiere episode, root themselves in the aesthetic of the era and all of the tricks McKay employs. While McKay only directed the premiere, the remaining episodes are directed by Tanya Hamilton, Damian Marcano, Sallui Richardson-Whitehead, Payman Benz, and Jonah Hill. Hill, who directed the second episode, turned in my favorite chapter of this saga aside from McKay.

Winning Time is a great show with a ton of hilarious moments that punctuate the dramatic arc of this tale and only falls short in delivering a story that is balanced from both sides. This series is for the Lakers and their fans. All of the other teams, especially the Boston Celtics, are portrayed as the outsiders and the enemy, but even non-basketball fans will find a lot to enjoy with this show. What Mad Men did for advertising, Winning Time will do for the NBA. With a deft and biting commentary on race and gender and how it factored into the success of the Los Angeles Lakers dynasty, Winning Time is a highlight of 2021 already and should earn a well-deserved spot on your DVR.