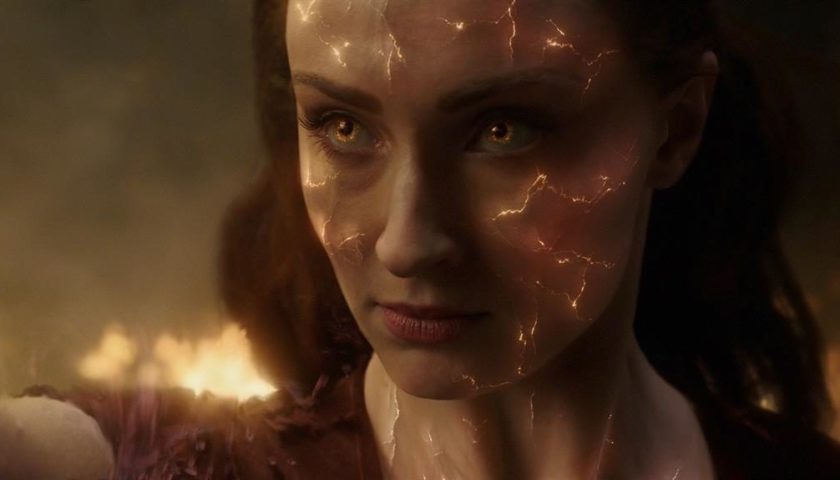 Review:How powerful is Phoenix, a.k.a. Jean Grey (Sophie Turner), the dark and stormy heroine of “Dark Phoenix”? It’s 1992, and on one of her first missions as an X-Woman, she is sent up on the X-Jet, along with the scarlet-haired hellion Mystique (Jennifer Lawrence), Cyclops (Tye Sheridan) in his Bono wraparounds, the chivalrous Beast (Nicholas Hoult), the fearsome Storm (Alexandra Shipp), and all the rest of them. Their job is to save the astronauts who are traveling on the maiden flight of the Space Shuttle Endeavor.

The ship is caught in one of those centrifugal movie thingies that cause a spacecraft to go into a fatal spin cycle. After several of her comrades fail to stabilize the situation, Jean gets beamed out there, and what happens — be warned, this is very scientific — is that she absorbs all the force and light and energy and mojo from the solar flares that are buffeting the Shuttle. (As we learn later on, she absorbs more than that.) She drinks in all that power, soaking it up in vast protoplasmic gusts of swirling magenta CGI. She soaks it up and emerges, essentially, as X-Woman 9.0.

Jean is now so powerful that her skin has tiny pulsating cracks in it, through which we glimpse the light, as if her insides were the detonating core of a nuclear reactor. She’s so powerful that she makes Bruce Banner, after his transformative accident, look like a double-A battery. She’s so powerful that Charles Xavier (James McAvoy), the X-Men chief executive who has been Jean’s mentor ever since he saved and fostered her (in ambiguous circumstances) when she was 8 years old, declares, “Her mutation has grown too powerful!” She is, in a word, unstoppable, but as “Dark Phoenix” makes clear, having that much power inside you isn’t a state that anyone would envy.

As the 12th movie to feature the X-Men (that’s counting the two “Deadpool” films), and the one that’s officially been designated as the last installment of the “X-Men” franchise, “Dark Phoenix” arrives with a long and bumpy road of twists and tricks and FX and characters behind it. Hugh Jackman’s Wolverine, in “Logan” (2017), got a fantastic send-off to the beyond, ending that strain of the series on a dramatic epiphany. Collectively, though, the “X-Men” films, with their densely jumbled sprawl, their offshoots and restarts, their patchwork fusion of “history” and fantasy, are not a series I’m prone to holding in my head all at once (at least, not without it causing a migraine), so the sense that this is now, at long last, the concluding chapter comes down to very little. Okay, it is. But who’s to say they couldn’t just start the whole damn thing up all over again? If “Dark Phoenix” does well (and it should do well enough), stranger things have happened than to turn Phoenix into the new Wolverine.

A kind of quicksilver do-over of Brett Ratner’s “X-Men: The Last Stand” (2006), the maligned and, ultimately, disavowed third installment of the franchise, “Dark Phoenix,” you could say, is a functionally energized and rather bare-bones movie. Jean gets her cosmic power surge, and then, with her loyalty as shattered as her old identity, she goes underground to uncover the mystery of who she is. She lands at Genosha, the farm commune of mutant refugees presided over by Eric (Michael Fassbender), and her need to pursue the hidden truth of her origin moves her toward a clash with the guardian of that secret, Professor X.

Yet “Dark Phoenix” took me by surprise. Simon Kinberg, who wrote and directed it (he was the co-screenwriter of “The Last Stand” — this is his first time helming a feature), is a more sensual and intuitive filmmaker than Brett Ratner. He doesn’t pad out a generic story with the rollicking eye candy of mutant effects. He uses effects to tell the story.

Jean drifts through the film in a convulsive trance of intensity that’s a whisper away from traumatized. Trauma looks good on superheroes (it’s part of the lifeblood of the comics), and Sophie Turner, from “Game of Thrones,” with her green eyes and cosmopolitan hauteur, gives Jean a glinting sensual fire, a fusion of triumph and dismay and sheer violence — it’s like watching Vivien Leigh play a vengefully irradiated badass. Jean has good reason to seek vengeance, yet she’s reckless; at a certain point, she kills off one of the most admirable of our heroes. Turner’s damaged conviction holds “Dark Phoenix” together, giving it a treacherous life force.

Because there have been so few superhero films that feature women in the lead roles (you can still count them on one hand — a lopsided situation that is, gratifyingly, beginning to fall by the wayside), it’s understandable that they’ve all dealt, more or less explicitly, with the feminization of power. But “Dark Phoenix” takes blockbuster gender politics a step further, using Jean’s mistress-of-the-universe state to forge an allegory of the rise of women that’s sharply compelling in its renegade/victim edge.

The movie has the wit to cast Jessica Chastain, with white-blonde tresses and barely-there eyebrows, as Vuk, an alien shapeshifter who resembles an albino replicant and tries to enlist the alienated Jean in helping her to take over the planet. You might think of this as the Tilda Swinton role, though Chastain plays it with a repressed fury that’s almost operatic. Vuk is a pure villain, but when she tells Jean that people look askance at Phoenix’s power because that much power in a woman is always demonized, the seduction of her argument holds sway. It’s no wonder that Jean starts to pour power right into her.

The light-show effects have a mid-’90s fanciful cheesiness, and I dug them for that reason. There’s also a visual motif that works terrifically well: When the characters get beamed somewhere, they’re teleported in a split-second whoosh, vaporized into smoky clouds of Crayola granules. Yet Kinberg also knows how to put the metal onscreen. A climactic set piece is set aboard a speeding train, where Eric (Michael Fassbender) and the rest of the X-Men are traveling under guard, and Kinberg stages this sequence with a hellbent majesty that feels like something out of “Snowpiercer.” Fassbender knows how to emote in tandem with the effects — he mind-crumples a train, and you feel every finger of force — and when dozens of machine guns are hovering in the air, blasting away at Chastain, and the bullets dent her but leave her unharmed, the movie achieves a deranged flamboyance.

Does it have a human story to match? Or, rather, a mutant human story? I thought so. James McAvoy’s performance is driven by a compelling ambiguity. His Professor X is vain, controlling, and PR-hungry, not to mention a grand deceiver — all the things Jennifer Lawrence’s Raven accuses him of being. Yet what he says in his own defense is true as well: He’s desperate to protect the status of the X-Men, to not let them slip into being stigmatized, once more, by the world at large. What happened to Jean as a child was cruel, but maybe it was necessary. McAvoy, with his gleam of cunning, plays to both sides of our sympathies, and so does Turner, who gets us to embrace Jean as a superhero, in part, because she’s a destroyer. The pleasure of “Dark Phoenix” is watching her emerge from the wreckage.