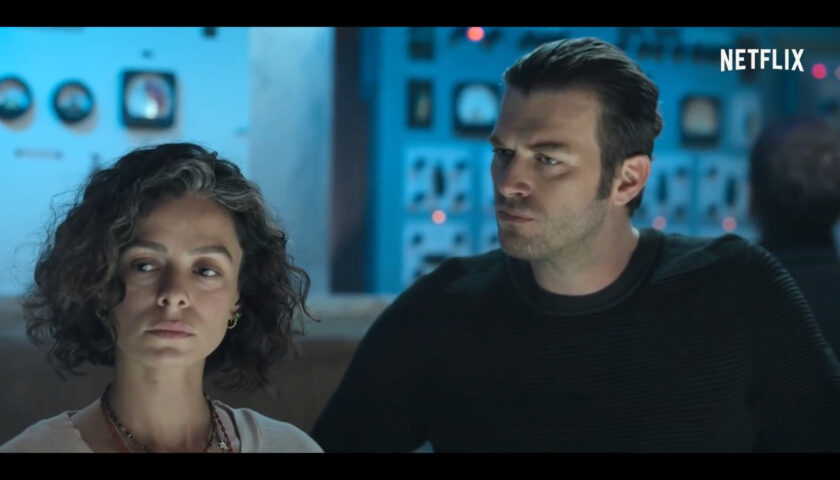 The best thing about Netflix is the amount and quality of its international content. One of the standouts has continually been Into the Night. A Belgian production, the series followed a group of survivors outrunning the dangerous sun to avoid dying from radiation in the daytime. To wrap up, Season 2 on a cliffhanger, Into the Night, ended with a man running down a hallway in the see bank facility in Norway, confronting Ayaz, and being shot at after coming out of the water on a submarine with Yakamoz S-245 on the side.

Arman (Kıvanç Tatlıtuğ) is the lead scientist on a research trip to find a once thought extinct coral. But when the world is threatened by an unknown natural catastrophe in the middle of their deep-sea dive, Arman and his science crew Defne (Özge Özpirinçci), Felix (Jerry Hoffmann), Cem (Onur Ünsal), and Rana (Ecem Uzun), need to get on board a military submarine to survive. Forced to submerge during the daytime to escape the life-ending sunlight, Arman and his crew try to put their skills to use and find out how to survive in a new world while tensions with the submarine crew build. Not only does distrust grow between the characters, but questions about the true mission that the Yakamoz is on grow throughout the seven-episode series.

Yakamoz S-245 is a much slower pace than its plane-flying counterpart due largely to the submarine being a more secure situation. That said, in episode three, the series gets moving and doesn’t stop. But as the danger increases and the food begins to run low, Arman and Umut (Ertan Saban), the sub’s leader, start to push on each other. Each believes that they have everyone’s safety in mind; the two catapult the submarine towards disarray as the division between the scientists and the submarine crew grows deeper and deeper.

Like Into the Night, Yakamoz S-245 uses global disaster and strangers being pushed together for survival to broach the topic of humanity and what morality means when the world is ending. With secrets lying beneath the surface, the audience gets the chance to dive deep into the relationships between characters and watch them slowly chip away. Additionally, the folks on the Yakamoz find themselves in even more volatile situations as they meet other survivors who have done horrible things to survive.

As a whole, Arman and Umut are two ends of the spectrum when it comes to leadership, and the actors who bring them to life pull the series and its themes together. Balancing against each other, Arman is driven by both science and emotion in a way that prioritizes his closest friends above all but ultimately extends grace and chances to everyone he encounters. On the other hand, Umut is a military man through and through, and this comes with a vicious morality that questions everyone he doesn’t know as if they’re enemies. Looking for the bad in everything and everyone else, Umut leads through fear but maintains his logic.

That is until my main issue with the series arises, Umut moves from militaristic logic to unhinged and selfish. While everyone around him, especially the science crew, continually characterizes him as malicious and a bit psychotic, that doesn’t come across in character. In fact, out of every military man we’ve seen from the series and Into the Night, Umut is the only one who has done enough to earn trust. The heel turn into someone unrecognizable is too sharp and jarring.

However, this is one complaint for seven episodes that bring excellent science fiction storytelling and rising stakes. Additionally, even though Yakamoz S-245 is rushing towards the ending of Into the Night Season 2, it doesn’t require that you have watched any of that series. In fact, moving from this series to the first one works extremely well. But if you have seen Into the Night, you can piece together timelines and notice elements from it that work extremely well to enhance Yakamoz S-245. This balance comes directly from Kıvanç Tatlıtuğ’s ability to carry the series as a lead and Ertan Saban’s ability to push him forward.

Ultimately, Yakamoz S-245 expands a world that has to be one of my favorite science fiction series that Netflix has put out. It has a fantastic premise, near-perfect execution, and compelling characters. The only thing I hope is that we’re not left hanging too long on Yakamoz S-245’s cliffhanger.