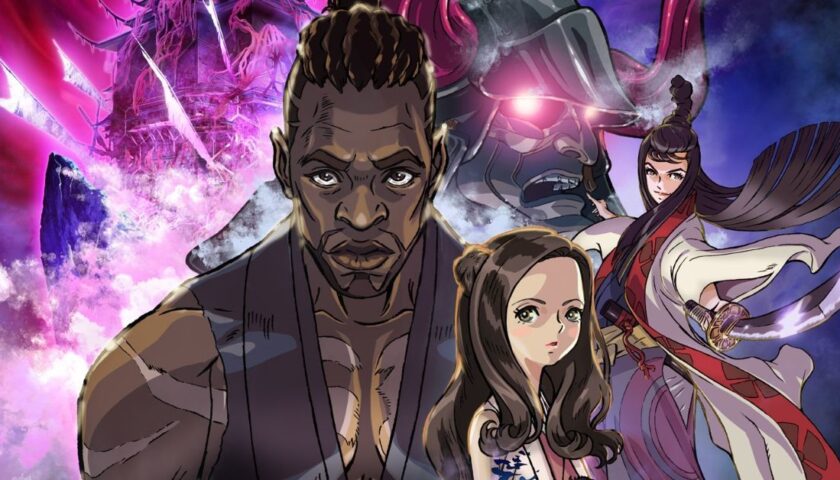 “Yasuke” is purportedly a show about history’s first Black samurai. When the Netflix adult animated series sticks to that idea, it’s pretty good. Unfortunately, it doesn’t take long for the six-episode series to lose sight of its compelling protagonist in favor of increasingly outlandish fantasy elements.

The series, which hails from animation veteran LeSean Thomas (whose credits range from “The Legend of Korra” and “Black Dynamite” to “The Boondocks”) is very loosely based on Yasuke, who served Oda Nobunaga, the “Great Unifier” of Japan, as a samurai in the 16th century. “Yasuke” begins near the end of the real samurai’s recorded history: Records state that Yasuke was captured shortly after the defeat of Nobunaga’s forces and his ultimate fate is unclear; in the Netflix show, Yasuke (voiced by LaKeith Stanfield) eventually escapes and spends the later part of his life as a peaceful boatman haunted by dreams of his past. A handful of flashbacks in the show’s early episodes outline the key events of Yasuke’s time as a samurai, but the vast majority of the show hinges on an original plot that takes place years after the real world story of Yasuke concluded. This version of Yasuke exists in an alternate reality full of magic, mechas, and other fantastical elements that are jammed into an otherwise fairly grounded version of Japan with seemingly no thought given to narrative cohesion.

But let’s start with the good: There are not many verifiable details about the real-world Yasuke but the show does an admirable job of dramatizing the key parts of his life that have been recorded throughout history. Yasuke’s chance meeting with Nobunaga and his gradual rising through the latter’s ranks are outlined throughout a variety of flashbacks in the first three episodes, which are prevalent without detracting from the show’s primary plot. Internal strife about Nobunaga’s relatively open-minded (for the time) outlook are hinted at, and Yasuke’s worldview is briefly explored, as is his talent for swordplay, which is best showcased in a thrillingly bloody melee in Episode 3.

Outside the flashbacks, “Yasuke” does an excellent job in its first three episodes of showing, rather than telling, what life is like for the protagonist and ordinary people in an era where the country is controlled by a more-or-less supernatural monster. “Yasuke” makes an incredibly strong case for itself in the first half of the season, and there’s reason to stay optimistic even after it becomes clear at the end of Episode 1 that the plot will focus on Yasuke’s quest to escort a magical girl instead of diving deeper into the actual protagonist’s history.

If only the story didn’t become so by-the-numbers. That magical girl is named Saki, a walking MacGuffin that the show’s antagonists want to acquire to become more powerful. Or something. Close enough. It’s a tried-and-true formula but “Yasuke” makes no effort to differentiate itself from the myriad fantasy films and television shows that have already explored this kind of relationship between world-weary mentor and innocent student before. Everything the show does to characterize Yasuke early on is excellent, but we don’t get to spend enough time learning about and emphasizing with the character before he’s reduced to a generic action hero who slaughters cannon fodder before engaging in episodic boss battles. “Yasuke” doesn’t falter because it isn’t a historical drama or character study — it just so happens that most of the show’s elements not focused on its titular character are to its detriment.

Yasuke’s journey might not be especially gripping, but that’s no fault of Stanfield, a stellar actor who does his best with the material he’s provided. Yasuke, like most media depictions of samurai, is portrayed as the strong and silent type and though the character isn’t one for lengthy monologues or quips Stanfield brings sincere emotion to the more dramatic and tragic scenes involving his character, especially in the aforementioned flashbacks. Stanfield’s voice always matches the character’s imposing physical presence and there’s a real weight behind everything he says. If only he and his character were given more to do throughout the series.

The show’s fantasy elements don’t add much except confusion. The attire, customs, and traditions are period accurate. Samurai fight with katanas. And yet, there’s also a towering Russian woman who can transform into a bear. There are mechas and inexplicable forms of magic. These things appear with increasing prominence as the show progresses and there’s never a rhyme or reason to their inclusion beyond pure spectacle. There’s nothing inherently wrong with mixing this kind of outlandish fantasy and sci-fi into a more grounded setting but these elements just seem out of place in “Yasuke.” Many people in the show are fascinated by Yasuke’s dark skin but don’t blink an eye at a sentient robot mercenary — why does a sentient robot mercenary even need money? Why do samurai fight with katanas when there are piloted mechas and powerful magic users who could annihilate them in an instant? Where did the godlike leader of the evil Dark Army — yes, the Dark Army. It has a Dark General! — acquire her nigh omniscient powers?

There’s not much of an overarching theme or message to supplement the increasingly nonsensical action, either. There’s the expected handful of mentions about the hero’s skin color and outsider status and a few racist villains, but “Yasuke” is too preoccupied with its wacky video game escort mission story and action to dig into what Yasuke’s boundary-breaking work actually means to him and the people he coexists with. There’s also a noticeable lack of attention for the show’s supporting female characters, many of whom have exciting superpowers but otherwise lack characterization. It’s telling that almost all of the show’s supporting men make it through the season unscathed; the same can’t be said for the women.

However, none of this is to say that there aren’t any memorable characters and moments throughout the show. The aforementioned robot mercenary is the show’s comic relief and it steals every scene its in, as does a wildly over-the-top European priest, whose character design and mannerisms are so blatantly evil (he has Church-endowed brass knuckles!) that it’s hard not to crack a smile whenever he saunters around on screen. There are splashes of humor and great chemistry between several characters in the show’s first half and when “Yasuke” focuses on its namesake protagonist it almost builds up enough goodwill to offset the fantasy elements that overtake the story in later episodes.

Almost, but not quite. The final two episodes of “Yasuke” are essentially two agonizingly drawn-out battles that mash a myriad of random magical elements together: Super strength. Visiting the astral plane. Hypnosis. Thought projection. Force fields. Resurrection. Using telekinesis to rip a body apart (credit when due, there’s gruesome fun in that last one). Whatever. There’s no plot and the pacing is all over the place. The point is, Yasuke and Saki take on the show’s big bad, while the supporting characters fight the big bad’s disposable army. If you’ve seen any recent Marvel or “Star Wars” title, or practically any other mainstream action film in the last decade, you get the idea. It’s a shame, because there are glimmers of potential that suggest “Yasuke” could be so much more.