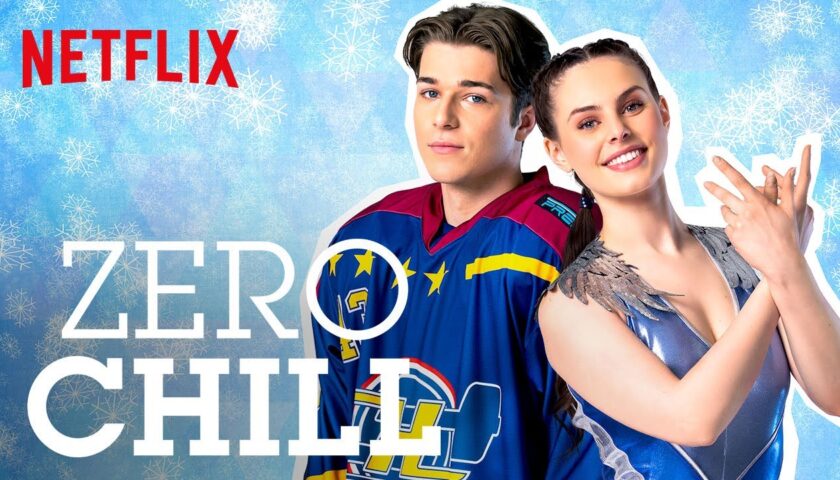 Zero Chill premiered today on Netflix and, after giving you some goodies about this show in our advanced review, it is time to analyze everything that this new, familiar and promising show gives of itself. Because this season 1 boils down to finding out what dreams are made of.

Zero Chill season 1 is a family show.  It is not overly dramatic, on the contrary, it has just the right amount of drama to keep you interested but it is a drama that becomes light, that hooks you and makes you can’t help but keep watching the show.  The pace is fast, that is, secrets and misunderstandings don’t take long to come to light and that is great because that way they can develop the consequences without wasting too much time.

I think the right words to define this show are three: family, friendship and love.  Family dynamics are really present in Zero Chill.  Mac and Kayla’s parents focus too much on their son’s meteoric sports career in ice hockey while neglecting their daughter’s career in figure skating.  For them, Mac is the star and they push him for it while Kayla, well, skating is like a hobby.  Only it is not.

Kayla is a star.  She is brilliant on the track and she can compete and win but no one in her family sees it that way, she even doubts herself because she feels completely alone, much more so now that she moved from Canada to London and lost her artistic partner, Jacob. They had that special connection, they interpenetrated, they understood each other without speaking, it was something instinctive.

Zero Chill Season One Review: “What Dreams Are Made Of”

Kayla feels that her family does everything because Mac’s career takes off but does not do anything for her, they do not even make an effort, she feels that they don’t support her or her dreams and, ultimately, it feels like a second course.  And she is right.  Her parents treat her just like that.  Kayla needs someone to blame, and she blames her brother Mac for it, although he, despite behaving like an asshole many times, is not to blame for this.

And I don’t understand Kayla’s parents, I really don’t like them.  Her daughter is there too, she exists too, she has dreams too … and they seem capable of sacrificing her just for Mac to shine.  They forget that they do not have a child, if not two.  You just wait all season for them to realize this damaging relationship, that they are hurting their daughter, but it is not until the end that they learn that encouraging the dreams of one of their children doesn’t mean crushing those of the other.

As Mac struggles to gain a foothold on the team, balancing his need to shine, Kayla must adjust to a new life in which she can’t find her place.  She seems to find a way out when a mysterious skater makes his appearance and gets as close to him as she did to Jacob.  Only that skater is actually Sky, her best friend.  She was a famous skater who due to her illness she cannot skate again because of the risk that this entails.

However, skating is Sky’s life and to feel the ice under her feet again, the air ruffling her hair during a jump … she feels at home.  So she decides to take a chance and skate alongside Kayla.  But she has an accident, she falls and … everything seems to end even before it begins.

This makes Sky have to give up her dream again, have to say goodbye to her great love again and Kayla has to rethink what to do without Kayla and without Jacob, whose parents have taken it upon themselves to match him with someone else, someone who think that winning justifies everything.  That brings her closer to a certain extremely tough coach for whom winning also justifies everything.

This leads us to analyze another family dynamic, that of Kayla’s father’s boss and Mac’s team coach. He is divorced and his daughter Ava, who is a skater, trains with her demanding mother Elina – I would call her a bitch but I hold back.  – but no one asks her what she wants to do.  Because she doesn’t want to be a skater, she wants to be an ice hockey player.  Her parents laugh at it when she finally dares to verbalize her dreams, they ridicule her hopes.

Ava wants to follow her dreams and wants her father to be proud of her, to see her.  She always sees him training the team, looking for something special and she has that special spark, she is that special person but her father doesn’t even realize it, he doesn’t value her … even when she manages to join the team, her father is not capable  to congratulate her, to show pride and think that she will leave the team sooner or later.

Until Ava puts the dots on her i’s.  That is her dream and if neither her parents are willing to support her, she will do it alone, she will fly alone, but she will fly, she does not intend to let them ignore her again and try to turn her into someone like it’s not she is.  That’s when her father realizes how strong and brave her daughter is and he really sees her.  It is then that he, for the first time, treats her as an equal.

Meanwhile, Kayla enters the dark game of Elina who tries to isolate Kayla by distancing her from friends and family because, in her mind, it is the right way to win.  And Kayla gets carried away because everyone tells her that she can’t get it and she’s determined to get it done.

Then, the key moment arrives and Kayla doesn’t quite work out her first exercise.  For Elina, that strategy of riding alone works but it doesn’t work for Kayla.  She needs her friends, her family, next to her and that they are not … this is killing her.  But they show up to see her, to cheer her up, to support her like they have never done before and Sky returns ready to skate with her.

They both skate together, they fly together and it is an incredible moment, for them and for the world.  Unfortunately, the female partners are not accepted in the competitions and Kayla is disqualified, with the consequent anger of Elina but it doesn’t matter.  Kayla has there, next to her, everything she wanted to have.  To her family supporting her, fighting for her and her dream, her best friend on the track, as an artistic couple who is capable of changing the world, blowing it up and building a new one.

And they are willing to do just that.  That female partners are not allowed in competitions is an absurd and retrograde rule, they are determined to fight to change that, to revolutionize the world of skating.  And we will accompany them every step of the way.

In the midst of all this, what happens to Mac?  Well, he has one of the best evolutions that we see in a show.  Mac at first behaves arrogant.  He is so good that he was chosen to be part of this team, his family supports him so he has it all.  This is, at first, Mac is a bit of a jerk.  But, as the episodes progress, he changes.

Mac learns to work as a team and not to compete with his sister, but to support each other and, above all, he learns the value of friendship and loyalty.  At one point in the story, Mac reaches a turning point.  He has to decide between taking his career even higher, betraying his team and changing the life of his family or staying where he is and living that experience.

Mac does the right thing in the end and doesn’t betray his team and when it seemed like he had that he missed that great opportunity, they offer it to him again.  So the dilemma is still right there.  And this time, Mac is more adult, more mature and thinks about what his career would be like if he moved … but also what it would be like for his family, specifically, his sister.  She has just found her new artistic partner, her friend, she has just adapted and started to cement her dreams, if he accepts that offer, all that would end and her sister’s life would be broken again in a very short period of time.

Mac just can’t do that.  So he turns down that great offer to put down roots right where he is and give her sister the chance to follow her dreams.  This is how he ends the show, with Mac, Kayla and Sky together, united.  As friends, as family and, as for Sky and Mac, maybe something else.  Because it is undeniable that the two of them have something, they have this spark … that I hope they can explore in a season 2 because I love them together, they have always supported each other, even when it was difficult, they have always made it clear how important they are to each other. I ship them like crazy!

As we mentioned at the beginning, this show is familiar, bright, a comfort show that really makes you finish it with tears of pride in your eyes and a huge smile.  It makes you finish it by being ready to join Kayla, Sky, and Mac and change the world together.  It’s the best feeling a show can leave behind and we hope Zero Chill can have a season 2. We won’t hesitate to see it, and you?