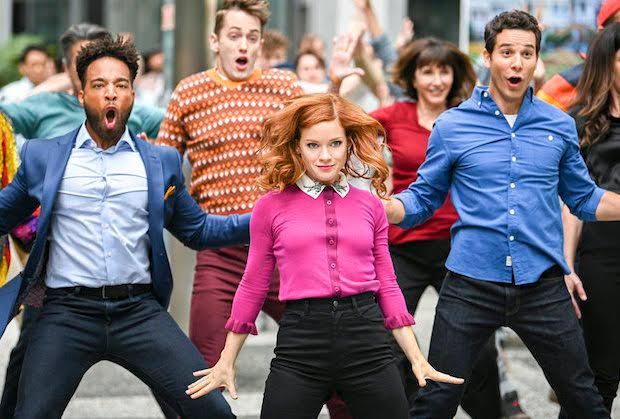 There are two main theories about how the commercial broadcast networks can continue to compete against the onslaught of such streaming video operations as Netflix, Amazon, Hulu and Disney+. One is to attack them directly by offering the same sort of unusual and imaginative programming. The other is to retreat — and offer familiar comfort food, like police procedurals.

NBC is mostly playing it safe, though it does have the bold and brilliant sitcom The Good Place, which returns this week to show its final batch of episodes. (It was my favorite TV series of last year.) And now another new NBC series shows promise — and is a definite risk. It’s called Zoey’s Extraordinary Playlist, and the title role is played by Jane Levy, star of ABC’s Suburgatory.

Before the show unveils its central gimmick, Zoey is just another computer coder at a typical San Francisco tech company. The characters and dialogue start out arch and artificial, but the roles are played by very good and likable actors, including Mary Steenburgen and Peter Gallagher as Zoey’s parents, and the equally wonderful Lauren Graham, from Gilmore Girls and Parenthood, as her boss.

At first, Zoey’s Extraordinary Playlist is nothing special, but then comes the show’s go-with-it premise: Zoey goes to the doctor for an MRI, which is made less claustrophobic by adding music to the procedure. While she’s there, an earthquake overloads the system and bombards Zoey with musical input as her brain is being scanned.

Slowly Zoey discovers that she occasionally hears — and sees — people express their inner thoughts through music. The rules are fluid. In one scene, it seems like all of San Francisco is singing The Beatles’ “Help!” In another, she hears the quiet, depressing inner thoughts of one seemingly happy co-worker.

It’s the addition of music that is the rarity — and the risk — here. When employed imaginatively, it can be great: Think of the stand-alone musical episodes of Buffy the Vampire Slayer or Ally McBeal, for example. Or, as the very best examples in TV history, think of Dennis Potter’s astoundingly powerful dramas with music, the British miniseries Pennies from Heaven and The Singing Detective. Now those were extraordinary.

Zoey’s Extraordinary Playlist isn’t in that league — but Austin Winsberg’s show, like its characters, comes to life once the music element is introduced. That’s never more true than when Zoey is alone with her father, Mitch.

Mitch suffers from a degenerative neurological condition, which has left him unable to speak or move much. But Zoey confides in him anyway, and that’s where Levy and Gallagher get to act and react — and reach the audience. Zoey sits on the couch next to Mitch — his face slack-jawed, staring blankly ahead — as she reveals what has happened to her, and how emotionally raw she is. Then Zoey gets up from the couch and looks at a framed family photo on the wall — one showing her and her dad in happier, healthier times — and suddenly, we see Mitch’s face in the reflection of the glass. Standing behind her and smiling, he begins to sing Cyndi Lauper’s “True Colors.”

If that small taste doesn’t intrigue you, you probably can skip this show. Movies like La La Land,and even TV shows like Crazy Ex-Girlfriend, may have made the mixture of music and drama easier for younger viewers to approach, but there’s no denying that this new NBC series is an acquired taste.

And NBC is making it particularly difficult to acquire. Zoey’s Extraordinary Playlist doesn’t fully hit its stride until the second episode, which starts with Levy leading the whole company on a musical daydream set to Thelma Houston’s “I’ve Got the Music in Me.” But after Tuesday’s sneak preview, NBC isn’t showing that episode — or any other — for more than a month. That’s not a programming strategy to sing about. But at least Zoey’s Extraordinary Playlist isn’t another police procedural. Or a musical one. What — you think I forgot about Cop Rock?