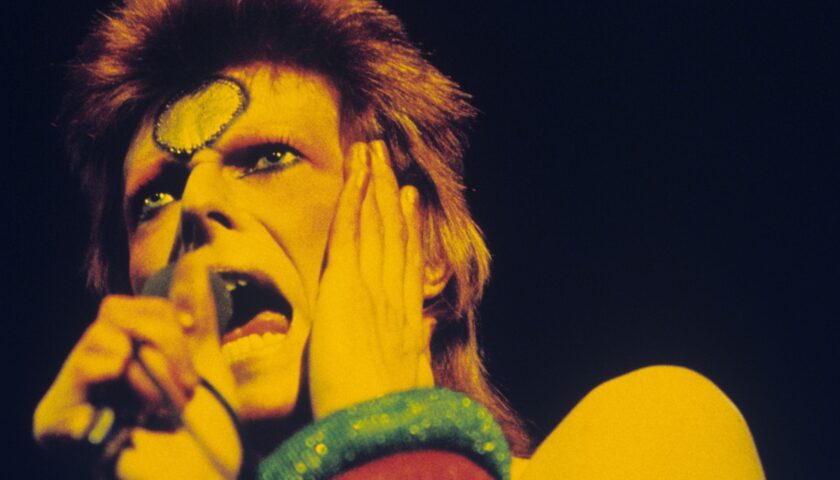 Never a Dull Moment, the superb book that inspired this up-close look at a cultural renaissance, is unequivocal: The early ’70s, says author David Hepworth, were “the most febrile and creative time in the entire history of popular music,” and 1971 was “the most innovative, most interesting and longest-resounding year of that era.” To those who weren’t there, and maybe even to some who were, that might sound like boomer bragging. Until you take a look at the evidence, as 1971 does in eight potent installments.

That evidence includes The Who’s Who’s Next, Marvin Gaye’s What’s Going On, Carole King’s Tapestry, The Rolling Stones’ Sticky Fingers, Gil Scott-Heron’s Pieces of a Man, Janis Joplin’s Pearl, and Sly and the Family Stone’s There’s a Riot Goin’ On, to name just a few of the landmark albums that were released during the 12-month period. But the series goes beyond the charts to also explore music that was being written or recorded, or was first performed in concert, in ’71. The riches only deepen.

Devoid of talking heads, 1971 consists entirely of archival footage, augmented by the audio from interviews both vintage and newly recorded. As a work of curation, it’s endlessly eye-opening, even for those well versed in the period — no surprise given that Asif Kapadia, a master of the archive documentary (Amy, Senna), serves as series director. Some of the material has never before been presented publicly, and all of it stands well clear of overused sound and video bites and clichéd narratives. (The indispensable Dick Cavett Show and the no less essential but lesser-known Soul! are the sources of several extraordinary clips, welcome reminders of a time when real conversation could and did take place on TV talk shows, a stark contrast to today’s well-oiled PR machinery.)

Kapadia oversees the show as a whole, and individual episodes are helmed by James Rogan and series producer Danielle Peck — four each, all of them clocking in around 45 minutes. Even at six hours altogether, 1971 could never be an encyclopedic survey, though lesser filmmakers might have tried. To this team’s credit, the series never reaches for a grand-gesture summing-up. Instead it drills in on turning points in the careers of particularly influential and emblematic artists. Following radial through-lines, it reveals the six degrees of separation among seemingly disparate figures or unrelated topics. At times the flow is discursive and conversational; at others the story progresses by jumps and jarring juxtaposition. Some episodes overlap. There’s never a sense that the doc is designed to prove a preordained point.

But it does embrace a wider view, of the historic clash between a rising counterculture with its heightened political consciousness (women’s liberation, the Black Power movement, gay pride) and the status quo (Nixon and the silent majority, the war on drugs). As the first and longest installment quickly establishes, in 1971 the Vietnam War was the crucible dividing Americans. The previous year’s deadly shootings of protesting students at Kent State became a flash point. One of the episode’s voiceover commentaries is by Ohio native Chrissie Hynde. “We loved Neil Young,” she says, referring to “Ohio,” his song about the killings. (There’s no mention of Daniel Ellsberg’s leak of the Pentagon Papers’ in 1971, which exposed years of government lies about the war — but didn’t inspire a single.)

At the core of the series is the idea that the period’s young artists were making music that didn’t just reflect the times but also shaped them, providing catalysts for awakening and change. Hepworth, who’s British, focuses on the U.K. and the States (with one quick stop in Berlin), as does the film. But Kapadia and company also spend significant time on specifically American matters of racial unrest. The fifth episode, named after Gil Scott-Heron’s oft-quoted “The Revolution Will Not Be Televised,” reveals that in ’71 he wrote the less-famous “No Knock,” whose lyrics still feel so painfully timely that they could have been a response to the 2020 killing of Breonna Taylor. Though she might not be thought of as a political artist, the doc shows how Aretha Franklin supported the revolutionary Angela Davis and gave voice to the Harlem community’s grief after the Attica Prison uprising ended in a bloodbath.

In March, a lineup of Black artists, including the Staple Singers and Ike and Tina Turner, traveled to Ghana to celebrate the country’s 14th anniversary as an independent democracy with the Soul to Soul concert. The chosen footage is remarkable for its intimacy and its kinetic power, zeroing in on the ineffable emotion of Black performers connecting with a Black audience — but also on the dark emotional drama that Tina Turner had to navigate, even while delivering a showstopping performance.

A different kind of darkness, the lure and gloom of heroin, pierces the sunny Mediterranean atmosphere during the Stones’ sojourn to Provence, a move that began as an escape from the U.K. taxman and ended as an escape from the Marseille mob. Journalist Robert Greenfield, who got to hang with them and a cast of thousands at Keith Richards’ rented villa, describes “a scene of major proportions.” The band rose from the sordid ashes with a triumphant tour and Exile on Main Street, today one of its most highly regarded albums.

The theme of reinvention finds especially strong expression in the sequences devoted to David Bowie (and is reinforced in the way the series’ final image, of Billie Eilish, has been rendered outdated in recent days). Before Bowie’s thrilling incarnation as Ziggy Stardust, the doc showcases a tentative newbie on his first visit to the States. At Warhol’s Factory he doesn’t quite wow the crowd with an awkward mime routine. “We were fed up with the hippies,” Bowie declares in voiceover. “We wanted to go somewhere else.” At least as turned off by the “syrupy … stupid … hippie love thing” was Alice Cooper, who married Grand Guignol to rock ’n’ roll.

At the same time, the soul-searching singer-songwriter was on the rise — explored here with a focus beyond the usual Laurel Canyon contingent. Many looks back at the period reduce the generational and cultural rifts to clean breaks; placing the accent on cross-pollination, 1971 refuses to do so. This was the year of the Manson verdicts and the Stanford Prison Experiment. This was the year Soul Train became a nationally syndicated show, and George Harrison and friends gathered at Madison Square Garden for the Concert for Bangladesh, the first super-benefit show (scalpers were charging a whopping $35).

One of the series’ longest sequences that’s seemingly not about music at all, and drawn directly from Hepworth’s book, zeroes in on key scenes from the groundbreaking reality show An American Family (filmed in 1971, it premiered two years later). And yet this section is about music: When 45-year-old Pat Loud tells her philandering husband precisely what she thinks of him, she begins by quoting a Carole King lyric. It makes perfect sense that the series often displays song lyrics onscreen — this was an era of poring over album gatefolds and lyric sheets. People were listening, and the words mattered.