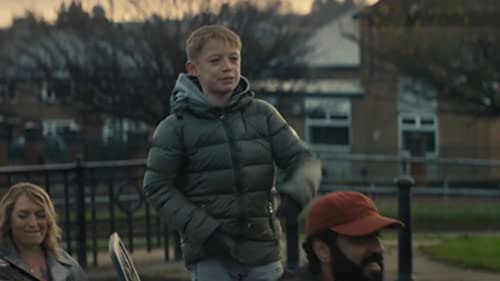 Maybe she was kidding, but director Clio Barnard recently described “Ali & Ava” as her shot at making a “social-realist musical.” The phrase, which slipped out during an interview from the BFI London Film Festival, struck me as some kind of oxymoron at first: How could a rugged, true-to-life depiction of a struggling working-class English couple possibly coexist with that most surreal of cinematic genres? But in light of the end result, Barnard’s ambition makes perfect sense. The film’s two title characters don’t burst into song out of the blue but rather, listen to music as an escape from their everyday stresses. It’s the force that brings them together.

Embodied with equal parts weariness and good cheer by British Pakistani actor Adeel Akhtar (“Four Lions”), Ali is a Yorkshire-based ex-radio DJ who gravitates to dance and electronic music. An Irish transplant to the region, Ava (Claire Rushbrook) is more of an old-school country and folk fan. The two characters are separated by an age gap, a class divide, a difference in cultures and their incompatible taste in music, and yet, love crosses all those barriers.

By the end, they’re each listening to one another’s favorite tunes, a gradual coming together that reminded me of the gesture that made Nick Hornby’s “High Fidelity” so effective. There, John Cusack played a music snob who goes from giving his crush a mix tape crammed with his favorite songs to making one full of tracks he knows she will love. That step shows he’s matured enough to put himself in her shoes. Along the same lines, the beauty of the small but lovely “Ali & Ava” comes in watching these two souls lean into one another, evolving for the better in the process.

A native of Northern England, Barnard has been making movies in and around the city of Bradford since her striking 2010 debut, “The Arbor,” a high-concept documentary portrait of local playwright Andrea Dunbar. That movie acknowledged the toughness of the community while floating above it, putting a stylized distance between audiences and the world it depicted. In her three subsequent narrative features, however, Barnard embraced the grubby naturalism of real life, following in the tradition of England’s great kitchen sink dramatists — Tony Richardson, Lindsay Anderson, Ken Loach, etc. — and it’s this format she ever so slightly seeks to expand with the still-grounded “Ali & Ava.”

Like “The Arbor” and Barnard’s also-great “The Selfish Giant,” this latest film takes place in Bradford, where we meet Ali climbing on the roof of his car and dancing out his frustrations in the fog. Ali’s a Pakistani immigrant still living with soon-to-be-ex-wife Runa (Ellora Torchia), since neither of them quite knows how to break the news to his folks that the relationship is over. The couple wanted to be parents but lost the baby, and now, the house they share feels like the loneliest place in England.

Strong but sensitive, and a grandmother five times over, Ava works as a classroom assistant at a Bradford elementary school. Her husband died a year earlier, and despite regular interactions with her kids — including needy adult son Callum (Shaun Thomas) — she’s never felt more isolated. For those who recognize Rushbrook (the actor playing Ava) as Brenda Blethyn’s daughter in Mike Leigh’s “Secrets & Lies” a quarter-century ago, there’s the satisfying suggestion that she’s grown into the maternal role here: a parent whose kids can’t seem to fathom that her personal life might contain any dimension beyond them.

Ali and Ava meet on a typical enough day after school. He’s picking up the girl who lives in the flat he rents to her immigrant parents, Ava is waiting with her in the rain, and in an act of spontaneous kindness, Ali offers Ava a ride. Her home is on the other side of Bradford in Holme Wood, a council estate where taxis refuse to go, since the residents are known for pelting outsiders’ cars with stones. The film’s first memorable use of music comes as his car is being barraged. Ali puts on a track by neighborhood favorite MC Innes, and suddenly, the hostiles have dropped their rocks and are dancing along.

The next time Ali and Ava meet, he has his headphones on, and she’s got folk playing on her earbuds. With just a little bit of ingenuity, they find a way to enjoy their conflicting musical preferences in one another’s company. As things tentatively build between them, the film hits some conventional beats (her kids aren’t ready for Mom to date; she hasn’t brought herself to tell them the truth about what an abusive jerk her dead husband was) but mostly charts its own course, never making too big a deal about the race issues so central to other cross-cultural relationship movies.

Inspired by two real-life people Barnard met in Bradford, “Ali & Ava” has been saddled with comparisions to Rainer Werner Fassbinder’s wonderful “Ali: Fear Eats the Soul,” and while the similarities are no accident, Barnard has made a very different movie. For better or worse, there’s none of the heartbreaking pathos of that lopsided arrangement, where both parties seem to be using the other to some extent. Here, there’s a lovely sense of equity, as two people typically defined by the ways others perceive them (as mother/son, teacher/landlord, white Irish woman/brown Muslim man) see one another for who they really are. And let’s not forget that Fassbinder’s movie was itself an homage to the cinema of Douglas Sirk, so the cycle of inspiration turns once again for another generation. To quote a Specials song these two kindred spirits appreciate in common, “This is the dawning of a new era.”